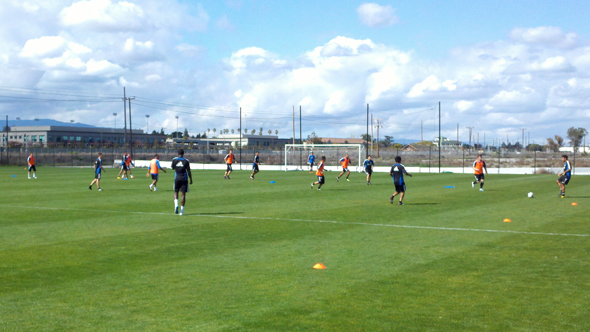 The San Jose Earthquakes train at the NTF ahead of their preseason match against the Colorado Rapids in San Luis Obispo on Friday, March 4th. Photo; Robert Jonas, centerlinesoccer.com.

The focus of attention around the San Jose Earthquakes was on the stadium site Demolition Day ceremonies, but for the players it was instead turned to their morning practice session at the adjacent Nutrilite Training Facility. With warm temperatures bathing the field, most of the Quakes were in action for the abbreviated session, in preparation for their road trip to San Luis Obispo to take on the defending MLS Cup champion Colorado Rapids in a Friday night friendly.

Earlier in the week, Jason Hernandez, Scott Sealy, and Bobby Convey avoided any full speed training in an effort to keep injury recoveries on the recommended path. However, on Thursday morning all three were participating in the session ending 10 v. 10 short-field scrimmage, with Sealy in particular impressing in his first full workout of the preseason. After training he revealed that he is still aiming to be at 100% health by the season opener in just over two weeks, and rated himself at 75% currently. Coming off abdominal surgery — a procedure similar to sports hernia surgery — Sealy recognized that he needed to begin inserting himself more in the conversation regarding the home opener starting XI. Slotted to be a striker or attacking midfielder, the Trinidadian will need to climb over possible starters Chris Wondolowski, Khari Stephenson, Ryan Johnson, and Steven Lenhart to be on the field at the opening whistle against Real Salt Lake.

Sealy has been much of an afterthought to Earthquakes fans ever since his return to the club last spring, but when at full health he expects to be a major contributor to the team. He showed great form toward the end of the 2008 season, but that was three years ago, and the Quakes’ roster depth is much greater. Sealy remains confident that fans have not yet seen the best he can offer on the field, and intends to put pressure on head coach Frank Yallop to make him a regular player in the match day line-up for the 2011 season.

Back to the scrimmage, Hernandez and Convey appeared to take the action lightly, wisely so as both have been dealing with nagging ailments all preseason. While some of these training games can get quite heated, Thursday’s play was solid but often muted for many involved. Positionally, Hernandez vacated the center of defense to Brandon McDonald and Ike Opara while stationing himself on the right wing in place of the injured Tim Ward. Ward’s injuries are not serious, but he was again held out of scrimmaging as a precaution. Same for midfielder Brad Ring, who is quickly getting himself back from a knock suffered on Tuesday.

The man-of-the-match for the scrimmage was outside midfielder Joey Gjertsen, who has been in solid form from the start of preseason training camp. He knocked in a goal and had numerous scoring opportunities from his preferred right side of the field, and was constantly looking to find shots on goal when near the area. But before anyone fear that he is doing an Arty Alvarez impersonation, Gjertsen still displayed a nice touch on crosses into the area, and once found Wondo for a slick finish. At the beginning of the 2010 season, the newly signed Gjertsen made a positive impression on the coaching staff and looked destined to be an impact player for the Quakes. Unfortunately, a series of injuries and the need for surgery left him fighting to return to that level of form over the remainder of the season. With time off over the winter, Gjertsen looks poised to begin the 2011 season in the starting XI.

With the Demolition Day ceremonies slated to start at noon, practice was cut early and the players made their way through the FMC to join the festivities. Next up for the Quakes is tonight’s preseason match with Colorado, then a return to San Jose for a full week of training at the NTF. The starting line-up for the Earthquakes should look familiar to most, but was not finalized as of yesterday morning. Players carrying injuries will be reassessed in pregame warm-ups by the coaching staff before a decision is made on whom takes the field. Either way, the match should prove to be a good testing ground for how the team looks at this stage of the preseason. Check back at Center Line Soccer for reports from San Luis Obispo over the weekend and from San Jose throughout the week.