San Jose Earthquakes training report for Tuesday: Welcome back to the NTF

Share All sharing options for: San Jose Earthquakes training report for Tuesday: Welcome back to the NTF 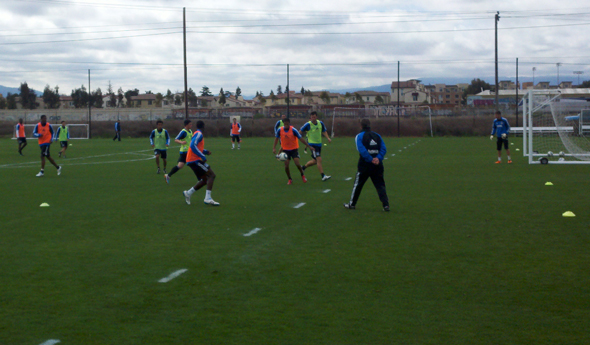 With less than two weeks remaining before their MLS season opener, the San Jose Earthquakes enter that phase of the preseason when the players want to keep sharp without getting injured. Or, in the case of those players not at full health or late to the proceedings, they will measure up with in-form teammates to see how much farther they need to physically push themselves to get fully match fit. Tuesday morning’s team training session illustrated that mentality for the 23 Earthquakes that participated at the Nutrilite Training Facility.

The roster of players at full health included 18 field players and all three goalkeepers. Jon Busch, who took quite a knock to the face at the conclusion of last Friday’s match against the Colorado Rapids, was back to his regular self on the day. He showed no ill-effects from the aerial collision with the Rapids Drew Moor, other than a slightly swollen bridge of the nose. Combine that with the ripped ear he suffered at the conclusion of the 2010 season, and Busch continues to take on the appearance of a gritty goalkeeper. Among the field players back in action was Jason Hernandez, who has been slowly returning from a calf strain suffered earlier in the preseason. The longest tenured player on the roster, Hernandez will be expected to anchor the defensive line come the home opener against Real Salt Lake.

The team was split into three squads of seven players each for fitness and finishing drills over the first hour of the morning, before ending practice with a round-robin of scrimmages on an abbreviated field. Team Orange consisted of Busch, Ryan Johnson, Justin Morrow, Khari Stephenson, Ike Opara, Brandon McDonald, and Bobby Convey. They finished first in the scrimmage series courtesy of some clinical shooting from McDonald. Since these games were played on such a short field, the players were not positionally confined and roamed throughout the entirety of the space available. Twice McDonald found the back of the net from just outside 15 yards with powerful shots, and would have tallied a third if not for Opara getting in the way of a shot destined to elude Team Yellow ‘keeper David Bingham. Fortunately for Opara, the shot to the face was quickly shaken off, and he continued to play after a short break. 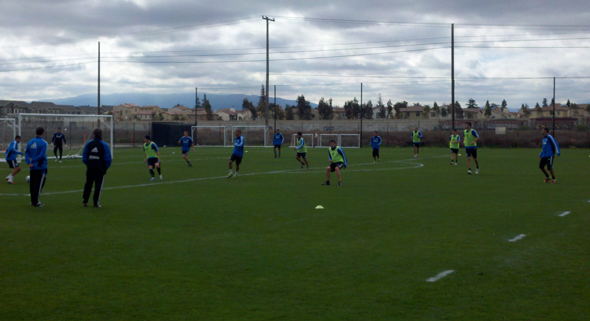 Team Blue — the team not wearing florescent bibs — featured a line-up of Andrew Weber, Matt Luzunaris, Sam Cronin, Chris Wondolowski, Anthony Ampaipitakwong, Steven Beitashour, and Jason Hernandez. Wondo and Ampai were the stars of the day for Blue, with the Akron rookie netting a nice goal in a draw against Yellow. Wondo continued to show his development with strong efforts off his right and left boots. The Golden Boot winner already looks to be in midseason form.

Team Yellow had the toughest results in the day, finishing without a win in the scrimmage series. The team saw Bingham, Bobby Burling, Joey Gjertsen, Brad Ring, Rafael Baca, Ramiro Corrales, and Ellis McLoughlin take to the competition, but goals were hard to come from. Burling was the beneficiary of a deflected cross that found him alone at the far post for a easy headed finish, while Gjertsen had the nicest looking goal of the morning when he coolly back-healed a Ring pass past a wrong-way leaning Weber in goal. For Gjertsen, the goal marked a good day on the training field, as he continues to look in even better shape and form than he showed at the beginning of last season. Gjertsen has played the vast majority of preseason minutes available at the right wing position, and looks set to cement that place in the starting XI if he stays healthy for the next two weeks. 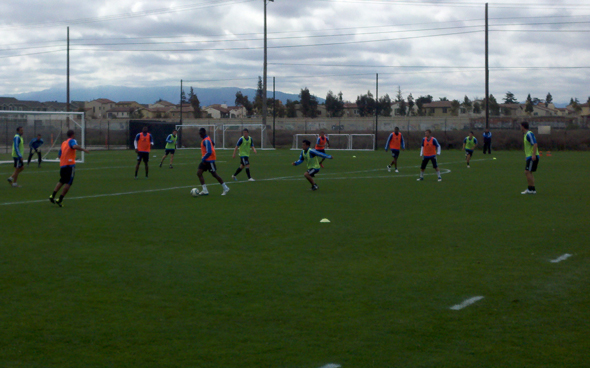 As mentioned above, Hernandez has graduated from the walking wounded club to get back into full-speed action, as has projected left winger Bobby Convey. The speedy midfielder played the second half of the Colorado Rapids friendly in his first action of the preseason, and looked comfortable today showing no sign of the calf strain that sidelined him in early February. Head Coach Frank Yallop was pleased to see him back to health and stated his expectations that Convey will have an even better season than in 2010. He noted the goals scored against New York in the playoffs as indicators that Convey had a scoring mentality that Yallop would like to see more of in 2011.

Training off to the side was a pair of defenders both trying to get back up to speed. Chris Leitch and Tim Ward — coincidently both right backs — were put through a series of off-ball drills that focused on speed and agility. It is still too early to know if either will be healthy enough for the opening day roster, but they are not too far away from returning to the field to join their teammates in full speed play.

A check inside the infirmary revealed that Omar Jasseh is seeking treatment for a hamstring injury suffered in Saturday’s preseason match against Cal Poly. After playing a quick 30 minutes against Colorado the night before, Jasseh was removed from the Cal Poly game as a precaution and is expected to rejoin the team before the end of the week. Time is running out for the young midfielder to compete for playing time to start the regular season, but perhaps he’ll be better served taking some time with the reserve side. Joining Jasseh in the training room was Scott Sealy, who returned to practice last week and was going at 75% in his words, but needed to take a step back as he continues his rehabilitation from abdominal surgery. Coach Yallop said Sealy may still have an outside chance to make the opening day line-up, but only as a substitute. He went on to say he has encouraged Sealy to get back to full health before attempting to push himself to get ready and potentially suffering a set-back. Andre Luiz is still in treatment and the timetable for his return has not changed (late April/early May).

No news on the loan signing of Simon Dawkins, who remains in England awaiting the completion of negotiations between MLS and Tottenham Hotspur. General Manager John Doyle remained optimistic that a deal could be reached very soon, but acknowledged the difficulties in making something work within the framework of MLS policies. Still, if a loan contract can be agreed in an immediate time-frame, Dawkins can begin the process of securing a work visa and could be with the team within a week of signing.

Coach Yallop indicated that training sessions for the remainder of the week would be used to maintain fitness, rather than push the team any further, so expect more training days like today. Real Salt Lake beckons in just 11 days, getting rested and healthy for the season opener is priority number one.