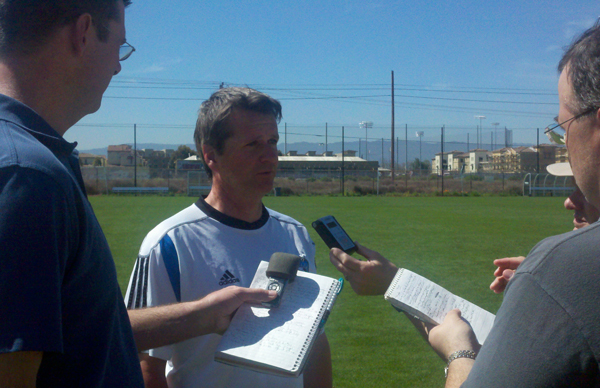 Call it the calm before the storm — and no, I am not tempting the weather gods to unleash another monsoon on Buck Shaw Stadium — as Friday morning the San Jose Earthquakes went about a relaxed training session ahead of tomorrow’s MLS match with the Seattle Sounders. Under bright skies the Quakes went through a variety of fitness and technical drills in what has become a normal occurrence for the team the day before a game. The players kept loose with long passing drills, one v. one and keep-away work, and an end of training finishing session. With the starting line-up set for the visit of the Sounders, all that was left to do on the day was for Head Coach Frank Yallop to check in with the guys and provide individual instruction when necessary.

Coming off a 2-0 road win at FC Dallas, coach Yallop indicated that he has no plans to change the starting XI on Saturday. I don’t find this too surprising given that he doesn’t have a track record of messing with a good thing. With all eleven starters healthy following the Dallas match and a week of training, the more interesting selections come when filling out the bench. Players that figured to be in the mix by this point, but will not suit up tomorrow are Tim Ward, Andre Luiz, Scott Sealy, and Omar Jasseh due to injury, and Steven Lenhart due to personal reasons. Notably, Khari Stephenson, who started the first regular season match for the Quakes and recently returned from International duty with Jamaica, will not regain his spot in the starting XI, as newcomer Simon Dawkins will remain in place. Stephenson looks more likely to be in the match-day 18 instead.

“I think the chemistry was good against Dallas and that Simon (Dawkins) played well,” said Yallop after training. “I spoke to Khari (Stephenson) that it was unlucky that he goes away and then doesn’t get a chance to start, but we a very long season. Many guys are going to get their chance to play, including Khari, and he’ll be ready to come onto the field and be ready to contribute at that time.” 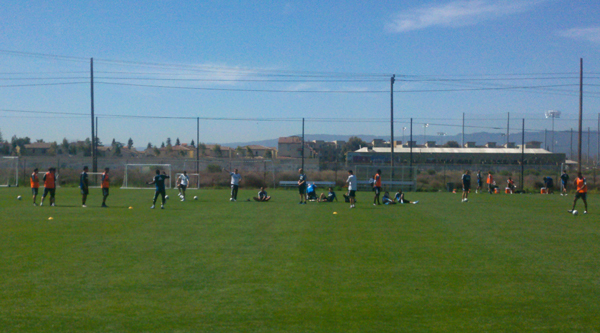 The atmosphere at Friday's San Jose Earthquakes training was relaxed, not difficult to accomplish in the beautiful sunny weather at the Nutrilite Training Facility. Photo: Robert Jonas, centerlinesoccer.com.

From watching the players train on Friday, my best guesses as to who will join Stephenson on the bench tomorrow night are Ike Opara, Brad Ring, Ellis McLoughlin, Anthony Ampaipitakwong, and Matt Luzunaris. Perhaps Steven Beitashour gets a look as another defensive substitute in place of forward Luzunaris, especially as cover for Ramiro Corrales as he tends to a sore hamstring, but as happened in Dallas, Opara can be very effective off the bench and is more than capable of filling in along the defensive four. For all the Earthquakes who do not make it into the match Saturday evening — and maybe for some that do — the Sounders will remain in San Jose for the weekend and send out their reserve squad to face the Quakes reserves on Sunday morning. Tentatively scheduled for 11 a.m. at the Nutrilite Training Facility, be sure to bring your own chair if you plan on attending.

One last note of interest from Friday morning was seeing former Chivas USA forward and San Jose native Jesus Padilla training with the team. Padilla was recently released from his loan deal at Chivas USA from their parent club in Mexico, Chivas de Guadalajara and is currently looking for a new club. He has expressed interest in staying in MLS, but is ready to return to Mexico in the summer if he is not picked up. Given that the Earthquakes are near their desired roster number, Padilla’s stint with the club looks to be as much about staying in competitive shape as it is a proper trial.