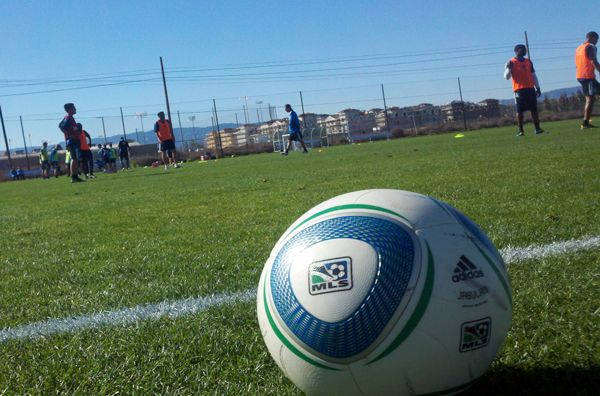 The San Jose Earthquakes train in earnest at the Nutrilite Training Facility in San Jose ahead of their road match against the New York Red Bulls. Photo: Robert Jonas, centerlinesoccer.com.

With a determination born from their disappointing draw with Toronto FC last weekend, the San Jose Earthquakes trained in earnest this week in preparation for their away match against the New York Red Bulls this Saturday (4:30 p.m. kickoff PDT, check your local TV listings) at Red Bull Arena. The starting XI from the 1-1 draw with TFC remains healthy, and looks poised to stay intact this weekend. Head Coach Frank Yallop suggested he might tinker a bit with the formation and player positioning, but that he was satisfied with how the players are performing in the system thus far this season and that the goals will come.

“We are playing better soccer now than we have ever played,” said Yallop when asked how he rated the team since they rejoined the league in 2008. “The chances we are creating and the general play have been great. We can’t just say it is a case of stepping it up. I know what Jon (Busch) is saying, and it is hard to keep a clean sheet in this league, so we have to score one or two goals to win games. I am confident that the team can do that.”

Yallop is of course referring to the comments made by his goalkeeper following the TFC draw where Busch directly called out the offense for not finishing the abundance of scoring opportunities they have created. When asked to comment on Busch’s rant midfielder Bobby Convey refused to argue the issue in the public purview, and preferred those conversations to stay within the locker room.

“We continue to play well,” said Convey deflecting away the criticism from Busch. “We’ve created plenty of chances to score. When you are not creating good chances is when you should start to worry. We just need to keep playing the way we are.”

Tuesday’s training session was predominately held as a full-field 11 v. 11 scrimmage, with the TFC starting XI facing a reserve side made up of Weber, Beitashour, Leitch, Burling, Morrow, Baca, Ampaipitakwong, Ring, Padilla, Sealy, and Luzunaris. Bingham subbed in as well for Weber as the two goalkeepers shared the available playing time. Of note was the play of Scott Sealy, who showed no ill-effects from the shoulder injury that sidelined him last week. Anthony Ampaipitakwong also looked solid as the attacking midfielder and said after practice that the back injury he suffered against the Seattle Sounders reserves was fully healed. Players not participating in the scrimmage, but still present and doing fitness drills on the side were defender Tim Ward, forward Ellis McLoughlin and forward Steven Lenhart. Lenhart, who is completing rehabilitation on his knee following preseason surgery, spent the workout doing light drills as he attempts to get back up to speed after being away for personal reasons. His availability for the weekend match against New York remains in doubt.

The scrimmage was a full-effort affair, as starters looked to stay match-fit while the reserves hoped to impress the coaching staff enough that they would join the team on the trip back east. The second-teamers scored the first goal of the game after an overlapping run from Justin Morrow gave him run to maneuver at the byline, and he delivered a fine cross to the opposite side of the area for an awaiting Rafael Baca. The rookie midfielder took a touch to set up Matt Luzunaris in the middle of the area, and the forward placed the ball safely out of the reach of Jon Busch and into the back of the net.

The second goal of the day also came courtesy of the reserves, as late in the second half Ampai swung a ball from right to left and fed Jesus Padilla in the area. The guest player and former Chivas USA midfielder took a shot that Busch saved before scoring off the rebound on an overhead kick to make the score 2-0. Time soon ran out on the starters, and the second-teamers claim bragging rights on the day.

For the starters, the aim of the session looked to be possession work, and at times they did this with effortless ease. Sam Cronin, Ike Opara, and Brandon McDonald dominated play deep in the center of the field, while Simon Dawkins and Chris Wondolowski expertly manned the attacking midfield. The scoring chances came for the first team, but Andrew Weber in the first half and David Bingham in the second half did well to turn away all shots on target. Perhaps Bouna Coundoul will not be as fortunate this weekend.

Players finished the day doing sprints and shooting drills — all working with a focus that suggests they look to the upcoming New York match as a measuring stick for where they stand in the early goings of the 2011 season. With the team’s only loss being against the best team in MLS in Real Salt Lake, there is no feelings of panic among the players that commented after training that the team’s slow start at Buck Shaw is anything of concern. With a distraction-free visit to Red Bull Arena to cap off the week, that business-only attitude will be needed if the Earthquakes want to continue their winning ways on the road.