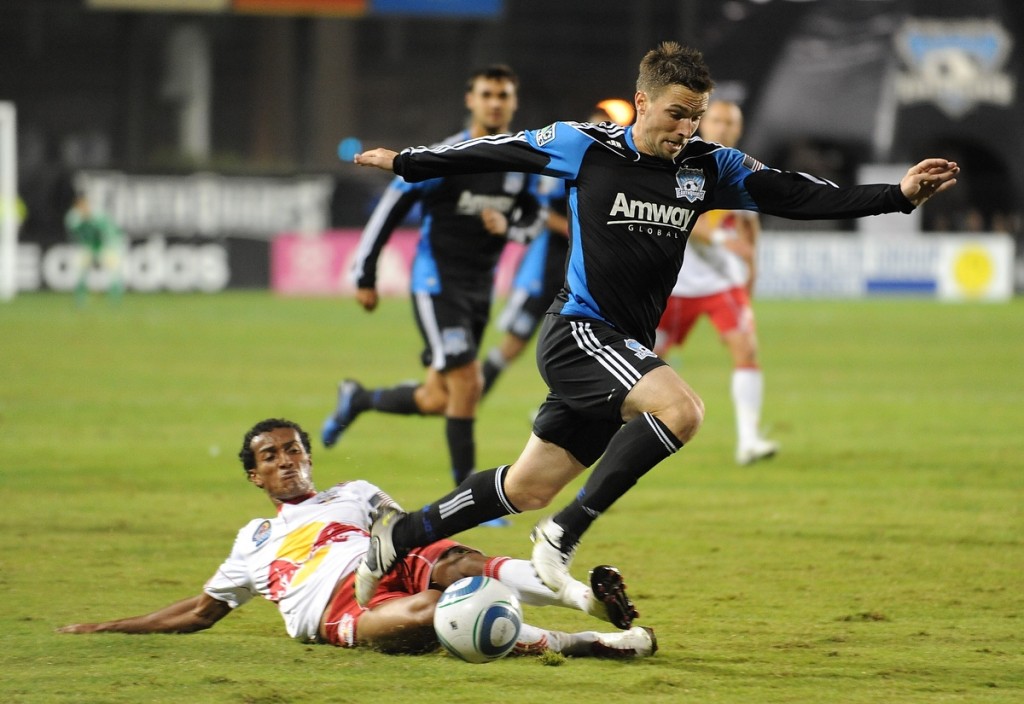 Bobby Convey and the San Jose Earthquakes return to Red Bull Arena looking for another road win in the early stages of the 2011 MLS regular season. Photo: Joe Nuxoll, centerlinesoccer.com.

With a victory deemed most improbable by all but the denizens of the team locker room tucked away in the lower levels of Santa Clara University’s Leavey Event Center, the San Jose Earthquakes announced their return to the upper echelons of Major League Soccer in their 3-1 triumph over the heavily favored New York Red Bulls in the 2010 MLS Cup playoffs. On the backs of midfielder Bobby Convey — who played his best game since returning to MLS in 2009 — and Chris Wondolowski — who rose high to head in the aggregate series winner late in regulation time — the Earthquakes vanquished a foe that many pundits had preordained as the Eastern Conference’s entrant in the Cup Final. Instead, the star-studded Red Bulls squad trod slowly from the field that night, while the boys in blue-and-black celebrated along with a small group of their most ardent supporters.

Today’s match (kickoff at 4:30 p.m. PDT, MLS Direct Kick) brings both teams back to the site of that Earthquakes playoff triumph with many observers again holding the same pre-game perceptions held last November 4th. New York is pegged to again hold court over the Eastern Conference for the second straight season, with international stars such as Thierry Henry, Rafa Marquez, Dwayne De Rosario, and Juan Agudelo populating a roster that reads more like the role call from the nearby United Nations. Meanwhile, San Jose comes into the game sporting few changes from last season, most notably in attacking midfielder Simon Dawkins on a season-long loan from Tottenham Hotspur. Both teams have identical 1-1-2 records after four games to start the season, and both head coaches are busy answering questions on what more needs to be done to score goals and gain more points.

“We are playing better soccer now than we have ever played,” said Yallop when asked about the club’s sluggish start this season in the MLS standings. “The chances we are creating and the general play have been great. We can’t just say it is a case of stepping it up.”

The opportunity to right the wrongs of the early season scoring malaise this weekend against New York is appealing to Convey, who relishes the chance to play again at Red Bull Arena.

“It is a professional stadium, you are not playing in a college stadium there,” said Convey with reference to the Earthquakes home field on the campus of Santa Clara University. “The field is good and the fans are into it, you just feel like a professional in that environment. You want to play well, you want to do well. Not that you don’t want to do well here (at Buck Shaw Stadium), but the excitement is automatic when you go in there.”

Coach Yallop is also looking forward to returning to Harrison, New Jersey, and once again believes his team is prepared to earn another victory.

“We have good memories from our listen visit there,” said Yallop of Red Bull Arena. “We are excited to play another game there and the team is coming along nicely. We are unbeaten in three games. We are not afraid to go anywhere and play, the guys are ready to go and hopefully we can get a good result.”

With both the Earthquakes and the Red Bulls employing more possession oriented tactics this season, but also finding it difficult to find the back of the net, predicting what will happen this evening is difficult. While New York has stated all week that they want to be more aggressive in the attacking third, expect the Quakes to settle in more defensively than in the past four games, and rely in their counterattacks and set piece opportunities to create shots on goal. Either way, with the memories of the playoffs fresh in both teams’ minds, the match should prove to be worth watching.