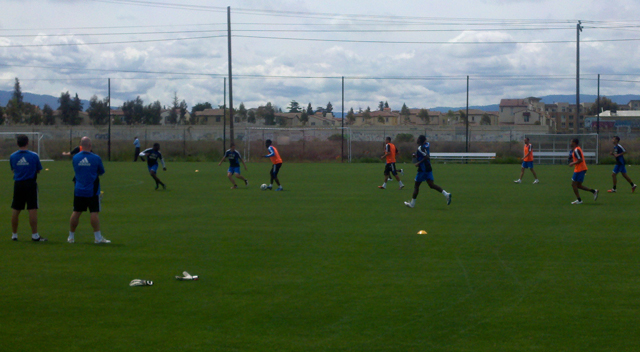 The San Jose Earthquakes took to the training field on Tuesday for their first full workout since being beaten by the New York Red Bulls 3-0 over the weekend. Absent most of the reserve players, who would join together later that evening to face Stanford University in a scrimmage, the extended practice session at the Nutrilite Training Facility saw head coach Frank Yallop put his first team players through a series of drills and exercise. Prior to the on-field training, coach Yallop assembled the entire team for a video session and meeting to discuss the ill-fated trip to Red Bull Arena and what needs to change ahead of this weekend’s visit by Chivas USA.

“The whole team did not defend,” responded Yallop to the question of why the Red Bulls were able to control the pace of the game, “and everyone was too loose in letting New York play with the ball. What I can do is get the guys working and making sure they know I am not happy with it at all. It was embarrassing, and for the guys to have to sit through the video this morning and watch the game again, they are not happy either.”

The Earthquakes fell behind early at Red Bull Arena, and instead of showing a determination to fight back for an equalizer — in the manner by which they have shown they are capable of in their home matches this season — the team showed no sense of urgency on or off the ball.

“From most of the guys, if not all, the collective effort wasn’t correct,” assessed Yallop. “We had a goal scored on us early, but that has nothing to do with it, it was a bad night for us against a good team that played well. When you put those two together it adds up to a loss.”

Putting the math lesson aside, the Earthquakes simply played their worst game as a collective group since the 2010 season finale at Kansas City. While New York seems to have grown into the possession oriented system implemented by head coach Hans Backe, San Jose appears to still be working out the kinks in what at times this year has looked very promising.

“Getting pummeled for ninety minutes,” said Yallop, "we didn’t show well at all, and didn’t find our way back into the game. That is five games we’ve had and one has been terrible — the other four I am happy with. We are growing with our new system, but we need to get back to where we were last year when we were difficult to break down. We broke the clean sheet record for this club last season, and we need to get that back this year.”

A defense-first mentality has been the emphasis for the better part of the club’s three-plus years back in MLS, and certainly characterized the title winning sides from the early part of the 2000’s. Leaking goals through mistakes has proven problematic so far in 2011, and will need to be addressed moving forward if the Earthquakes are going to fulfill their promise and qualify for the postseason. There may still be 29 games left in the MLS regular season, but getting the team back on track is a necessary task for Yallop and the rest of the coaching staff.

“We had a good meeting about it and watched it on video, and it was all around not a good game at all,” Yallop continued when describing the morning meeting. “From most of the guys, if not all, the collective effort wasn’t correct. We’ve addressed it and we have to put that game in the past.”

“What I will say is that our team will play better than it did in New York,” he went on looking toward the weekend match against Chivas USA, “and it will have more effort and desire than it did as a group.”

With the same eleven players that started against New York, plus returning forward Steven Lenhart, participating in training Tuesday morning, coach Yallop focused his drills on ball control and possession for the first half-hour. Playing an abbreviated field 5 v. 5 game of keep-away, where players were paired up and tasked with marking each other and not their teammates, the goal was to move the ball around quickly, but in control. The match-ups were Corrales/Wondolowski, Johnson/McDonald, Dawkins/Cronin, Convey/Opara, and Hernandez/Stephenson, with Lenhart acting as a go-between when part of the drill. Goalkeepers Andrew Weber and Jon Busch entered the drill for the second half-hour, but the field players remained tied together in pairs. The last half-hour of training saw the players unpaired and playing a true 5 v. 5 scrimmage that resulted in Corrales’s side edging Wondo’s side 3 goals to 2.

Training off to the side for the session and not expected to participate in that evening’s Stanford game were Tim Ward and Steven Beitahour. Both defenders were in full motion during fitness drills and light action, but neither is expected to feature with team ahead of this weekend. Lenhart, when not part of the first team scrimmage, concentrated on crossing and finishing drills as he works himself back into shape after being injured or absent from training over that last six weeks.

“It feels good to be active again, but I have a long way to go,” said a subdued but sweaty Lenhart after practice. “The knee is feeling strong, but this is just the second day of training, so I don’t really know how far back I am. It is good to be out with the guys again, and good to be back here (in San Jose).”

Coach Yallop was planning on taking it easy on the returning striker, excusing him from the Stanford scrimmage and giving him enough time to get back into shape, but he would not rule out Lenhart from making an appearance over the weekend against Chivas USA.

“No, no, I don’t think so, but we’ll see,” shared Yallop. “We’ll see how he feels the rest of the week and get him a game under his belt. We have a reserve game this Saturday, so hopefully he can play in that, certainly if he is not included in the regular game.”

After getting the rest of the afternoon off following the team meeting Tuesday morning, the reserves reconvened at Stanford University’s Cagan Stadium to take on the men’s soccer team in a 7 p.m. scrimmage. The Earthquakes emerged victorious by a score of 1-0 following an Anthony Ampaipitakwong goal, while the defense remained resolute against the Cardinal. Next up for the reserves is a match with the Chivas USA reserves at 4:30 p.m. on Saturday at the Nutrilite Training Facility in San Jose. Fans are encouraged to bring their own chairs, as well as their own concessions — In-N-Out Burger is right around the corner…