Share All sharing options for: San Jose Earthquakes train with a sense of urgency ahead of Chivas USA match 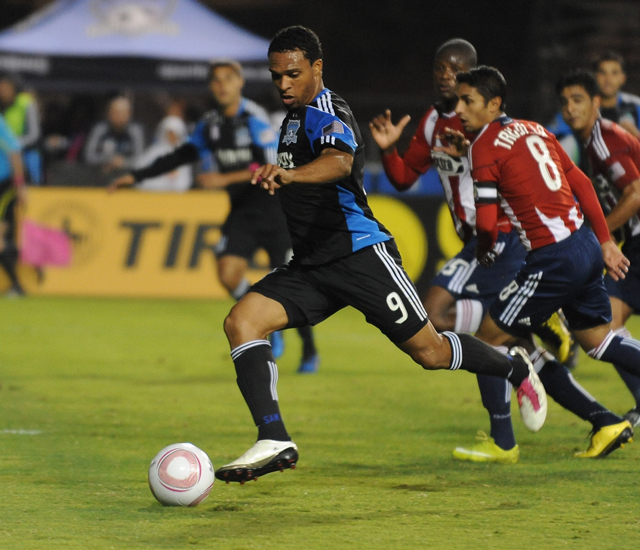 Will the San Jose Earthquakes welcome forward Scott Sealy back to the starting line-up this weekend against Chivas USA? Photo: Joe Nuxoll, centerlinesoccer.com.

The San Jose Earthquakes completed a determined week of training at the Nutrilite Training Facility on Friday with the usual complement of skills and fitness exercises seen during a day-before-the-game session. Some short-sided scrimmaging and lots of crossing and finishing drills were the order of the day, with a full slate of Quakes forward hopefuls putting in their last bids to be included in the match-day 18 against Chivas USA for Saturday’s 1 p.m. afternoon start. Final instructions to the starting XI projected to be run out by head coach Frank Yallop were also given as well as some coaching on positioning during set pieces. In all, the day was filled with activity intended to reinforce the hard work of the previous day’s training.

The orange team controlled possession through much of the scrimmage, but the best goal of the morning came from Ryan Johnson on a perfect through pass from Anthony Ampaipitakwong. Steven Lenhart also had some good opportunities, but he cleary needs to bring his fitness level up before he can be considered for significant playing time in regular season competition. Coach Yallop suggested after practice that the physical forward was a probable pick to get some minutes against Chivas USA this weekend, and would definitely be available for the Reserve League game later that same afternoon.

Whenever a set piece situation came up, coaches would take to the field to go over positioning and strategy for both the offense and the defense. Corner kicks were a big part of the instructional breaks, given the Earthquakes scarcity of goals in those situations so for this season on the offensive end. Defensively, the work was more about marking players and working together to follow off-the-ball runs to eliminate openings between defenders the like of which New York exploited last Saturday at Red Bull Arena. Tighter marking on the wings plus shifting of defenders in the area accomplished that goal when play was restart.

As is often the case with coach Yallop and his starting XI selections each week, a major consideration comes from whether the team is playing well or poor in recent weeks. Given the 3-0 dismantling at the hands of the Red Bulls last weekend, and the subsequent team meeting on Tuesday morning, some positional and player changes appear to be in store for the Chivas USA game. First off, the competition looks wide open for the target forward spot in Yallop’s 4-1-4-1 formation. With Wondolowski likely to drop back into the midfield, one of Johnson, Scott Sealy, and Steven Lenhart should start on Saturday. Sealy, fully recovered from a shoulder injury suffered late in the Earthquakes home draw with Seattle looks to have the inside track on the start, but Johnson looked strong in the Thursday scrimmage and my yet hold his starting position. First-year Quakes Matt Luzunaris and Ellis McLoughlin are considered outside possibilities at this stage, but may still make the match-day 18 in an attempt by Yallop to have a full stable of attacking options to choose from as substitutes against Chivas.

Some shuffling in the midfield line is also expected for Saturday, with versatile midfielders Bobby Convey, Khari Stephenson, Simon Dawkins, and Wondolowski the favored four to fan out across the Buck Shaw Stadium field. Whether Wondo or Stephenson station themselves wide right or centrally for the opening whistle will matter little as the flow of the game will dictate their positioning both in attack and in defense. Coach Yallop stated after training that he preferred lining up Wondo centrally and that Stephenson was experienced enough to handle being on the wing, so don’t be surprised to see that formation when the game kicks off.

Defensively, it appears that the Jason Hernandez as a right back experiment may have ended. After two games where the Quakes looked more vulnerable than ever on the right, coach Yallop will likely bring back Chris Leitch to the starting line-up and move Hernandez back into his central defensive partnership with Brandon McDonald. Leitch did have his issues with the speedy wing play of Steve Zakuani and the Seattle Sounders in week #3 of the season, but the veteran back still benefits from the experience of playing on the right much more than Hernandez, plus is a more effective player pushing up into the attacking third. If Stephenson does spend a majority of time manning the right midfield role, an experience right back in Leitch will be invaluable in keeping the back line organized in defense.

Where does this leave Ike Opara if coach Yallop makes these potential changes to the starting line-up? Unfortunately for the second-year player, he’ll be back on the bench as the first-choice defender in substitution scenarios. While his aerial abilities will be missed on set pieces both offensively and defensively, the luxury of bringing in the Quakes most athletically gifted player as a late game replacement could prove to be the difference in a tight game. Opara proved his value to the team in his two starts this season, but at the log-jam that is the center defender position, he is still the odd man out to the duo of Hernandez and McDonald.

The shift in the defensive formation back to the same line-up that started the season is not surprising given the results of the last two Earthquakes games. What will be more interesting to see on Saturday is whether the potential changes at forward provide more attacking bite to a team that has managed to score only three goals in three home games this season. Coach Yallop professed multiple times this week in post-training interviews his desire to see the team get off to a fast start against Chivas, including getting the game’s first goal — something the Quakes have not yet done at Buck Shaw in 2011. With a corps of forwards assembled to do just that, they now have the responsibility to deliver the goods against a Rojiblancos team that has yet to post a win this season. A strong sense of urgency pervades the Earthquakes players going into the weekend as they look to put the result against New York behind them. Earning their first home victory of the season is clearly the expectation.