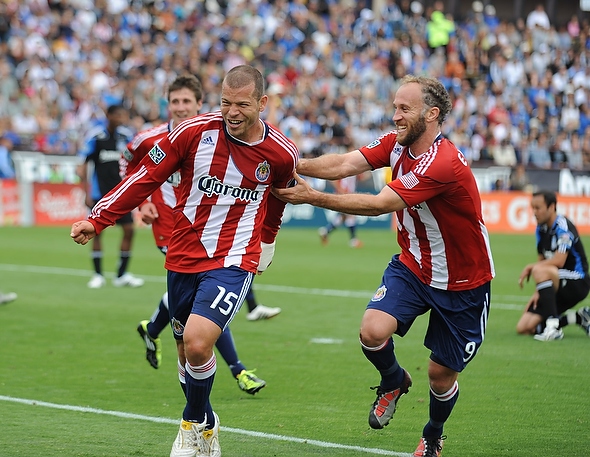 Center Line Soccer's complete match coverage includes a photo gallery and the Aftershocks podcast, which features post-game analysis as well as interviews with players and coaches from both teams.

(Santa Clara) The San Jose Earthquakes early season struggles continued Saturday afternoon at Buck Shaw Stadium as they failed to hold on to an early lead, disappointing a sellout crowd by dropping a 2-1 decision to Chivas USA. The Earthquakes are now winless in four home matches this year (two ties, two losses). For the Goats, it was the first win of their 2011 campaign after an 0-2-3 start.

Where the story line of past games has been “San Jose created many chances but just couldn’t finish,” this time the initiative and most of the scoring opportunities came from the men in red and white. San Jose took the lead in the 16th minute through Chris Wondolowski’s third goal of the season, but a lucky bounce just before half-time and a late Mariano Trujillo goal gave Chivas USA all three points.

“I was not happy at all. From the opening whistle, I didn’t see any real commitment or fight from anybody,” San Jose coach Frank Yallop said. “There was nothing all day. That’s alarming. I need to shake it up now. That ain’t good enough. Not even close.”

After being spanked 3-0 in New Jersey last weekend, San Jose made a few refinements to Saturday’s starting line-up. Ryan Johnson watched from the bench as Scott Sealy stepped in as the lone striker in Frank Yallop’s 4-1-4-1 formation. In midfield, Bobby Convey returned to his favored spot on the left, while Khari Stephenson and Chris Wondowloski switched places; Wondo moving inside while Khari went wide right. Chris Leitch was in the starting 11 at right back, as Jason Hernandez moved to the middle of the defense alongside Brandon McDonald, forcing Ike Opara to the sidelnes.

The Goats, who made news this week by passing on US international midfielder Benny Feilhaber, came into the game determined to break their scoreless streak of 268 minutes. They outshot the Earthquakes 9-2 in the first half, and out worked them throughout the game.

“You’ve got to fight,” Yallop said. “This league’s about fighting hard, and making sure that the opposition doesn’t get to play, but we allowed them to play whenever they wanted to. They should have scored more goals, it should have been more than 2-1.”

Chivas USA started out strong. 14 minutes into the game, a Jorge Flores cross from the left wing found Ben Zemanski wide open 12 yards from goal. Zemanski headed it down on target, but his shot deflected first off Ramiro Corales, then off the right post.

A minute later, San Jose took the lead. A corner kick fell to Ramiro Corrales wide of the right post, and his cross back across the face of goal reached Khari Stephenson for a header from 12 yards out. Stephenson nodded the ball towards the left post, where Chris Wondolowski was able to head it home from a tight angle, a gentle shot landing just inside the right upright.

After taking the lead, San Jose struggled to find a way forward as Chivas USA pressed for the equalizer. Earthquakes goalkeeper Jon Busch was called upon to hold the lead at the half hour mark. Alejandro Moreno had room to work with on the right wing, and drilled a low cross that Nick LaBrocca headed on target from 10 yards out. Busch made a quick reflex save to punch the shot wide of the near post.

In the 39th minute, a Flores blast from 30 yards deflected off the back of Sam Cronin and fell to Moreno near the penalty spot for a snap header, forcing Jon Busch to dive to his left to push it away.

The Goats finally got on the scoreboard in first half stoppage time, thanks to a bit of luck. Heath Pearce curled a 35 yard free kick into penalty area, and if Alejandro Moreno got on the end of it, it was only the very slightest touch as the ball bounced just inside the left post. Either way, Moreno got the credit and Chivas USA went into intermission with a 1-1 tie.

“I went nuts at halftime, because one thing I will ask for is fight, and endeavor, and scrap, and there was nothing,” Yallop said. “Hunger is everything in this game. If you have no hunger for the game, you should be out of the game.”

Chivas USA kept up the attack after the break. Two minutes into the second half Zemanski fed LaBrocca at the top of the penalty area, who in turn slipped a pass through to Moreno on the right side. Moreno pulled it back to his left foot for a shot that missed high.

Bobby Convey responded for the Earthquakes in the 49th minute with a shot from just inside the left corner of the penalty area. It was San Jose’s first shot in over half an hour, but was struck right at goalkeeper Dan Kennedy.

San Jose kept coming. A Chris Leitch cross from the right side a couple minutes later looked dangerous, but Zarek Valentin yanked down Scott Sealy in front of goal - no penalty was given - and Leitch’s pass went untouched through the box. A Chris Wondolowski free kick in the 54th was well struck, but was an easy save for Dan Kennedy.

Anthony Ampaipitakwong replaced Khari Stephenson in the 55th minute, giving the ‘Quakes some new energy on right side, but the Goats soon regained the momentum.
Chivas USA had a golden opportunity in the 58th minute when LaBrocca launched a cross from the right wing to Marcos Mondiani charging the net from the inside left channel. 1-on-1 with the ‘keeper, Mondiani let fly from 15 yards, but Jon Busch came up with a big kick save.

Four minutes later it was Moreno feeding Simon Elliott inside the arc for a left footed effort that sailed high.

Both teams made changes near the hour mark. Justin Braun and Mariano Trujillo came in for Chivas USA, while San Jose sent Ryan Johnson in for Scott Sealy, and gave Steven Lenhart his Earthquakes debut as he replaced Simon Dawkins.

The two Chivas USA subs combined for the game winner in the 85th minute. Braun raced down the right side, beating two defenders and launching a shot to the far post from 15 yards. Jon Busch got a hand on it, but the rebound fell to Trujillo for the tap in.

San Jose’s best chance to salvage a tie came in the 87th minute off a Bobby Convey corner kick, but Ryan Johnson’s header missed wide right. In stoppage time, a long diagonal ball from Convey reached Steve Lenhart, but his header was also wide of the mark.

“I think we weren’t together today as a unit. I thought Chivas were way better than us. They deserved to win the game,” Yallop said. “That was a really, really poor performance by us. Collectively, and individually I thought it was terrible.”

San Jose now travels to Philadelphia to face the Union next Saturday.