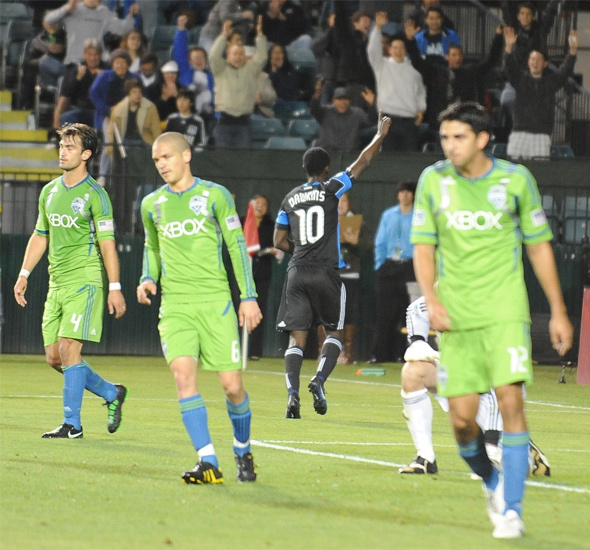 Center Line Soccer's complete coverage includes a photo gallery as well as our new post-game podcast, Aftershocks, which features analysis from Robert Jonas and Jay Hipps along with interviews with players and coaches from both teams.

(Santa Clara) The San Jose Earthquakes battled back twice Saturday night, earning a well deserved point from a 2-2 tie with the Seattle Sounders. Khari Stephenson brought San Jose back from their second deficit of the match with a 30-yard blast, an early candidate for goal of the year.

“A terrific strike by Khari,” San Jose coach Frank Yallop said. “It was an exciting game. I felt a little unlucky we didn’t get the win.”

Seattle had scored just once in their first three matches, and with their explosive forward Fredy Montero sidelined (due to surgery on his right wrist), the packed house at Buck Shaw Stadium might have expected a low scoring affair. Instead, they were treated to end to end action as the teams traded goals throughout the match.

The Earthquakes started with the same 11 that beat Dallas last weekend, a 4-1-4-1 formation that had Simon Dawkins starting in Stephenson’s midfield slot. Stephenson had missed last weekend’s game due to Jamaica national team duty, but both he and Dawkins would figure prominently in the outcome Saturday.

Seattle opened the scoring in the 17th minute. Erik Friberg fed Mauro Rosales inside the penalty area, and Rosales took it to the right end line before rolling a pass across the face of goal. Brad Evans beat Chris Leitch to the ball and banged it in from point blank range.

Simon Dawkins evened the score at 1-1 with his first MLS goal. Just past the half hour mark a nice interchange in midfield led to Bobby Convey slipping a pass through to Dawkins, who was racing into the penalty area. From the left side, Dawkins turned and hit it first time, beating Keller low to the far post.

“A great run and great finish by Simon,” Yallop said. “Somebody other than Wondo scored, thank God for that.”

Chris Wondolowski had scored the previous 12 San Jose goals in regular season play, setting an MLS record in the process.

Seattle was back on top ten minutes later. Steve Zakuani, dribbling in from the left wing, lifted a pass to O’Brian White just inside the six yard box. Earthquakes’ goalkeeper Jon Busch had no chance as White beat Jason Hernandez and buried the header.

San Jose almost found the equalizer in first half stoppage time. Chris Leitch, after a nice touch to get around a defender, slid a pass to Joey Gjertsen inside the penalty area. Open from 10 yards our, Gjertsen didn’t get enough on his first time shot to beat Keller, and the Quakes went into intermission still down a goal.

Both teams made a line up change to start the second half. Seattle had Avaro Ferandez replace Erik Friberg, while San Jose brought Khari Stephenson in for Gjertsen.

The Earthquakes’ move paid off quickly. In the 52nd minute, Stephenson let one fly from 30 yards, a rocket that Keller could only get a finger to as it hit the right top corner of the net to even the score at 2-2.

Both teams had their chances to take all three points, but couldn’t hit the target in the games closing minutes. Ike Opara, a 69th minute substitute for Chris Leitch, had a role in opportunities for both teams.