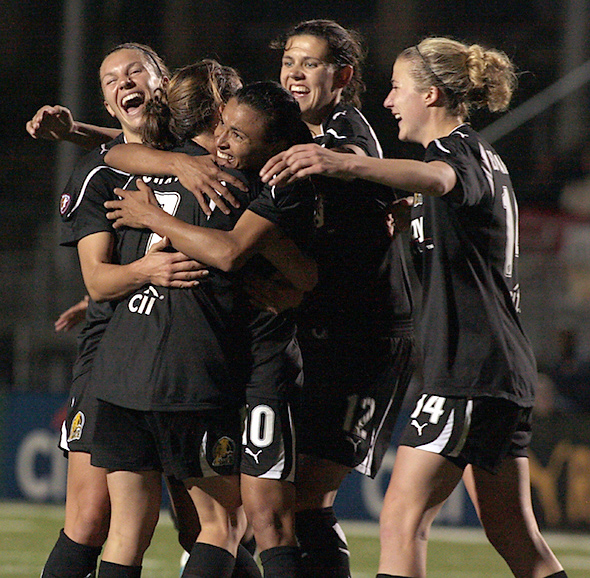 Despite the fact that there is more talk about the league when it is in its off season, the third year of Women’s Professional Soccer promises to be a very competitive, exciting year.

Exactly what has gone on in the six-plus months since FC Gold Pride took the 2010 WPS Championship in September? Well, for starters, FC Gold Pride is no more. Call it poor financial planning, being the lone West Coast team, or the curse of Marta or Shannon Boxx — every WPS side they've played for has folded — the most talented team in the league is now gone.

In addition to Gold Pride bowing out, the Chicago Red Stars announced they would be suspending operations for 2011, in hopes to return in 2012 (if there’s even a league at that point). Chicago, while in its suspended state, lost all its players, but kept its name while moving to the lesser WPSL.

In more team-related news, the Washington Freedom managed to avoid folding when they got new investors. In turn, the team will no longer be in Washington, relocating to Florida under the name magicJack. WPS did add a team in the off season, getting Western New York Flash to join the league as an expansion club. (Come 2012, should the league continue on, the plan is to add two more teams, including a club from Southern California and perhaps Vancouver.)

Also out is a WPS headquarters. Stationed in San Francisco for the first two seasons, the league underwent severe cuts from its staff, ultimately making the headquarters one of a virtual capacity. Tonya Antonucci, the woman who spearheaded the league’s existence, stepped down from her commissioner role and passed it along to Anne-Marie Eileraas, now under the title of chief executive officer.

With all the off-the-field league turmoil, there is a tendency to forget that there are still players who are playing games. (Speaking of which, the league has eliminated the role of “Development Player” deeming all 24-man rosters as full timers.) In 2011, FC Gold Pride was the clear cut best team in the league. They were so dominant, they won the championship over Philadelphia, 4-0.

Now that they are gone, all the players were available for teams to pick up. With one less team – WPS now has six clubs, all on the East Coast: Boston Breakers, Philadelphia Independence, Sky Blue FC, WNY Flash, Atlanta Beat and magicJack – the depth of each team is steeper than it has been in years.

If you are an FC Gold Pride fan, and you miss watching your team play, one team you can view in 2011 and get that Pride feeling is the Flash. They won’t appear to be an expansion team when they take the pitch. WNY managed to add the dynamic striker duo of Marta and Christine Sinclair, who combined for 28 goals. Joining the forward tandem is 2010 WPS Rookie of the Year Ali Riley, dual-threat defender Kandace Wilson, backup keeper Brittany Cameron, Canadian national defender Candace Chapman and solid 2010 rookie midfielder and regular Pride starter Becky Edwards.

By far, the Flash picked up the most former Pride players. However, Boston solidified an already solid defensive unit by nabbing former Pride captain and US national Rachel Buehler. Joining Buehler on the Breakers (who picked up former Pride midfielder Leslie Osborne and Pride intern Jordan Angeli a year ago) is 2010 rookie all star Kelley O’Hara.

Philadelphia loaded its team in the off season. After making the championship in its inaugural season, 2010 WPS Coach of the Year Paul Riley added former Beat (and Pride) Leigh Ann Robinson, Sky Blue FC forward Tasha Kai, Chicago Red Stars’ Megan Rapinoe and Veronica Boquete, as well as Laura del Rio from Spain and Sinead Farrelly in the draft. But even with all those high-quality players, they were all topped when Riley coerced former Pride and current US national goalkeeper Nicole Barnhart – who allowed a league best .077 goals against in 2010 – to join.

Carrie Dew also signed onto a WPS team, joining inaugural WPS champion Sky Blue FC, and Boxx, as mentioned earlier, will join Abby Wambach and magicJack. Each team’s depth will be key to a run at the championship – which will be on Aug. 27, a month earlier than in 2010 – because of the midseason break for the 2011 FIFA Women’s World Cup in Germany. Although  WPS will take a two-week break, many WPS stars are expected to remain gone as their countries make deep runs – Brazil, United States, England, etc.

Undoubtedly, the intrigue of the 2011 WPS season will be high. Year three of WPS begins this Saturday when the Breakers head to Kennesaw, Ga., to take on the Atlanta Beat. WNY starts its inaugural year, with all those ex-Pride players, on April 17 at Boston.