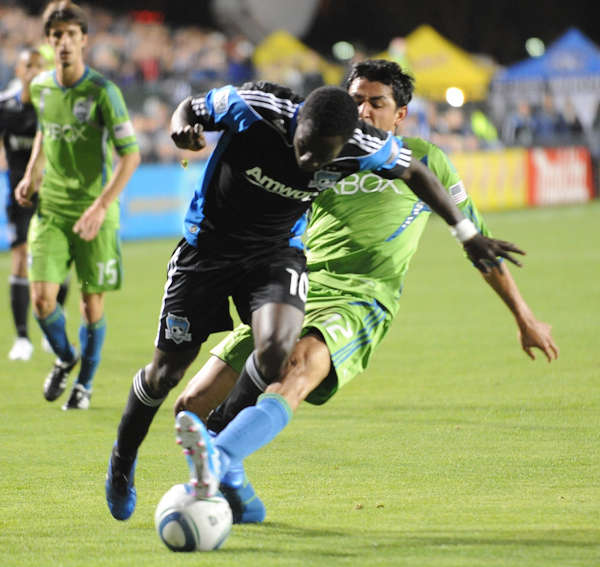 While Head Coach Frank Yallop has not tipped his hand on what starting XI he will feature tonight — kickoff at 7:30 p.m. at Buck Shaw Stadium — watching the team’s training sessions this week has revealed many clues as to the changes he has in plan to face Toronto FC. For a preview of the expected line-up, it also helps to remember what we saw against Seattle in the second half last weekend.

Coach Yallop indicated his displeasure at the sub-par defensive efforts against the Sounders when he spoke to the media on Tuesday after training. At that time, he specifically named Ike Opara as a strong possibility to make his first starting appearance of 2011. By the end of the week, Opara was firmly entrenched in the first team at training in the role of center back. The apparent shake-up in the back four saw Jason Hernandez move out to the right wing, with Chris Leitch taking a seat on the bench.

The other big change in store this week appears to be in the midfield — and again was predicted by the actions last Saturday in the 2-2 draw with Seattle. At halftime of that match, Khari Stephenson spelled Joey Gjertsen in the line-up, taking station in the middle while Chris Wondolowski shifted more to the wing. In training this week, Coach Yallop repeated that formation, with the slight wrinkle that Wondo and lone striker Ryan Johnson often switched positions during the run of play. Given that Johnson looked good at the end of last season as a left winger and the preference of the team to play more fluidly up top, expect Wondo, Johnson, and even to a smaller degree Bobby Convey to feature at forward at different times during the match against Toronto.

With the expected changes in the starting XI, the following formation should be on display tonight at the Buck: