Share All sharing options for: A closer look at the San Jose Earthquakes roster and player salary information 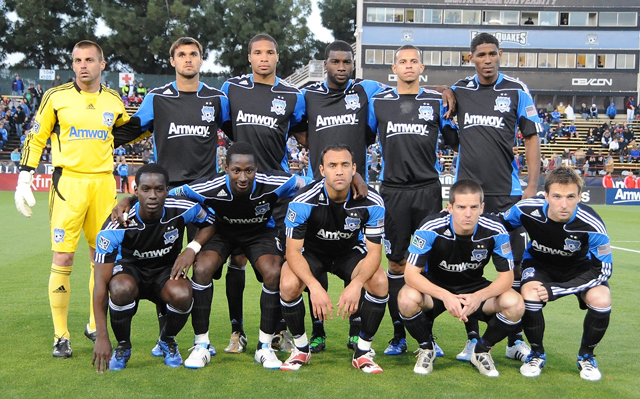 As reliable as the swallows returning to Mission San Juan Capistrano each spring, the Major League Soccer Players Association (MLSPA) releases a comprehensive list of every MLS player’s season compensation. While the league itself does not disclose the specifics of player contracts, the MLSPA has made the salary numbers public in an attempt to shed more light on the financial status of their membership.

Leading the way in total guaranteed compensation for 2011 is to no one surprise the two teams at the top of their respective conferences in the MLS standings — the New York Red Bulls and the Los Angeles Galaxy. Meanwhile, the San Jose Earthquakes sit at 16th on the list of 18 teams, with only Chivas USA and the expansion Portland Timbers FC spending less on player salaries.

Fair warning before there is any dissection of the compensation numbers — these figures are presented by the MLSPA and are not confirmed by the league. Their accuracy cannot be assured, especially given that the players association may have an agenda in mind in releasing these numbers to the public. Actual salary budgets by the individual teams in MLS may be significantly different than what is suggested by the MLSPA. Having said that, analyzing the numbers and understanding their implications to the MLS salary cap is instructive is seeing how the team rosters are assembled.

But first, some ground rules need to be discussed in order to appreciate the number juggling that goes on in the heads of technical directors league wide. With much fanfare, MLS expanded the rosters of each team in the league to a maximum of 30 players. Of those 30 players, only the top 20 — known as Salary Budget Players — have their guaranteed compensation counted against the league mandated hard salary cap of $2,675,000 for the 2011 season. The maximum salary charge for any individual player against the cap is $335,000, with any excess being the responsibility of the team — these are the so-called “Designated Players” on the roster. DPs and a subset of other eligible players on the roster can have their budget charge “bought down” through the use of allocation money.

The remaining 10 slots on a team roster are populated by Off-Budget players and those that are Geneation adidas players — their collective guaranteed compensation does not count against the salary cap. Known in prior seasons as “reserve players” or “developmental players,” roster slots 21-30 are populated with younger players that are often earning the league minimum of $32,600. Within these lower paid roster slots are players that are signed through their team’s youth academies — the so-called Home Grown Players. By not requiring their compensation to count against the total team budget, the league hopes to encourage player development by rewarding the team’s with salary cap exempt signings.

Looking at the numbers for the San Jose Earthquakes, their total guaranteed salary figure for the 2011 season as released by the MLSPA is $2,710,774 (all numbers in this article have been rounded to the nearest dollar.) The following chart lists each of the 27 players currently on the Earthquakes roster along with their guaranteed compensation for 2011: 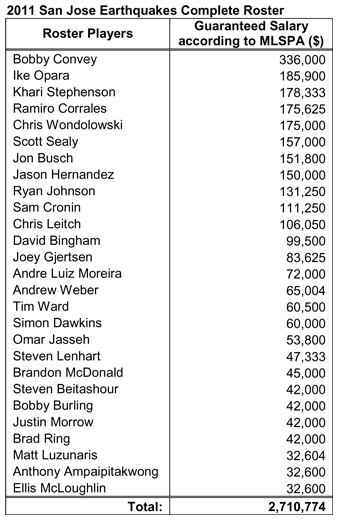 The next chart breaks out the 18 players on the Earthquakes roster who have their salary numbers count against the hard salary cap of $2,675,000. In the case of Bobby Convey, his total compensation number exceeds the maximum budget charge of $335,000 so his number is adjusted accordingly: 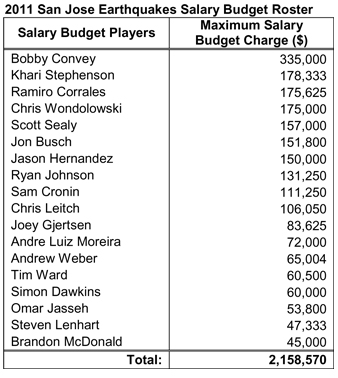 While this chart does not take into account any additional cap savings the Earthquakes have been able to accomplish through the use of allocation money, the total guaranteed salary figure of $2,158,570 is already $516,430 less than the maximum allowed. If this number is indeed factual — remember that the league has not confirmed any salary information released by the MLSPA — there remains significant cap room and two roster slots available for additional signings this summer.

For the sake of completeness, the next chart lists the Off-Budget players on the Earthquakes roster, including three new signings that all make the league minimum salary. Ike Opara and David Bingham also make this list courtesy of their status as Generation adidas players: 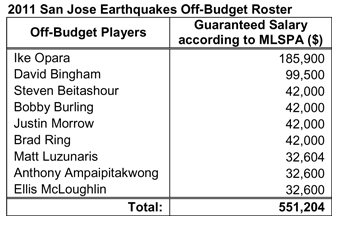 So what does this all mean? Simply, a peak at the salary figures for the San Jose Earthquakes provides a glimpse into how general manager John Doyle and head coach Frank Yallop have built their roster at a budget charge that it one of the lowest 3 in MLS. Dissecting the roster with respect to salary and populating a starting line-up based on these numbers also yields some interesting results. Starting with the most expensive players on the roster, a representative 4-4-2 formation starting eleven line-up can be formed: 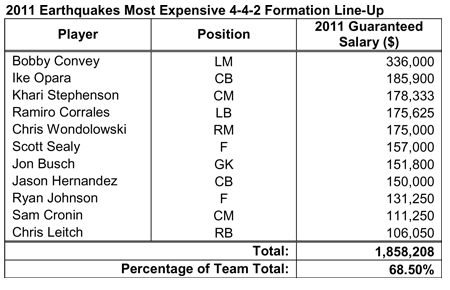 What is most interesting about this line-up is that it contains many familiar faces in coach Yallop’s regular starting XI, while still being constituted entirely of the top eleven earners on the Earthquakes roster. In planning the budget for 2011, Doyle and Yallop developed a choice top eleven that does not feature any wasted salary on players that are in competition for the same position.

For comparison, the next chart looks at a possible starting XI playing a 4-4-2 that is made up of the least expensive players on the roster: 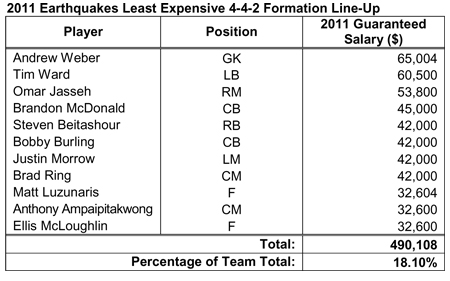 Given that the Earthquakes have had some significant movement in and out of the matchday 18 each week, many of those eleven players on the Least Expensive line-up have already had an impact on the team. In the case of defender Brandon McDonald, his value to the team in terms of his salary is the most significant according to this analysis.

Coach Yallop has consistently fielded his higher paid players in his starting XI line-ups with one glaring exemption — the away loss to the Philadelphia Union. That match came after three straight mediocre performances by the Earthquakes and directly on the heels of the Chivas USA home loss that Yallop was at a loss of words to explain. Fielding a line-up littered with Off-Budget players against the Union, Yallop served notice that no matter where you stood on the team’s salary scale, you were not guaranteed a place in the starting XI come the weekend.

While the 2011 season has not gotten off to the best of starts for the Earthquakes, there are still plenty of games to go in order to climb the Western Conference standings and earn a postseason berth. Perhaps with the roster at his disposal, Yallop will be able to reach the playoffs for the second straight season. Furthermore, with roster slots and salary cap space apparently remaining in the 2011 budget, Doyle could conceivably bring in some DP level signings this summer to bolster the player ranks. Unlike some teams that according to the MLSPA are at or over their salary cap number, the Earthquakes look to be in good shape to further develop their roster over the remainder of 2011.