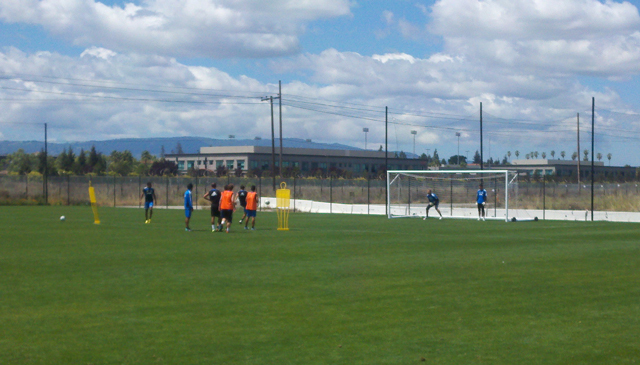 (San Jose, CA) When the morning clouds broke above the Nutrilite Training Facility earlier today, the mood around the team was as sunny as the skies above. Coming off two straight performances marked by a substantially improved defensive effort, the Quakes trained with a growing confidence that their rough April results were behind them. With stern tests away to Vancouver on Wednesday and at home against Columbus on Saturday, head coach Frank Yallop put his charges through their paces in a full-field 11 v. 11 scrimmage as he worked to find the right combination of players to feature this week.

“I want to make sure we are fresh and ready and have a good balance in each team we put out this week,” said Yallop. “We’ve got to be ready for both games. I told the boys this morning that the chances are if you are not playing in one of them, you’ll be playing in the other one.”

The two sides in the training scrimmage were evenly matched, with neither the “blue” team nor the “orange” team able to break through offensively. Midfielder Sam Cronin, who started in last week’s U.S. Open Cup qualifier victory at Portland and looks to be in line to start Wednesday in Vancouver, spoke after training about how important it has been for the club to solidify its defensive standing and be able to better build possession through the back.

“In the New York and Chivas game, the defensive effort was lacking for the full 90 minutes,” assessed Cronin. “We bounced back well against Philly and Portland, and now feel we can build on that this week. We’ve had a good couple of days of training and look at that game in Vancouver as a chance to get another win.”

Coach Yallop stressed that he wants to see a more complete defensive effort from whichever starting XI he puts on the field. These training scrimmages are also very important to him and the rest of the coaching staff to see which players are getting the message. With two games this week, recent practices have also been used to evaluate different combinations and pairings of players in the different lines in the 4-4-2 formation Yallop is likely to feature. He related that it is not enough to just put the best eleven guys on the pitch and expect success; rather it includes finding those players that give better match-ups against the individual opponents.

“I we’ve never done well with the back to back games in one week,” admitted Yallop. “I want us to be fresh for both games. Some guys will play in both games, but we’ll need to see what happens in Vancouver and make a decision for Saturday from there.”

From past examples, Yallop does not show a propensity to change his starting XI while they are in the midst of winning. However, as much as the victory in Portland is a good confidence booster, needing a last minute extra-time goal to beat a Timbers reserve side does not suddenly propel the Earthquakes back into the conversation of MLS postseason candidates. Playing two opponents in four days in league matches will be a better barometer as to how much the team has advanced past those difficult matches against New York and Chivas USA.

As stated above, the 11 v. 11 scrimmage was bereft of goals, but not for a lack of trying. Featured forward pairing Chris Wondolowski and Steven Lenhart looked dangerous playing for the “blue” team, both generating some tough shots on goal that goalkeeper David Bingham had to contend with. The central midfield duo of Sam Cronin and Brad Ring also complemented each other very well, with Cronin drifted back more often to shepherd the ball from the defensive back four to the forwards and wingers. Ring was more likely to drift forward and was effective in backing up Wondo and Lenhart when possession was cleared away from the opposing defense.

Team “orange” lined up with a midfield foursome of Bobby Convey, Khari Stephenson, Anthony Ampaipitakong, and Joey Gjertsen. Ampai and Stephenson played more offensively, seemingly as a result of their opposite pair working hard to protect the defense, and were able to possess the ball cleanly in the center of the field. Forwards Matt Luzunaris and Ellis McLoughlin played side-by-side up top, flirting with being offside on many occasions, but looking to break through the back four whenever possible. Fortunately for Jon Busch, McLoughlin was prevented from unleashing any shots from his lethal right foot.

The return of Joey Gjertsen to full training was a pleasant sign for the Earthquakes, as the starting right midfielder from the first couple games of the season looks to be very close to being ready for MLS action again. Playing in tandem with defender Chris Leitch, Gjertsen did not display the range of play he did at full health, but he was more than able to run the overlapping and defending style of play favored by Leitch. Gjertsen is not ready to reclaim his starting spot this Wednesday against Vancouver, but remains in the mix to play on Saturday against Columbus.

On the injury front, Tim Ward is still unavailable, and there are no further updates on his condition. As for Tottenham Hotspur loanee Simon Dawkins, he was dressed and present at practice, but he did not participate in any activities. Sporting a 6” bandage on each leg over the surgical incision from his fasciotomies, Dawkins was all smiles and gave a “thumbs up” when asked how he was feeling. Coach Yallop indicated the talented midfielder would be ready to play as early as the end of May.

“It looks like it will be 3-5 weeks until he returns to full training,” said Yallop after training. “Simon was playing very well for us. He looked very dangerous going forward. He made us tick offensively, so we hope he will back with us soon.”

The team will travel to Vancouver tomorrow ahead of its match with the Whitecaps on Wednesday evening at 7:00 p.m. at Empire Field. Artificial turf is employed at the home of the Whitecaps — a surface that no one on the Earthquakes is all that fond of — and the team will hope to gain a similar result as they did on the plastic pitch in Portland. Check back tomorrow and Wednesday for more on the possible starting line-up coach Yallop will feature against Vancouver.