Another week, another broken ankle

Share All sharing options for: Another week, another broken ankle 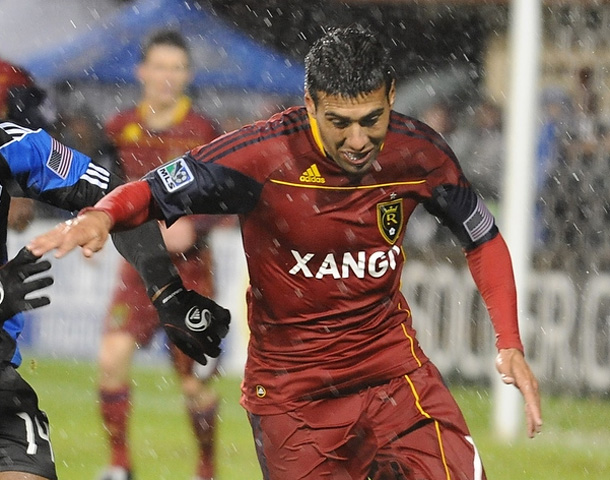 Javier Morales, seen here playing in a downpour in Santa Clara earlier this year, is the latest MLS star to go down to injury thanks to a brutal tackle. Photo: Joe Nuxoll, centerlinesoccer.com

An un-objective and un-comprehensive look at the week that was.

Stop the madness! Last weekend’s action saw yet another MLS Star go down and out with a broken ankle. This time the victim was Salt Lake’s Javier Morales, thanks to a hard tackle from behind by Chivas USA’s Marcos Mondiani. Mondiani at least got a red card on the play (unlike Vancouver’s Jonny Leathers, who received no card for sidelining David Ferreira two weeks before) but that’s obviously not enough to deter this kind of crap reckless play. There’s precious few talented players in MLS to begin with; the Commish better step up and make sure this sort of thing stops. Now.

And don’t feed me that line about how the USSF handles refs and there’s nothing Garber can do. That’s what suspensions and fines are for.

MLS was at its best when the Red Bulls visited LA to play the Galaxy Saturday. There were two talented teams not afraid to attack, a sell out crowd not shy about voicing their opinions, and a nationwide TV audience soaking it all up. The Big Names (Henry, Donovan) scored, and it was strong play by both goalies, not a lack of attack, that kept the score line 1-1. The tie had to hurt the Galaxy; they coulda woulda shoulda won, but Tim Ream came up with the Save of the Year, clearing Landon Donovan’s tap-in off the line just before half time.

Just as the game in LA showed how far MLS has come, the other games Saturday showed how far there the league still has to go. It was a snooze-fest for soccer fans, at least those who chose to tune in to MLS “action.” DC, New England, and Chicago all drew under 12,000 to watch scoreless games.

Columbus drew under 8,000 for their game, but the Crew stretched their unbeaten streak to seven, tying Seattle 1-1 thanks to a second half penalty kick.

Toronto got their first win in over a month, 2-1 over Houston, in another instantly forgettable contest. At least they enjoyed another BMO Field sellout to go with their 3 points.

The Quakes get to face expansion Vancouver Wednesday, and if you’re looking for silver linings in the current doom and gloom, consider that San Jose has only given up one goal (on a poxy PK call) in their last two games. The Whitecaps haven’t won since opening day, and 3 points would lift the Quakes out of the Western Division cellar. Sounds do-able, doesn’t it?