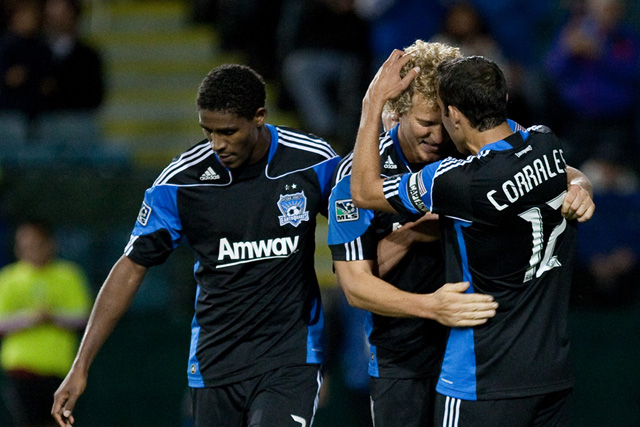 Steven Lenhart once again played the role of San Jose’s Greatest Hero Saturday, scoring a hat trick and adding an assist to power the Earthquakes past DC United, 4-2. Repeating last week’s story line, San Jose scored twice to break a halftime deadlock, with Lenhart and Simon Dawkins hitting the back of the net in the second half to give the Quakes the win.

The victory lifts San Jose’s record to 5-4-4, the first time this season they’ve been above the .500 mark, and stretches their unbeaten streak to six games. They’ve also won both games played while Chris Wondolowski and Ryan Johnson are away on Gold Cup duty with the U.S. and Jamaican national teams, respectively.

"I've been rooting for Steven," said San Jose head coach Frank Yallop. "He’s had chances. He scored in the last home game and then the hat trick tonight. (I’m) very, very happy for Steve. He’s been though a lot this year with his family (his father died unexpectedly earlier this year) and moving from Columbus. He looked really good tonight, for sure."

"There’s a lot that’s been going on in my life," added the San Jose striker. "I think more than anything, it’s just a good release for me to play. I’ve been doing the same things ever since I began playing soccer. Sometimes you get more goals than not. Tonight was just one of those nights. I’m feeling confident and ready to help the team more."

San Jose and DC looked to be as even a match-up as you could ask for. Both teams started the day with five game unbeaten streaks, 16 goals scored, and 4-4-4 records. The result was a wild end-to-end game that didn’t settle down until the final minutes, when San Jose enjoyed a two goal advantage and could concentrate on managing the clock rather than inflicting more damage on the DC goal.

The Quakes 4-4-1-1 line up was the same group that beat Houston last Saturday. For the third straight game, San Jose went with their adjustment on the left side, having Ramiro Corrales play midfield, with Bobby Convey behind him at left back.

The Earthquakes went on the attack from the opening whistle. One minute in, Lenhart ripped a swerving shot from the top of the box, forcing DC goalkeeper Bill Hamid to stretch to tip it over the crossbar. A minute later, Lenhart had a pair of shots from inside penalty area blocked by the defense.

DC also looked eager to push forward, and opened the scoring in the 14th minute when Josh Wolff threaded a pass through three San Jose defenders to Andy Najar, who was racing in from the right wing. Najar had a tight angle at the top of the six, but slipped a shot past San Jose goalkeeper Jon Busch, beating him inside the near post. It was the first goal of the season for the graduate of DC United’s Youth Academy, and a fitting way for DC to celebrate Andy Najar bobblehead night at RFK Stadium.

Lenhart answered for San Jose just a minute later. Khari Stephenson split the DC defense, rolling a through ball to Lenhart who had held his run to beat DC’s off side trap. DC goalkeeper Bill Hamid came out to challenge Lenhart near the top of the penalty area, but the Earthquakes forward dribbled around him and hit the empty net from 15 yards.

Lenhart was just getting started. In the 22nd minute, he teed up Stephenson at the top of the arc for an open shot. When Hamid couldn’t hang on to Stephenson’s blast, Lenhart pounced on the rebound, banging it home from close range to put San Jose on top 2-1.

San Jose almost doubled their lead at the half hour mark. A Ramiro Corrales cross to Lenhart was punched away by Hamid, falling to Stephenson at the top of the penalty area for a volley that barely missed wide left.

DC did not go down without a fight. In the 33rd minute, rookie Blake Brettschneider took pass from Chris Korb at top of the box. With his back to goal, Brettschneider spun to his left around Bobby Burling and hit a left footed shot that beat Busch inside the right post. It was his first career goal, and knotted the match at 2-2.

DC had several chances to take the lead before intermission. In the 39th minute, Josh Wolff, dribbling into the box from left wing corner, got through Steven Beitashour and slammed a shot to the near post that Busch pushed away. A minute later, a Najar shot from 20 yards was hit well, but right at the San Jose keeper. Seconds before half time, Chris Pontius cut in from the left corner and curled a 15 yarder that sailed just inches over the cross bar.

There was no let up to the hectic action as the second half started, but from now on, it was San Jose doing all the scoring. Simon Dawkins came on for Khari Stephenson in the 48th minute, and almost immediately put San Jose ahead. Facing a 2-v-4 situation at the top of the penalty area, Dawkins worked a delicate give and go with Lenhart, and beat Hamid from 8 yards for his second goal in as many games since returning from surgery on both calves.

"It feels great [to score]," said Dawkins. "Any goal you score is great. It was an important one as well to put us 3-2 up, so it really got us going and then the fourth goal we scored really topped the game off."

DC’s best chance for an equalizer came in the 56th minute, when Clyde Simms fed Josh Wolff breaking in to the box from the right side. Wolff slid a cross meant for Brettschneider crashing the net, but the pass slid just beyond the DC rookie’s bid for a possible tap-in goal.

Lenhart then completed his hat trick and the night’s scoring just shy of the hour mark. Sam Cronin played a high ball into the box, and Lenhart beat three DC defenders to the ball. Hamid was late coming off his line, allowing Lenhart to flick a soft header past the onrushing goalkeeper and into the empty net.

DC brought on Charlie Davies, Brandon Barklage, and Dax McCarty in the game’s closing half hour in an attempt to find the fire power to match San Jose’s offensive output, but the Earthquakes began dropping more and more white shirts back into the box, and the majority of the DC shots that looked on target were blocked by the defense before reaching Jon Busch.

With two straight wins, and four wins and two ties in their last six games, San Jose has risen from the Western Division cellar to join the MLS playoff race. The Earthquakes hope to continue this run of positive results next Friday when they travel to Live Strong Sporting Park to face Sporting Kansas City in a match to be televised on Fox Soccer Channel.

Match notes: Lenhart's hat trick was just the fifth in the history of the MLS Earthquakes, after one each by both Landon Donovan and Dwayne De Rosario and a pair last season from Chris Wondolowski.