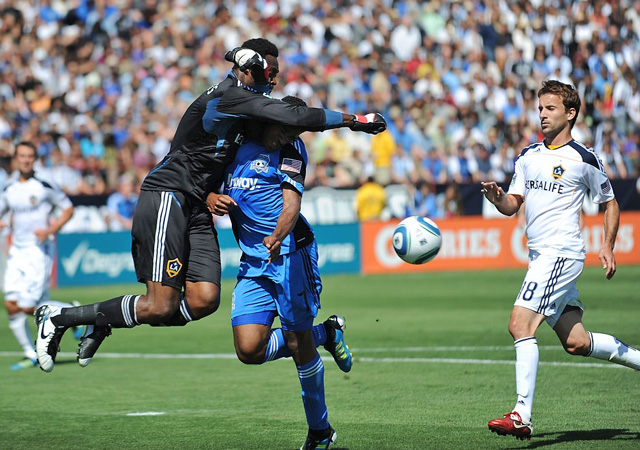 Los Angeles goalkeeper Donovan Ricketts collided with San Jose's Khari Stephenson in the first half, resulting in the Galaxy's first goalkeeper substitution of the night. Stephenson, who complained of memory loss, left the match at the half. Photo: Joe Nuxoll, centerlinesoccer.com.

(Santa Clara) Reduced to 10 men, and with midfielder Mike Magee playing goal for the second half, LA denied San Jose all three points Saturday as the Galaxy and the Earthquakes battled to a scoreless draw.

LA had lost their starting goalkeeper, Donovan Ricketts, to a first half injury, and when back-up Josh Saunders was shown a red card in the 43rd minute the Galaxy turned to Magee, who had never played in goal at any time in his career. San Jose failed to take advantage of the novice ‘keeper, struggling throughout the second half to slice open the LA defense for a clean shot on goal. When the Quakes did create some chances late in the match, Magee was up to the task, stopping Steven Lenhart in the 89th minute to preserve the scoreless tie. Magee was credited with four saves overall to earn his share of the clean sheet.

Even without Landon Donovan (away on US National Team duty) and David Beckham (out due to back spasms) in uniform, a game with the LA Galaxy has a playoff feel, and the sun-splashed sell out crowd was witness to another memorable chapter in the league’s most passionate and long running rivalry. A record crowd of 10,872 squeezed their way into Buck Shaw Stadium, and saw the home side dominating the action from the opening whistle.

Don't forget to check out our photo gallery from the match.
(The Aftershocks podcast will not be published this week due to technical issues.)

San Jose out shot LA 8-1 in the first half. The game was less than a half minute old when Convey fed Dawkins at the top of the penalty area. With his back to goal, Dawkins spun and hit a left footed shot that beat LA goalkeeper Donovan Ricketts cleanly, only to be denied by the right upright.

Four minutes in, Lenhart did a good job getting past two defenders and breaking into the penalty are down the right side. He centered the ball for Dawkins, who was denied by Ricketts at point blank range. The rebound fell to Bobby Burling, who also couldn’t beat the LA goalkeeper.

“The first half was the best we’ve played since I've been back, since ‘08,” Yallop said. “It was great, it was a joy to watch. We moved the ball great, we were dynamic in all areas, we were robust, and we did all the things I asked them to do. We just couldn’t sustain it, that was the problem.”

By the halftime break, LA was down to 10 men, and had midfielder Mike Magee manning their net. The Galaxy’s goalkeeper troubles started in the 21st minute when Ricketts got into a violent collision with Khari Stephenson as the two players both raced to be first to Johnson’s cross from the left wing. Both Ricketts and Stephenson lay on the turf for a few minutes as the trainers from both teams raced onto the field. The San Jose midfielder was able to continue until intermission, but the LA goalie immediately headed to the bench with a left forearm injury.

“There’s a pain in my neck, with loss of memory — ten minutes — but no head ache, no dizziness,” Stephenson said. “I remember the play. I remember Ryan getting in the ball, and I’m running in the box. I remember going for the ball, and then I don’t remember anything else until 10 minutes after. And my neck was hurting me.”

Josh Saunders came in to replace Ricketts, but was out of the game himself before the half time whistle. In the 43rd minute Steve Lenhart was hassling Saunders as the LA goalkeeper was trying to send the ball up field. Lenhart knocked the ball free momentarily, heading it from Saunders’ grasp, and Saunders retaliated by striking the San Jose forward in the face. Lenhart dropped to the turf as referee Juan Guzman hustled to the scene, giving Saunders a red card and Lenhart a yellow.

As Saunders walked off the field, Lenhart attempted to shake hands with him, but Saunders was having none of it. LA assistant coach Dave Sarachan also had some choice words for Lenhart as the teams went to the locker room at the break.

At halftime, San Jose brought Anthony Ampaipitakwong on for Stephenson, and rotated their attacking players. Ampaipitakwong played at right midfield, moving Bobby Convey to the left. Ryan Johnson shifted to forward, while Simon Dawkins dropped back to Stephenson’s midfield spot.

And all eyes turned to the LA goal, where Mike Magee was back between the posts.

“When I first went in there, I wasn’t nervous at all,” Magee said. “It was like, half funny, half scary. I thought I only had to make it 10 minutes or how much was left (until halftime), then we’d have a great plan at half time where I’d be back on the field. Then I went back out (for the second half) and it hit me that I was going back in goal, and that was pretty nerve wracking. When it kind of hit me that I would have to be in goal. I was not happy, I was kind of scared.”

“I think a betting man would have put the house on us getting a goal,” San Jose’s Jon Busch said, “but credit to Mike, and his defenders, they dug in and didn’t make it easy.”

LA dropped back into a deep 4-4-1, minimizing the exposure of Magee in goal. The Galaxy allowed the Quakes to pass around the edges of their defense, but kept San Jose outside shooting range for most of the second half. Convey testing McGee from long range two minutes after the break, and McGee easily caught the shot.

“When you say 10 men, it’s still eight defensive players, so when the ball is coming towards the box they still have enough players to defend it,” Yallop said. “We couldn’t break them down like wanted to. They bunkered in and did a good job in the box. I’m not faulting the guys for the effort they gave all afternoon. It wasn’t an easy task to get a shot on goal. The box of four that LA had in the middle did a good job of blocking everything and making it difficult. We wanted to spread the play, get some crosses in, but we didn’t get the ball moving as much as we normally do.”

The LA defense made most of the saves in the second half, blocking shots before Magee had the chance to do so. In the 71st minute, a Ramiro Corrales cross from the left wing found Ampaipitakwong at the far post for a header back across the face of goal. In the scramble that ensued, Steve Lenhart had an acrobatic effort from the penalty spot blocked by the Galaxy defense. The rebound fell to Convey at the top of the arc, but his shot also hit a defender before reaching the LA net minder.

In the 89th minute, San Jose has their best chance in the second half when a pass from Ampaipitakwong reached Lenhart inside the six, but Magee was able to come up with a quality kick save to deny San Jose the win.

How confident was he that he could keep the clean sheet? “100%,” Magee said with a laugh. “Not because of me, but because of our defense. Our defense has been amazing. Without our defense, I would have let in six or seven goals. The guys had to play one of the hardest games of the year. It’s a game we can celebrate and kind of laugh. It was one of those games where we needed everybody, even the number three goalkeeper.”

Despite playing without Landon Donovan for the fourth straight game, and missing David Beckham for the second straight match, the LA Galaxy stretched their unbeaten string to 10 games, and their 35 points are four better than any other team in the league.

“I felt disappointed for our guys that our first half performance didn’t give us the win,” Yallop said. “We deserved to be at least one or two goals up at halftime. That was the shame of the game.”

While the tie broke San Jose’s three game home winning streak, the Quakes have only lost once in their last eight games. San Jose now prepares to host the New York Red Bulls in a match to be played at Stanford Stadium on Saturday night.