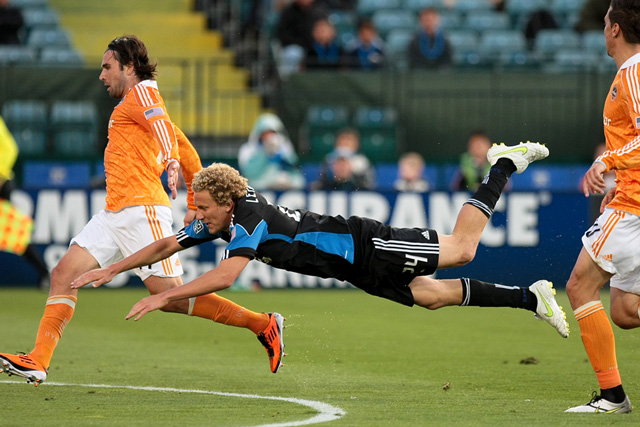 San Jose's Steven Lenhart was unsuccessful on this first-half diving header, but he netted his first goal for the Quakes later in the match to lead San Jose to a 2-0 victory over Houston. Photo: Kelley L. Cox, centerlinesoccer.com, isiphotos.com

(Santa Clara) With Chris Wondolowski away on U.S. men’s national team duty, the question for the Quakes has been, “where will the goals come from?” Saturday night the answer came from Steven Lenhart, with a diving header to put San Jose ahead in the 69th minute, and Simon Dawkins with a break away goal in stoppage time to lift the Earthquakes past Houston, 2-0.

A rainy day and the threat of more storms to come kept most of the announced crowd of 9,270 at home, but those who attended were treated to San Jose’s third straight win at Buck Shaw Stadium. The victory stretches the Quakes unbeaten streak to five games and improves their record for the season to 4-4-4.

“I don’t dwell on (missing Wondolowski), and the team doesn’t.” San Jose coach Frank Yallop said. “We proved it tonight. We didn’t worry about not having our top goal scorer with us, and another player (Ryan Johnson) who’s been playing well for us. We got on with it, and I felt it was a good performance. Good enough to get the three points for the win.”

The Gold Cup call ups took their toll on both rosters. While San Jose was without Wondo and Ryan Johnson, Houston was missing three players: Andrew Hainault, Jermaine Taylor, and Je-Vaughn Watson. In addition, the Quakes Ike Opara was out with an injury, as was the Dynamo’s Brian Ching.

Both teams struggled to find any offensive rhythm in a scoreless first half, slipping and sliding on the soggy turf.

San Jose did not get a shot on target until the half hour mark, and their only threatening moment came when a Ramiro Corrales cross from the left wing reached Anthony Ampaipitakwong at the far post in the 37th minute. Houston’s goalkeeper Tally Hall easily handled Ampai’s weak header from close range.

Houston had a good chance in the game’s opening minutes, but Lovell Palmer’s shot from the top of the arc was hit right at San Jose goalkeeper Jon Busch.

The Dynamo’s second scoring opportunity didn’t come until just before half time. Geoff Cameron worked a give and go with Brad Davis, breaking into the penalty area to get on the end of the return pass. Jon Busch read the play well, sliding out to deny Cameron near the penalty spot.

“The first half was pretty even,” Yallop said. “At the half, we talked about upping our game a little bit, and playing with the belief that we can score. We were a little tentative in the first half. The guys responded really well in the second half.”

San Jose started stringing together passes after intermission, and finally took the lead in the 69th minute. Steven Beitashour, pushing forward from right back, curled a long pass to Lenhart for a diving header from 12 yards out that cleanly beat Hall inside the right post. It was Lenhart’s first goal for San Jose, and the first career assist for Beitashour.

“A good ball from Beta,” Lenhart said. “I’ve been just trying to put in a lot of good work for the team, trying to help the team win. Finally getting a goal meant a lot.”

“A great ball, and an even better finish,” Yallop said. “I’m pleased for him, with all the stuff he’s been through.”

Simon Dawkins made his first appearance since April 23, replacing Ampaipitakwong in the 75th minute, and would later put the finishing touch on the win. But first, San Jose had to hang on to their slim lead.

Houston sent waves of orange shirts forward in the game’s closing quarter hour, firing nine shots during that time. The Dynamo had a great chance for an equalizer in the 84th minute, when a Colin Clark cross from the right wing found Palmer for a snap header from eight yards, but Jon Busch dove to his left to push that shot away.

In the closing seconds of regulation time, Houston had another opportunity when Busch punched away a pass, only to have it fall to Colin Clark near the penalty spot. Clark’s shot was blocked by Lenhart. Brad Davis chased down the rebound on the left wing and sent in a cross to Cam Weaver, but Weaver’s header went right to the San Jose goalkeeper.

Dawkins then closed out the game in stoppage time. Taking a pass from Bobby Convey at the midfield stripe, Dawkins played the ball forward to Sam Cronin, then timed his run to beat Houston’s high line and get on the end of the return pass. One on one against the Houston goalkeeper, Dawkins calmly slid a shot inside the right post, his third goal of the season.

“When people around the league look at or team, it looks like a one man show at times,” Jason Hernandez said. “That’s a credit to Wondo stepping up to the plate week in and week out.  For us to not have him, and Ryan Johnson, another important (player), and go up against a tough Houston team who was really up to the task tonight, and get a result, I think it says a lot about the first guy to the last guy in our line up. It was a great team effort from everyone.”

The Earthquakes next travel to the nation’s capital to face DC United next Saturday.

Match notes: San Jose defender Ike Opara, who injured his left foot in training on Thursday, was on crutches at Buck Shaw for the match. The Earthquakes medical staff confirmed that x-rays showed no fractures and an MRI had indicated no soft-tissue damage, so the current diagnosis is a sprain. It's possible that Opara may undergo additional tests next week, depending on how the foot responds.