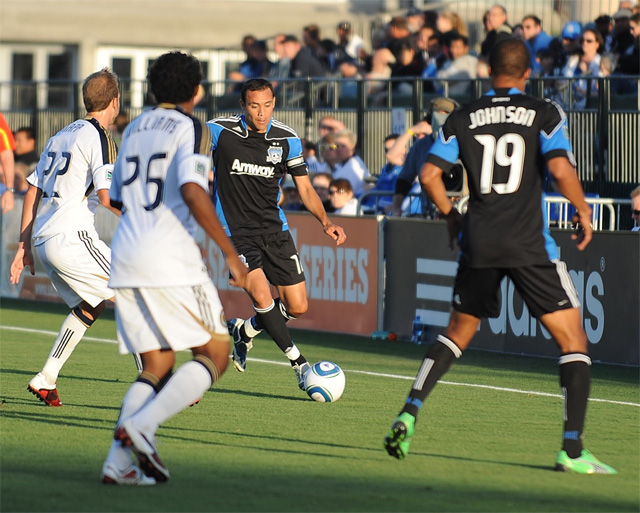 San Jose captain Ramiro Corrales brings the ball into the attack during the first half of the Earthquakes' scoreless tie with Philadelphia. Photo: Joe Nuxoll, centerlinesoccer.com.

(Santa Clara) San Jose’s slump continued Saturday night as the Earthquakes and the Philadelphia Union played to a scoreless draw at Buck Shaw Stadium. With the tie, the Earthquakes’ winless streak now stands at five, and they have been shut out in four of those five games.

“I thought it was a lot better performance than (against) Chivas,” San Jose coach Frank Yallop said. “I thought at times we played okay. We had a clean sheet tonight, which is a plus. Not scoring isn’t good, but Jon Busch played well. I think Bobby Burling and Jason (Hernandez) did well at the back. I think we’re just kind of misfiring right now, not just in front of goal, because we’re not really getting in front of goal that much. But we’ve played well enough to score in the last few games.”

Coming of a lackluster 2-0 loss at Chivas USA, San Jose shuffled their line up a bit, with four new faces in the starting 11. On the defensive line, Bobby Burling returned to center back, moving Chris Leitch to the right. Anthony Ampaipitakwong started at right midfield, with Khari Stephenson returning to the middle. With Steven Lenhart sitting out a one game suspension due to an accumulation of yellow cards, Chris Wondolowski moved up top along side Simon Dawkins.

Philadelphia was without their leading scorer, Carlos Ruiz, but the Union still managed to out shoot the host team 16-7.

Both teams struggled to find a way forward in a quiet first half. Philadelphia’s Danny Mwanga came closest to scoring; his 25 yarder just before the half hour mark was punched away by San Jose goalkeeper Jon Busch. Three minutes later, Mwanga dribbled through a scrum just inside the penalty area, stepping on Busch’s left arm in the process, before firing a fifteen yarder that was cleared away by Bobby Burling.

For complete coverage, be sure to check out our photo gallery and post-game interview and analysis podcast, Aftershocks.

San Jose managed only two shots in the opening period. Their lone shot on target came in the 15th minute when a long diagonal ball from Chris Leitch found Ryan Johnson inside the penalty area. From a tight angle on the left side, Johnson’s 10 yarder was hit right at Philadelphia goal keeper Faryd Mondragon.

That turned out to be San Jose’s only shot on goal all night.

In the second half, the pace of the game picked up slightly, though neither team could find the back of the net. Three minutes into the second half, a Chris Wondolowski pass deflected to Ryan Johnson, who hit it first time from 15 yards, his shot clipping the cross bar as it sailed over the top of goal.

In the 52nd minute, the Union created a good chance when Gabriel Farfan slid a through ball for Mwanga racing into the penalty area. Mwanga’s shot from 15 yards forced Jon Busch to come up with kick save. A minute later, Busch had to turn away Sebastien Le Toux’s volley from close range.

Just past the hour mark, San Jose picked up a couple of yellow cards in the span of two minutes, and when an angry Frank Yallop punctuated his disagreement by banging on the sign boards in front of the San Jose bench, referee Elias Bazakos kicked him out of the game.

“I think it was frustration. Not just with the officiating, it was a frustrating night, and sometimes it all comes out in one outburst,” Yallop said. “I’d like to apologize to the referee. I didn’t mean to say what I said. (Now) I have to pay a fine. It doesn’t get paid for me.”

Newly signed Rafael Baca made his MLS debut for San Jose in the 81st minute, coming on for Simon Dawkins, and while the youngster showed some pace down the left flank, he could not spark the San Jose attack.

Philadelphia almost stole the game in the 85th minute, when a Kyle Nakazawa free kick from just outside the penalty area deflected on its way to goal, and pinged off the right post.

With three ties to show from their last five matches, the Earthquakes look forward to breathe some new life into their club when the transfer window opens next Friday.

“We have a few irons in the fire,” Yallop said. “ We can talk about goal scoring, but Lenhart’s got (five), Wondo’s got six, and Simon’s got four, so I think if the team’s playing well we’re fine. If the team’s struggling to create chances, then maybe not. We’re looking for wide players to get some pace and some ability. Maybe an extra defender, because we traded Brandon (McDonald). Bobby and Jason did fine tonight, but they’re one nick away from being a problem area.”

“John (Doyle) and I are meeting on Monday to go over the whole picture of what we have, the salary cap, the players we want to make sure we keep, the players we feel we maybe can move on, all those things,” Yallpo said. “It’s not because of what we’ve done the last two games, but it’s kind of nice to have a fresh attempt to make the team better.”

San Jose plays West Bromwich Albion in an exhibition Tuesday at Buck Shaw Stadium before traveling to Columbus to face the Crew next Saturday.