What a week for the San Jose Earthquakes: EPL victory, player movement, and Crew Preview

Share All sharing options for: What a week for the San Jose Earthquakes: EPL victory, player movement, and Crew Preview 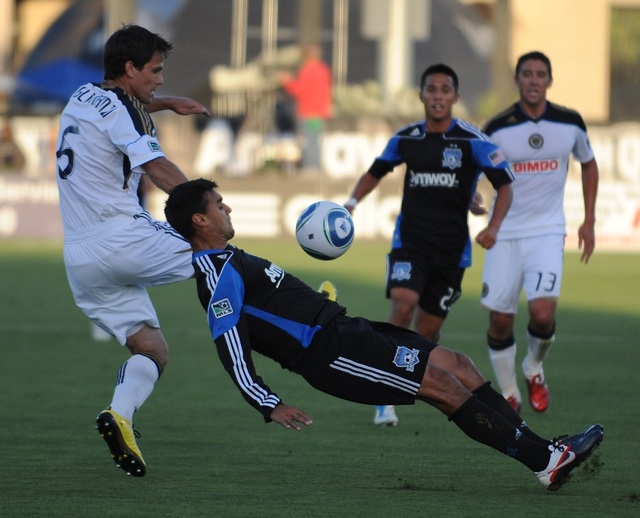 Apparently not only the fans of the San Jose Earthquakes were floored by all the news surrounding the team this week, even Chris Wondolowski didn’t see it all coming. (Photo: Joe Nuxoll, centerlinesoccer.com)

While often a week goes by and the San Jose Earthquakes do little to make the news, this week was one filled with juicy stories and amazing feats. After a rather tepid affair over the weekend that saw the Quakes and the Philadelphia Union settle for a scoreless draw — just one of a record number of MLS matches this season to end without a goal — a sleepy fan base could be excused for turning their attention to other activities. Besides, with the Copa America and FIFA Women’s World Cup garnering attention on the world scene, maybe a break from MLS was in order.

For the Earthquakes a busy week of preparations for their road trip to Columbus, Ohio was interrupted by a curious distraction — a midsummer friendly with Barclays Premier League side West Bromwich Albion. Significantly lacking the pomp and circumstances that surrounded the visit of fellow EPL club Tottenham Hotspur last July, the Baggies came to town for a Tuesday evening affair that was low on interest but high on excitement.

After blowing out their marketing budget on the New York Red Bulls match at Stanford Stadium over the July 4th weekend, the Earthquakes found a new way to bring fireworks to the event — this time in the form of the human cannon David Bingham. Barely into the third minute of the match, as fans were still settling into their bench seats at the Buck, the Quakes third-string goalkeeper scored one of the most improbable goals you will ever witness. For the 6800 or so in attendance, the wonder goal by Bingham will likely be more indelibly written into their memories more than the fact that the Earthquakes beat West Brom 2-1 that evening. For the over one-and-a-half million people around the world that have viewed the video of the goal on YouTube, and the countless others that have seen it replayed on television news reports, “Pretty in Pink” goalkeeper David Bingham is suddenly a familiar name and the proud member of the goal scoring net minder hall of fame.

Maybe not getting as much attention as Bingham, Chris Wondolowski was also a television star on Wednesday, as the Quakes star striker was a nominee on the ESPYs for “Best MLS Player” for 2010. Enjoying the Hollywood attention, Wondo spent the day surrounded by other big sporting stars, before losing out on the award to rival Landon Donovan of the Los Angeles Galaxy. Well, at least the trip to LA was not a complete waste, as Wondo apparently received a gift bag of goodies that almost fails reasonable description. With the diversion of the ESPYs out of the way, Wondolowski hoped aboard a plane for Ohio and joined back up with his teammates ahead of tonight’s match against the Crew.

Not content to let Bingham and Wondo have all the headlines for the week, the Earthquakes front office went about making roster maneuvers ahead of the opening on Friday of the MLS summer transfer window. The object of much fan derision over this season, forward midfielder Ryan Johnson was traded to Toronto FC on Thursday, along with a duffel bag of MLS allocation money and a handy International player roster slot (needed by Johnson to play in Canada), for a trio of Reds that just didn’t fit into the roster remodeling job that TFC head coach Aron Winter was embarking on for the second time this year. Defender Nana Attakora, midfielder Jacob Peterson, and forward Alan Gordon gladly accepted the move to San Jose, with Peterson very vocal about how happy he was to be free of Winter’s “Total Football” experiment. Now, I can see Peterson being immediately deployed at the troublesome right wing position, but not Gordon as a starting target forward — though he has scored one of the prettier goals in MLS so far this season.

Johnson, meanwhile seems happy to get a fresh start in Toronto, after being one of the longest serving Earthquakes on team before being traded. Quakes general manager John Doyle on the other hand, was pleased to get three potential starters for the inconsistent Johnson, and also dropped the news that the summer signing season in San Jose is still in full operational mode. Maybe the FO has another Geovanni signing up their sleeves after all.

At around the same time that San Jose and Toronto were swapping players, the Earthquakes also sent a couple players on loan to lower division clubs. Defender Justin Morrow, who spent the better part of his rookie season on loan to FC Tampa Bay, returns to Florida in search of more playing time. Morrow played the full 90 minutes against West Brom Tuesday evening, hoped on a plane arriving in the Sunshine State on Thursday morning, and featured as a second-half substitute for FC Tampa Bay in a friendly match victory against Bolton Wanderers that same evening. Grabbing two EPL scalps in less than 48 hours — not a bad week for the second year defender.

The other loanee from the Earthquakes was seldom used forward Matt Luzunaris, who also headed to Florida and joined up with Orlando City SC. Luzunaris will also get a crack at beating Bolton and joining his Quakes teammate Morrow in the EPL beatdown category, as well as getting the chance to face Newcastle in another friendly. The Earthquakes forward has become increasingly frustrated with his lack of minutes with San Jose, so the opportunity to get meaningful playing time with Orlando should go a long way in increasing his fitness level and match sharpness. Both Luzunaris and Morrow will stay in Florida through the remainder of their new teams’ seasons, but they can be recalled by the Earthquakes at any time if necessary.

As for the first team, the Earthquakes are in Ohio to face the Columbus Crew later today, with a chance to sweep the Crew in the season series following their 3-0 triumph at Buck Shaw Stadium last May. Steven Lenhart leads the way and will start against his former club after serving a one-game suspension sue to yellow card accumulation. The visit to the Buckeye State is also a homecoming for defender Chris Leitch, who grew up in the central Ohio town of Pickerington, and is expecting a big contingency of family and friends to cheer him on at Crew Stadium. Likely to join Leitch in the starting line-up tonight is Earthquakes newcomer Jacob Peterson, where the two Rick Astley look-a-likes will pair up on the right side of the formation. Currently, residing on the edge of the playoff picture, the Quakes need to find their scoring touch this weekend against the Crew so they can bring home a positive result ahead of another two-match (home to Vancouver and away at Real Salt Lake) MLS week.

And looking forward to Wednesday’s match with the Vancouver Whitecaps FC, a couple items are already worth noting. First off, the bizarre news earlier today that the ‘Caps MLS regular season game with Real Salt Lake has been postponed due to pitch conditions is laughable, right? Don’t they play on a plastic pitch at Empire Field, just like the other MLS Cascadia teams? (By the way, featuring artificial turf is such a nice claim to fame, Pacific Northwest, i.e. “the hotbed of North American soccer.”)

Oh, wait… In preparation for the visit of Manchester City to play Vancouver in the World Football Challenge (Man City faces Club America tonight at AT&T Park in San Francisco), stadium groundskeepers laid out grass over the plastic stuff during the week, and when the inevitable rains came the sod layer couldn’t sufficiently drain the water quick enough. So, instead of having RSL and the Whitecaps tear up their temporary playing surface and have Monday’s nationally televised friendly corrupted by an ugly pitch, Vancouver team officials and MLS postponed the match to a later date. They promised refunds to ticket holders — but I sure hope they also do something to compensate all the Real Salt Lake fans that made the visit to Vancouver.

For the Earthquakes, the postponement of the ‘Caps game today means that Vancouver comes to Buck Shaw Stadium on Wednesday that much more rested. Assuming they play their entire squad against Man City, much like the Quakes did against West Brom, the Whitecaps will be set to go against a San Jose team returning from a tough road trip to Ohio.