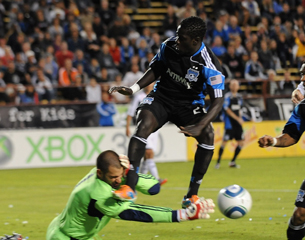 Omar Jasseh, the blue-and-black goalkeeper surfer, was absent at San Jose Earthquakes training Tuesday morning, but that was not the only news going on around the team.

Training time this week will again be limited for the Quakes, as a midweek home game against the Vancouver Whitecaps and a road trip over the weekend to face Real Salt Lake require the coaching staff to moderate the hours they spend on the field. With regeneration exercises more important than actual work on the pitch for the players getting minutes in the matches last week, Tuesday was the only scheduled day the Quakes would have a full training session this week.

Making his training debut for the Earthquakes was new midfielder Jacob Peterson. After arriving in Columbus late last week and starting for the Quakes against the Crew on Saturday night, Peterson finally enjoyed his first full run-around with his new teammates. He looked lively playing the wing during a light scrimmage, and seems set to make his second straight start for the Earthquakes on Wednesday night. After practice, he talked openly about the sacrifices he felt he made for the team and head coach Aron Winter as he was tasked with playing an assortment of roles for Toronto FC this season. Knowing that new coach Frank Yallop wanted him for his abilities as a right midfielder was encouraging for the 25-year old Indiana University product, as his best games during a 5-and-a-half year MLS career have come at that position.

“When you come in the middle of the season you try to mesh and gel as quick as you can,” Peterson explained, “but there are going to be ups and downs. We are learning on the fly, three games in one week is a good way to start, I guess. I am learning what the tendencies of the guys are we’ll go from there, but it is starting off well.”

Another Quakes midfielder doing great work on Tuesday was Bobby Convey. Recently announced as a selection to represent MLS against Manchester United in the 2011 MLS All-Star game on July 27, Convey took touches at both left back and left midfielder in training, as well as participating in an extended shooting drill to cap of the morning. He pronounced himself fully fit and ready to play this week following a month off to rehabilitate a knee injury that has kept him out of the past four MLS regular season matches. Convey also expressed his excitement to be going to New York for the All-Star game, with the prospect of playing in front of his family especially something he is looking forward to next Wednesday. The recognition by New York Red Bulls and MLS All-Star coach Hans Backe that Convey deserved a place in his matchday 22-man roster also gives him a sense of obligation to do well for himself and the league.

“When English teams come to play in their preseason, they want to win every game,” said Convey when asked about the opponent. “They are not taking it lightly and thinking it is just an All-Star game where the score might be 6-5, they don’t come to play that way. Last year was a bit thrown together, so the coach has picked some good players to give Manchester United a good game this year.”

Backe stated earlier in the week that his selections were based on having pace in the line-up to help avoid the pressing style Manchester United is known to employ. With that in mind, some surprising selections were made to the team, including Colorado’s Omar Cummings and Houston’s Corey Ashe. Convey is part of that eye-brow raising group, if only because he has not featured for the Earthquakes for the last few weeks. Coach Yallop confirmed that he talked to Backe ahead of his selections being finalized about the fitness level of Convey, and he let the New York coach know that the Quakes defender would be ready to go next week. As to whether he gets any playing time against Man U, Convey must wait to learn more from the All-Star coaching staff.

“We’ll see when I get there. I haven’t spoken with the coach yet, so I’ll go in and see what the plan is going to be when I get there Monday. I would love to play, it would be great to play in front of my family, and it is always a shop window to play well when everyone is watching so it will be a big game.”

Lastly, while some players drifted off the field and headed for the locker room, others stayed behind for a competitive game of shoot-around, with Ramiro Corrales donning the gloves between the posts. Some shots went in, others clanged off the woodwork, and occasionally “Rams” would make a spectacular save. One player in particular was having a great time, newly signed — but not the newest Earthquake — Rafael Baca. When he wasn’t blasting the ball on net, he was taunting other teammates when they missed their shots with a lustfully shouted “¡Se la perdió!” ala Pablo Ramirez on Univision futbol.

The Earthquakes made official just hours after training what had been expected for quite some time around San Jose as they waived midfielder Omar Jasseh. The Gambian appeared in only 5 games for the Quakes in one-and-a-half seasons, and failed to notch a goal or an assist in his 89 total minutes of action. This season, Jasseh played the last 13 minutes of the 2-0 away loss at Chivas USA on July 6 and the second half of the West Bromwich Albion friendly on July 12.

When Jasseh signed as a then 17-year old on April 14, 2010, he was seen as a bit of a project by the coaching staff. With lightning quick speed and a strong finish from both feet, Jasseh was given time to adjust the rigor and pace of MLS in his rookie year. Late in the preseason this year, Jasseh struggled to find his form following a hamstring injury, and spent the majority of the spring in rehabilitation. Upon achieving full fitness, Jasseh trained with the team on a regular basis, but did not impress in his two outings this month. The coaching staff openly criticized his commitment to playing on both sides of the ball, and that failure to improve his defensive skills ultimately led to his release from the team.

By waiving the Gambian midfielder, the San Jose Earthquakes collect back an International player slot on the 30 man roster. Currently at 28 players, the team has room to make more signings during the MLS summer transfer window, so that International slot might just come in handy.