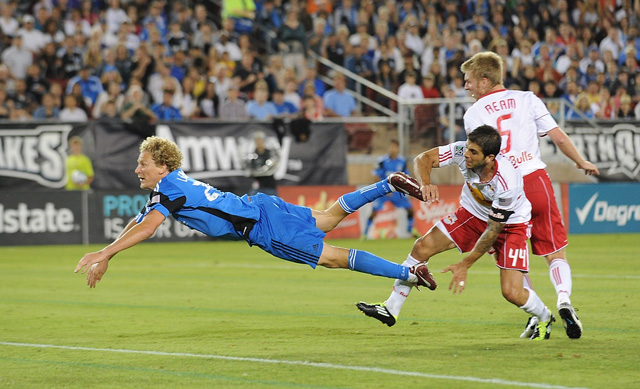 (Palo Alto) In front of a record crowd of over 41,000 at Stanford Stadium, the San Jose Earthquakes battled back from an early deficit to take a 2-1 lead, but were denied a win when Joel Lindpere’s second goal of the game deflected in off defender Bobby Burling in the 85th minute, lifting the New York Red Bulls to a 2-2 tie.

“I saw it, and had a good read on it,” San Jose goalkeeper Jon Busch said of Lindpere’s game tying shot. “It’s a helpless feeling, because you’re going one way, and it’s going the other (after the deflection), but it happens.”

Saturday night was one to forget for Burling. After playing a role in the tying goal, Burling picked up his second yellow card of the match in stoppage time, leaving the Quakes shorthanded not only for the game’s remaining moments, but for next Wednesday’s match against Chivas USA. With Burling out and Brandon McDonald sold to DC United, San Jose coach Frank Yallop is searching for center backs.

“There are a few choices (for center back). Chris Leitch has played there, Brad Ring’s played there,” Yallop said. “We’ll see how we’re doing, and make a decision once Monday comes.

“The red card for me was a mystery,” Yallop said. “I thought Bobby Burling was getting pulled back, and we were on a three on one break. I haven’t seen it (on replay) but it seemed like a weird call.”

“Bobby’s red card, in my opinion, is not a red card,” Busch said. “The guy who’s on the ground grabs his ankle and pulls him first. I thought the referee was giving us a free kick, because the guy who fell down clearly grabbed Burling’s foot, and makes him stumble.”

The largest non-doubleheader crowd in Earthquakes history, 41,028, saw both teams welcome the return of some serious scoring threats just back from national team duty from the Gold Cup. Chris Wondolowski was in the Earthquakes line up, replacing Bobby Convey (out with a bruised left knee) in midfield, while the Red Bulls started Juan Agudelo at forward.

New York was without a couple of their Big Names. Thierry Henry had to sit out due to the flu, and Rafael Marquez was out nursing a strained hamstring. Dwayne DeRosario was also missing, traded midweek to DC for Dax McCarty.

The Red Bulls open the scoring in the 7th minute. From the left wing, Roy Miller sent a diagonal ball into the penalty area for Joel Lindpere, who was covered by two San Jose defenders. From eight yards out, Lindpere’s first shot was blocked by the defense, but the ball fell to him for a second chance and he made no mistake, easily rolling the ball past Jon Busch to put NY on top.

“I think they stunned us a little bit with the first goal,” Yallop said. “It seemed a fortunate bounce to Lindpere, who finished it well.”

San Jose evened the score in the 37th minute, when Simon Dawkins sent a corner kick into the danger area and Red Bulls goalkeeper Bouna Coundoul couldn’t hang on to the ball in traffic. It bounced to Khari Stephenson near the penalty spot, and Stephenson slammed home a left footed volley to even the score.

“It lifted us once we scored — we played a lot better,” Yallop said.

San Jose looked certain to take the lead in the 67th minute when Chris Wondolowski had a open shot from 15 yards, but his right-footed blast banged off the right post. “It surprised me when he didn’t score," Yallop said. “He usually buries those.”

The Earthquakes surged ahead a minute later when Steven Beitashour sent in a long diagonal ball from right midfield, and Steven Lenhart split two defenders to head it home from six yards out. Lenhart celebrated by swinging on the cross bar, and it looked like San Jose was on their way to a win.

But the Quakes could not close out the game. In the 84th minute, Joel Lindpere let fly from the top of the box, forcing Jon Busch to make a diving save. It looked like the rebound was going out of play, but a hustling Mehdi Ballouchy tracked it down and teed up Lindpere for a second shot, which deflected off of Burling and past a helpless Busch for the equalizing goal.

“I think we all thought it was going to go out,” Busch said. “It stayed in on that sideline, and credit to Ballouchy, he got it and kept it in play. It was right on the end line.”

“The nature of it, a deflected goal, is always hard to take,” Yallop said. “Jon (Busch) is going to save the shot, and it bounces off of Bobby's head and goes in.”

The tie, San Jose’s second in a row, moves their record to 5-5-6, good for 21 points, 9th best overall in the league. The Earthquakes next travel to LA to face Chivas USA on Wednesday.