Earthquakes winless streak now at a club-record 11 games, but help is on the way

Share All sharing options for: Earthquakes winless streak now at a club-record 11 games, but help is on the way 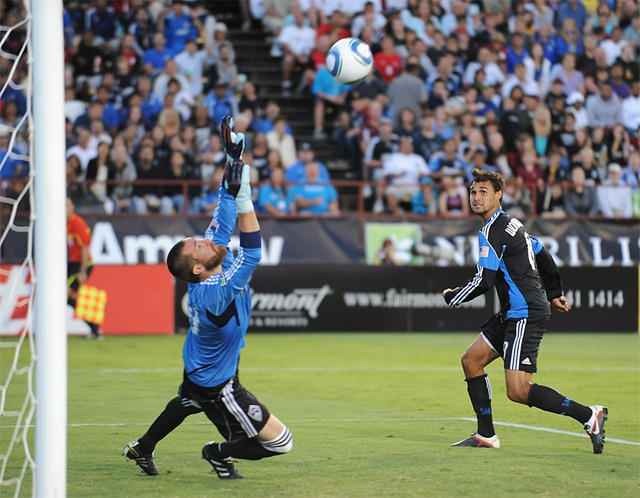 (Santa Clara) First, the good news. According to San Jose head coach Frank Yallop, the Earthquakes are about to sign an attacking player from Brazil to help their injury-ridden attack and possibly breathe new life into the team’s chances of making the playoffs.

"There should be someone coming in for sure," Yallop said. "John (Doyle) has done all the paperwork."

Yallop wouldn’t say who the incoming player is, or when we can expect him to join the team. "(The process) is never (done in) a day, that’s for sure, but we’re hoping to get him acclimatized as soon as possible. He’s (been) playing, so he’s match fit, hopefully."

Now, the bad news: San Jose set a record they didn’t want Saturday night, stretching their current winless streak to a worst-ever 11 games by dropping a 2-1 decision to the Colorado Rapids. Jeff Larentowicz slammed a 25 yard free kick though the San Jose defensive wall and into the net midway through the second half to lift Colorado to their third straight win, beating a 10-man Earthquakes team that had a couple of controversial calls go against them.

"For some reason, we’re not getting the breaks, but I thought we played very well tonight, well enough to win." Yallop said. "The referee decided differently, and here we are, trying to explain a loss that shouldn’t be."

San Jose’s starting 11 was the same one that lined up against Portland last Saturday, except for one change: with Scott Sealy injured in training, Khari Stephenson stepped in at forward alongside Chris Wondolowski. Simon Dawkins returned to action after missing three games, entering the match in the 70th minute.

Colorado started the night without several of their top attackers. Team leading scorer Conor Casey is out for the rest of the year with a torn achilles, and two other Rapids’ players were recovering from jet lag after being called in to National Team duty midweek. Omar Cummings started on the bench after playing for the Jamaican national team in China Wednesday. Sanna Nyassi, who had returned home to play for Gambia, was not included in coach Gary Smith’s 18.

Colorado created the game’s first chance in the 7th minute. From the right wing, Brian Mullan sent a diagonal ball that hit Caleb Folan in stride in the penalty area. Folan’s header from 10 yards beat San Jose net minder Jon Busch cleanly, only to be denied by the right upright.

San Jose’s first chance came at the quarter hour mark, after Sam Cronin released Joey Gjertsen down the right side. Gjertsen’s centering pass was cleared away by the Colorado defense only as far as Bobby Convey at the top of the penalty area. Convey hit it first time, a well struck volley that missed wide left.

The Earthquakes kept moving forward, and finally broke through in the 22nd minute when Convey sent a low, hard pass from the right side to Chris Wondolowski racing in on goal. Wondolowski got a touch to direct it on goal, forcing a quick reaction save from Colorado goalkeeper Matt Pickens, and the rebound popped up for an onrushing Joey Gjertsen to head home from close range. It was Gjertsen’s first goal of the year.

But the Earthquakes could not hold on to the lead, thanks in large part to a couple of decisions made by referee Paul Ward.

Colorado scored the equalizer after a controversial call in the 39th minute. Colorado was attacking down the right side, and Pablo Mastroeni’s centering pass from near the end line was blocked by a sliding Sam Cronin, hitting his trailing hand. Mastroeni and the entire Colorado bench screamed for a hand ball, and after conferring with the linesman, referee Ward agreed, awarding a penalty kick.

"It’s not even a hand ball," Yallop said. "He’s sliding, and it hits his back hand. That rule just drives me nuts. We’re just getting screwed all the time."

On the ensuing penalty kick, San Jose’s Jon Busch guessed the wrong way, and Folan calmly banged it past him for his fifth goal of the season.

Things only got worse for Cronin and the Quakes after the break. In the 50th minute, Cronin clattered into Pablo Mastroeni in midfield, and was given a straight red card.

What did Yallop see on Cronin’s challenge? "Nothing. I don’t think he even touched him. We’re getting some bad calls. That’s all I can say about it."

Though they were down a man, San Jose looked likely to go back on top 56th minute when Gjertsen sent in a driven cross for Wondolowski, but Wondo’s shot from the six yard box sailed over the crossbar.

"Even after the red card we played well," Yallop said. "We outplayed them, and were the better team. But we didn’t get any points."

Colorado almost bagged their second goal ten minutes later when Jeff Larentowicz got on the end of a Wells Thompson corner kick. Larentowicz’s strong header was cleared off the line by Brad Ring, standing at the right post, and Busch easily handled Folan’s follow up effort.

But Larentowicz would eventually score the deciding goal for Colorado. In the 72nd minute, the Rapids teed up a free kick for Larentowicz, who drilled a low shot from 25 yards that nutmegged Dawkins in the defensive wall and cleanly beat Busch inside the left post.

San Jose continued to test the Colorado defense in the game’s closing quarter hour. Wondolowski had a couple more chances before the night was done, but didn’t do much with either of them. Two minutes after Colorado took the lead, Wondo had an open shot from 15 yards that was hit straight at the goalkeeper. In stoppage time, an Ellis McLoughlin cross from the left corner found Wondo near the penalty spot for an open header, but his shot went wide right.

"I think the team, under bad circumstances tonight, played well," Yallop said. "Wondo could have scored two after the red card, and he really should have. We could have won, 3-2, with ten men, and it (would have been) one of our greatest performances. But we didn’t so it’s hard to explain why."

With the loss, San Jose is now five points shy of the last playoff spot with ten games left in the regular season, and seven of those matches will be on the road. "We’re not in panic mode, but we don’t have a ton of time," Yallop said.

The Earthquakes travel down to the Home Depot Center to face the LA Galaxy next Saturday.

"Sport is cruel, and especially soccer," Yallop said. "We’ll just keep going. Hopefully the player we’re bringing in will have an immediate impact."