Share All sharing options for: San Jose Earthquakes versus Los Angeles Galaxy match preview: Robbie Keane arrives in LA just in time to face the Quakes in the California Clasico 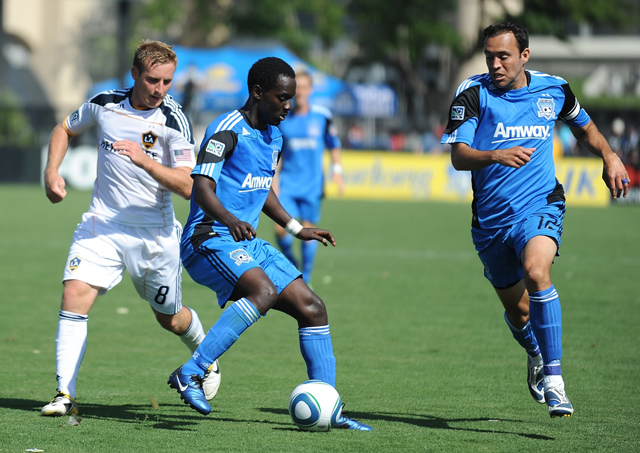 In the week leading up to the second leg of the 2011 California Clasico between the San Jose Earthquakes and Los Angeles Galaxy, both teams added new forwards to their rosters just as the MLS summer transfer window closed. In San Jose, Ecuadoran international Edmundo Zura was signed on a loan deal from his home country team El Nacional; while in Los Angeles, Ireland international and team captain Robbie Keane was bought from Tottenham Hotspur and signed by MLS as a Designated Player. Both players are expected to play in tonight’s match at 7:30 p.m. at the Home Depot Center.

Given that Zura was unavailable for training this week as the Earthquakes prepared for their chief in-state rival. He was scheduled to receive his P-1 visa at the American consulate in Quito, before embarking on the trip to the U.S. As of Thursday, the plan was for the Ecuadoran striker to join the team in LA, where head coach Frank Yallop would assess in what capacity he would employ his new player against the Galaxy.

“I think he’ll be in for the game,” shared Yallop, “whether it is Friday before training or he just goes straight to LA either Friday night or Saturday morning. He should be available. If we need a goal we may as well see what he is all about.”

The Earthquakes are in desperate need of some scoring help, so the expectations will be high for Zura to show he can help the team create and finish in front of goal. Though currently not a DP, general manager John Doyle will have the option of purchasing the contract at the end of the season, a move that might catapult Zura and his salary into the category. With the team six points adrift of a postseason berth entering the weekend, San Jose will need to average at least two points from each of the 10 games remaining on their regular season schedule. Since draws earn just half that amount, victories in the majority of their games over the last stretch of the season are imperative. In the meantime, the team will have to make do with the roster they have and the hope Zura can bolster a struggling Quakes offense.

“The time will come I’m sure,” shared Yallop, “when we will use the money wisely and get a DP, i.e. one or two, to help us out because the league is changing. Everyone seems to be doing it. At some point we will have that — when is the thing. Having one or two real guys would help us.”

Meanwhile, the Los Angeles Galaxy are riding high atop the Western Conference standings as the ready themselves to face the Quakes. The league favorites to capture the Supporters Shield, the Galaxy made a huge upgrade on offense by signing Keane as their third DP. Joining David Beckham and Landon Donovan, the Galaxy now boast a line-up that features three players that at one time were captains of their respective national teams. And at age 31, Keane should have plenty left in the tank to be an impact player in MLS, something that is not lost on Earthquakes goalkeeper Jon Busch.

“He’s a top quality player,” admitted Busch. “We were just talking this morning that he’s going to be a great DP for this league. He’s going to make an impact, he’s a goal scorer, and he’s a big-time international. It’s pretty exciting to be facing him in an MLS game. He’s here for the right reasons, so I think it is going to be great for the league.”

Busch and his Earthquakes teammates received a peek at the Irish international last summer, when he featured for Tottenham Hotspur in a summer friendly at Buck Shaw Stadium. Coach Yallop remembered the focus his team needed on defense to keep track of Keane’s dangerous off-the-ball movement.

“At least it’s a player we have stood on the field against,” said Yallop. “Our defenders in Bobby and Jason, our centerbacks, will at least know what he looks like. Although they were in preseason at that point, he was still sharp in the game and had a couple of chances to score.”

That memorable game finished in a scoreless draw, but the talented Keane was always at the front of the attack, and gave the aforementioned Quakes defensive duo of Jason Hernandez and Bobby Burling plenty to be concerned about during his appearance.

“For the small time I was able to play against him,” recalled Hernandez, “he was very dynamic off the ball and made very good runs. Obviously Robbie Keane brings a lot of experience playing at the highest level. A guy like that doesn’t stay around top leagues in the world for no reason. He’s obviously a dangerous target for them, and will be important for us all to do a diligent job of keeping an eye on him and defend as a group and hopefully keep him off the board.”

“Last year we faced him in his preseason, so maybe he wasn’t 100% fit,” said Burling, “but anytime you come to a new club you want to impress to win your teammates over, to win the fans over. So he’ll be buzzing around and causing havoc for sure.”

One player on the Earthquakes that has an even greater understanding of the abilities of Keane is his former teammate at Spurs, midfielder Simon Dawkins. The two attack-minded players trained together often, and the on-loan Dawkins was sure to shadow Keane at every opportunity as he developed his game. The potential to face his mentor in a meaningful match also added to the allure of the upcoming game against the Galaxy.

“Robbie is one of the few guys in football I’ve tried to learn from,” revealed Dawkins. “Since I was at Tottenham he had always been there, and I tried to pick up his good habits. I’ve tried to base my game on him a little bit and watch him every day in training and put that on the field. He always put his arm around me and tried to help me every day in training so it is going to be fun if he plays to see him.”

While Keane is sure to garner much of the attention on and off the field Saturday evening, the Galaxy have a roster loaded with quality players at every position, including their other two DP’s Donovan and Beckham — both of which were absent earlier this season when the two teams played to a scoreless draw at Buck Shaw Stadium. Defender Hernandez remained resolute in his stance that the Earthquakes would not be star-struck by the Los Angeles line-up.

“Anytime we play the Galaxy it is a big game for us,” said Hernandez. “Obviously with the history between the two clubs, our games are pretty intense and pretty close. Them having some of their offensive weapons back gives them a boost, but we have guys that will be back for us as well. Hopefully we can go down there and neutralize their big-name players. Between the lines it is important that we do an honest and a blue-collar job of playing well on the road. If we can return to that, we will be fine.”

Coach Yallop was also eager to steer the conversation away from Robbie Keane and back to the daunting challenge at hand — earning points against the MLS leaders. Given that the Home Depot Center pitch is both longer and wider than the field at Buck Shaw Stadium, he recognized that a slight adjustment in their defensive tactics would need to be employed during Saturday’s road match.

“We’ll probably drop the line a little bit, but our pressing has to be good,” said Yallop. “You can’t do it all over the field there, because they’re a good team and they’ll break you down. If we are nice and compact and pretty high up the field and we’re not dropping, I think we have a pretty good chance of doing well. We are not really a counterattacking team right now, so we have to try and win the ball in the middle third and break from there.”

After three successive home games where the Earthquakes pressing style allowed them to be more involved in possession while keeping their opponents guessing, another leap in execution will be required against the Galaxy. The deck certainly looks stacked against San Jose in their match tonight; only a careful and flawless performance will give the Earthquakes a chance to pick up valuable points toward their goal of qualifying for the postseason.