Share All sharing options for: Wondolowski’s late goal gives San Jose Earthquakes a point on the road, but winless streak now at 13 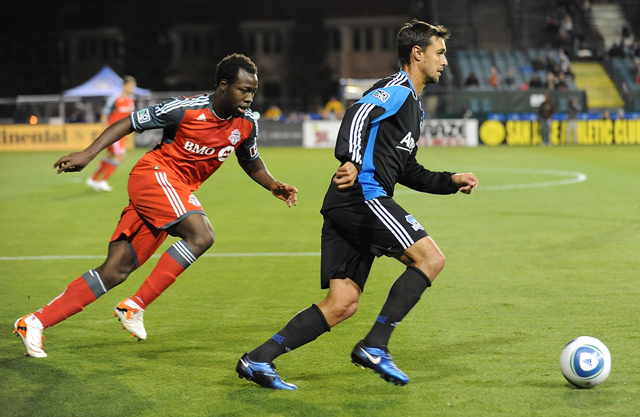 Chris Wondolowski broke a personal five game scoring draught, hitting the back of the net in the 87th minute to lift the San Jose Earthquakes to a 1-1 draw with Toronto FC Saturday at BMO Field. Wondo’s late heroics, coming only a couple minutes after a linesman’s call denied Toronto a second goal, gave San Jose just their second point in their last six matches. He was very pleased that the team did not give up and eventually earned the equalizing goal.

“It’s a great feeling,” shared Wondolowski.  “It shows how resilient we’ve been.  That being said, I still think we were left a little bit disappointed. We want to get three points whenever possible and I thought we played fairly well.  We had one pretty bad mistake and we got punished for it.”

With their club record winless streak now at 13 games, and only eight games left on the schedule, time is running out on San Jose’s hopes of making the playoffs, but Frank Yallop is trying to keep it positive.

“Anytime you come back from a losing position in the match and get a tie out of it, it feels good,” said Yallop.  “I thought for long spells of the game we had possession and we had some great chances.  Although Toronto had a couple of good breaks, I think the general possession, the general play, was good by us.  I thought we deserved more out of the match.”

Edmundo Zura was not in the San Jose 18 Saturday, as he works to regain full match fitness. Even without their newly signed forward, the ‘Quakes started the game on the front foot. By intermission, they were on the back end of a 1-0 score.

Six minutes in, Wondolowski tried to deflect a Joey Gjertsen shot past Toronto goalkeeper Milos Kocic, but from six yards out his effort missed wide of the right post.

In the 12th minute, Rafael Baca drove a low cross from the left corner to Simon Dawkins, but Dawkins’ shot from near the penalty spot was deflected by a Toronto defender and flew just inches over the cross bar.

Toronto got a rare opportunity just after the half hour mark, and made the most of it. Ramiro Corrales’ sliding tackle knocked the ball away from Peri Marosevic at the top of the arc, but it fell nicely for Eric Avila, who pounced on loose ball. Charging into the penalty area, Avila rolled a right footer past Jon Busch, beating the San Jose net minder cleanly inside the left post to give the home side a 1-0 lead.

Toronto kept the momentum after the break. Torsten Frings had a couple of tight angled shots in the first ten minutes of the second half, but Busch was able to punch both of them away.

San Jose responded with some long distance shots just after the hour mark. Bobby Convey hit a 30 yarder well, but missed wide right. Wondolowski let fly from 25 yards, but hit it right at Milos Kocic, forcing the Toronto goalkeeper to make his first save of the night in the 72nd minute.

Toronto thought they had doubled their lead in the 76th minute, when Ryan Johnson slipped a pass through the middle of the ‘Quakes high line to Joao Plata.Plata dribbled past Jon Busch and rolled the ball into the empty net, only to have his goal celebration interrupted by the linesman who ruled the play offside. Television replays showed the linesman probably got the call wrong.

Given this lifeline, San Jose was able to salvage a tie. With less than three minutes left in regulation time, ex-TFCer Jacob Peterson sent a long throw-in to Bobby Burling at the near post. Burling’s flick on header found Wondolowski at the far post, and from close range Wondo buried it for his ninth goal of the season.

“That’s what we were looking for,” said Peterson.  “I’ve got a pretty long throw, I put some time in at the gym and the guys give me a hard time about it, but you know, that’s what it’s for.  I’m aiming to hit Bobby (Burling). Bobby’s a big boy, he’s strong in the air and he’s brave.  We’ve got great finishers in the box and Wondo (Chris Wondolowski) got on the end of it.”

Under different circumstances, Saturday’s 1-1 tie on the road could be a strong positive, but now only three MLS clubs have fewer points than San Jose (Toronto is one of them) and time is running short. The ‘Quakes will also be without winger Bobby Convey in their next match, as Convey will be sitting out the game due to yellow card accumulation.

San Jose has a week off before hosting Chicago September 10.