The streak is over as San Jose Earthquakes defeat Chicago Fire, 2-0

Share All sharing options for: The streak is over as San Jose Earthquakes defeat Chicago Fire, 2-0 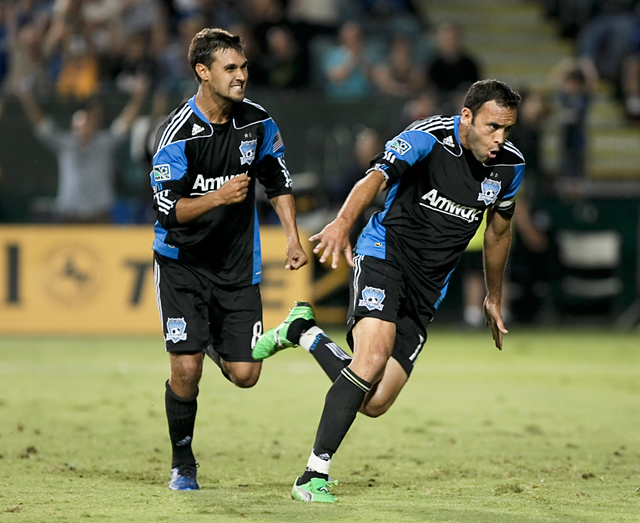 (Santa Clara) At the start of the season, the Earthquakes’ recipe for success was a simple one: Wondo scores the goals. Busch makes the stops. Oh, and a little luck wouldn’t hurt, either. It’s something the Buck Shaw faithful haven’t seen much of in 2011, but Saturday night things went according to plan for San Jose, as the Earthquakes broke a club record 13-game winless streak by beating the Chicago Fire 2-0.

San Jose coach Frank Yallop summed up the feeling in his team’s dressing room: "Relief, I think the word would be."

"It’s been a long haul, and it’s been coming to us," Jon Busch said. "We’ve been playing better and better; we’ve just been a little unlucky the last few games. Tonight was a gritty performance. We’ve been going through hell the last (13) games and it’s nice to finally get on the other side."

Chris Wondolowski scored ten minutes into the match and assisted on a second half goal by Ramiro Corrales, and Jon Busch and the Earthquakes’ back line earned their seventh clean sheet of the season to lift San Jose past Chicago on the night, and in the overall standings.

With the win, San Jose now has 29 points, six behind 9th place Houston. The Earthquakes have a game in hand on the Dynamo, and will travel to Houston next Saturday for another "must win" game as they try to climb back into the playoff picture.

"If we get a win there, then we’re right back in it," Yallop said.

"In the locker room, everybody believes," Busch said. "We haven’t given up. A lot of people have written us off, but we know we’re just out of the playoffs. It’s not too far away, if we can string a couple (wins) together."

With Bobby Convey sitting out a one game suspension due to yellow card accumulation, Frank Yallop again had to shuffle his starting 11. San Jose made four changes from the line up that faced Toronto two weeks ago.

Rafael Baca got his third straight start in midfield, and the move paid dividends for San Jose. Ten minutes in, Baca took a throw in on the left side and curled a diagonal ball to the far post for Wondolowski to run on to. Wondo slammed home a volley from 10 yards out for his 10th goal of the season, and second in as many games.

The Earthquakes got a break seven minutes later when Chicago looked sure to equalize after Patrick Nyarko released Dan Gargan down left side. One on one against Busch, Gargan’s right footer beat the San Jose net minder cleanly, only to be denied by the left upright.

In first half stoppage time, Chicago had two more chances to get on the scoreboard, only to be turned away by Busch. First, a Khari Stephenson give-away in his defensive end allowed Patrick Nyarko to send Dominic Orduro in on goal. Busch came of well off his line to block Orduro’s shot. Seconds later, Pavel Pardo also had an open look, slamming a volley from 20 yards that Busch was able to punch away.

"Every chance they had, we gave the ball away in a bad area," Yallop said. "I love the way we came out in the second half, after weathering the storm of the first half where (Chicago) should have scored at least one. Jon made a great save on one of them and they hit the post on the other."

"We didn’t make any mistakes the second half, and they couldn’t break us down," Yallop said. "I don’t think Jon was that troubled (in the) second half."

Chris Wondolowski had several great chances to score after intermission, but couldn’t find the back of the net. "Wondo looked dangerous," Yallop said. "He could have got four or five tonight. He had some good chances."

Wondo’s best chance came in the 53rd minute, when San Jose was awarded a penalty kick after Chicago’s Jalil Anibaba was called for a handball in the penalty area. Wondo hit his PK well, but Chicago’s Sean Johnson dove to his right to make the save.

Johnson made three other quality stops against Wondo in the second half, but he couldn’t keep San Jose from doubling their lead. Unable to score himself, Wondo helped the Earthquakes get on the scoreboard again in the 69th minute, working a nice give and go with Ramiro Corrales that set up the San Jose captain with an open 10-yard shot. Corrales did not miss, effectively icing the game, and breathing some new life into the Earthquakes’ playoff hopes.

It’s amazing what 3 points did to lift the mood at Buck Shaw. The fans behind the north goal, who were calling for Frank Yallop’s head not long ago, were singing his name in the second half. The San Jose coach responded with a friendly wave.

"I don’t look at (the winless streak), I look at performances, and I think we’ve performed really well our last six games," Yallop said. "I’ve said to (the team) all along. You’ve played well enough to win more games this season. For whatever reason we’ve not won (more), so, don’t give up, don’t ever lose the faith that we can win games, and I don’t think they ever have. They’ve given me everything they’ve got. All that hard work they put in the past six games paid off tonight. Let’s hope we now got to Houston with a fresh attitude that we can win that game."