Share All sharing options for: Quakes Cast Episode 28: The winless streak is over as the San Jose Earthquakes defeat the Chicago Fire, training report interview with head coach Frank Yallop 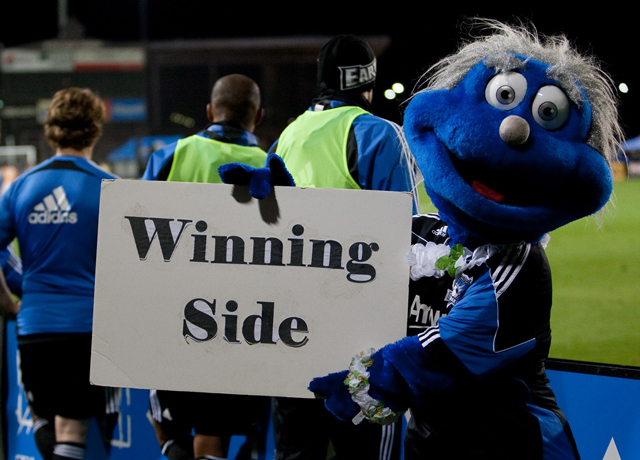 Unlucky number 13 was the limit for the Earthquakes, as the team finally found all three points against the Chicago Fire in a 2-0 victory. The performance was as fun to watch as it was effective, as the Quakes’ midfield-heavy line-up finally paid dividends against one of the league’s least physical defenses. Also, in a bit of a coincidence, the Earthquakes’ goals were again provided by Chris Wondolowski and Ramiro Corrales — just like they did against the Fire back on May 28. Throw in the fact that Wondo reached double digits for goals on the season with his game winner against Chicago, and the night was a grand success for a team struggling to find the positive.

Of course, winning also makes for a happier Quakes Cast, and your three hosts deliver the goods on Quakes news as well as plenty of listener questions and comments. This week, they asked the audience where they think Corrales is best positioned in the Earthquakes’ formation, and the answers were as varied as the positions the Quakes’ captain has been asked to play. With technical difficulties paring down the feedback segment of the show, Robert and Kelly record a bonus training report live from the Earthquakes training facility. Head coach Frank Yallop’s interview with the amassed press corps highlights the report and provides a bit of insight into what the gaffer is planning with just seven games remaining in the season. Being out in the sun with the fresh smell of the grass was a better choice anyway; maybe the Quakes Cast will be blessed with further technical difficulties in the future.