Share All sharing options for: San Jose Earthquakes fail to protect first half lead, fall 2-1 to the Houston Dynamo 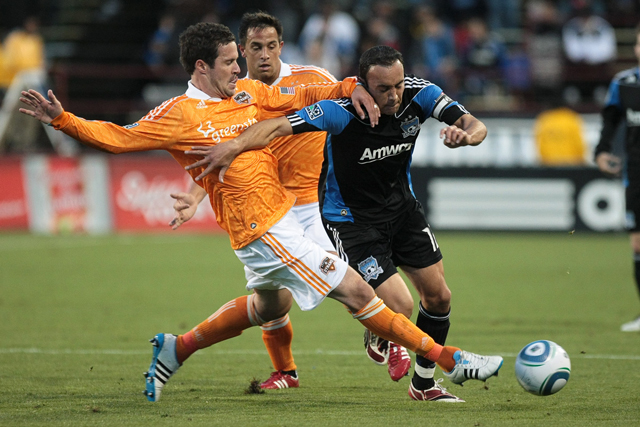 After a first half goal from Khari Stephenson put the visiting San Jose Earthquakes up a goal going into the intermission, the host Houston Dynamo scored twice in the second half to take all three points at Robertson Stadium. A penalty kick goal from Brad Davis in the 47th minute was followed up by a Will Bruin match-winner in the 79th minute helped Houston edge closer to a MLS playoff berth with the 2-1 victory, while the loss severely crippled the Earthquakes chances of qualifying for the postseason.

For the third time this season San Jose failed to protect a one-goal lead and saw their opponent secure victory with two unanswered goals — the other two cases were at home to Chivas USA and at home to the Colorado Rapids — to lose by a score of 2-1. The three come-from-ahead loses ranks the team at the top of MLS, alongside Sporting Kansas City, and helps explain why the team sits near the bottom of the Western Conference table. In 2010, fortunes smiled upon the Earthquakes, and they found ways to win rather than lose; that has not been the case for much of 2011.

“Last year we found a way to win these games,” lamented forward Chris Wondolowski, as the Quakes have failed to find victory in 14 of their last 15 games. “This year we are shooting ourselves in the foot a bit. We are making a couple of mistakes and getting punished for them and not finishing when we should.”

The Earthquakes played well for stretches of the match against the Dynamo, but the overall performance seemed a notch below their effort from the last couple weeks — including the comprehensive 2-0 win over the Chicago Fire last weekend. Unlike that match, the Quakes maintained possession through the midfield, but found it much harder to penetrate the attacking third and create scoring opportunities against talented central defenders Bobby Boswell and Geoff Cameron of the Dynamo back line.

“If you look at the quality of chances in the game, we had a couple of breakaways we should have done better on,” assessed head coach Frank Yallop following the defeat. “We knew that with the Dynamo being at home, they are going to put you under pressure. Coming out of the second half and conceding a goal in 30 seconds is not good. I can’t fault our guys for effort. At least getting a tie out of the game would have been just. In the second half, it was pretty even.”

Stephenson scored a wonderful volleyed goal for the visitors in the 40th minute, following a counterattack initiated by Joey Gjertsen and a cross into the area from Steven Beitashour to give the Earthquake a 1-0 lead. Unfortunately, Stephenson was unable to convert on two other opportunities in the match — the two bet chances the team would earn in the match — as he continued to play as a second striker in coach Yallop’s makeshift forward formation.

“I think the coaches put me out there because they feel I can do a good job,” stated Stephenson on getting his fourth straight start as a forward. “I have been doing OK, and I’ve been pleased with how I’m doing so far. I scored a goal tonight, and I probably should have had two more. Then again, it is not my position, but I feel as if I have the qualities and I should be able to put away those chances.”

The loss dropped the Earthquakes further down the MLS playoffs qualifications standings, and left them with only 29 points after 28 matches. With 6 games remaining on the schedule, including two more matches this week on the road at the Portland Timbers and the Colorado Rapids, San Jose will realistically need to win 5 of those games to give themselves 44 points on the season and an outside chance of making the postseason for the second straight year.

Following the win last weekend against the Fire, coach Yallop trotted out the same starting XI with one change as Nana Attakora replaced the injured Jason Hernandez on the defensive line. The game started with both teams looking to assert themselves on possession, with the Dynamo taking the advantage in that category as they tipped the balance in central midfield in their favor. Rafael Baca and Sam Cronin paired up in the center of midfield, but did little to link possession with the forward line for much of the opening stanza. Instead, the Earthquakes focused more of their downfield effort on the left flank, where Simon Dawkins as the winger and Ramiro Corrales as the left back consistently pushed the ball up the touchline looking for Wondolowski and Stephenson.

In the 8th minute, a pass to Wondo playing near the center circle was pushed out to Dawkins on the wing. The Englishman, took a touch into the Houston half, and sent a through ball into the stride of Stephenson heading toward goal. With the Dynamo defense in quick pursuit, Stephenson could only send a tame shot right into the waiting arms of goalkeeper Tally Hall and the counterattack came up empty.

Meanwhile, the Dynamo were getting numerous chances in the attacking third, but were consistently undone by their failure to get on the end of crosses and dangerous passes into the area. Perhaps sensing that his team needed a more direct approach, midfielder Brad Davis dribbled the ball in the Quakes’ area in the 18th minute where he first turned Gjertsen and then Beitashour as he drove toward the goal. Sensing the slightest of touches by the Earthquakes second-year defender, Davis tumbled to the ground looking for a penalty call, but was instead rewarded with a yellow card for simulation.

Houston did not back off following the play, and twice nearly capitalized on mistakes by the Earthquakes defense. In the 31st minute a weak back pass from Bobby Burling was intercepted by forward Calen Carr and he zeroed in on goal, but his chip-shot attempt over goalkeeper Jon Busch went wide of the target. Four minutes later, a misdirected clearance from Attakora fell right to the feet of Davis 30 yards from goal, and the Dynamo MVP laid the ball into the path of the onrushing Corey Ashe. However, the defenders strike from a tight angle was deflected out for a corner kick by the desperation slide of Beitashour.

After concentrating their play on the left side for most of the first half, the Earthquakes broke through for the game’s first goal in the 40th minute by utilizing the right side. With right winger Gjertsen pulled all the way into the center circle, he took a pass from the left and immediately turned to find Beitashour exploiting the wide open space along the right touchline. Gjertsen fed the ball to the sprinting defender, who carried the ball to the edge of the Houston area. Meanwhile a trio of Earthquakes made their runs into the attacking third, with Wondolowski, Stephenson, and Dawkins all calling for the ball. Beitashour chipped a deft cross into the area, where Stephenson stepped past Wondo and volleyed a right-footed shot inside the far post for the goal.

The first half ended with San Jose holding a 1-0 lead despite Houston holding an edge in possession and scoring opportunities over the 45 minutes. However, less than a minute after the intermission, the Dynamo were finally rewarded for their dominance.

With a ball down the left touch line falling to the feet of forward Carlo Costly, Attakora came over to break up the play, but unfortunately could not clear the ball away. When Beitashour tracked back to help, Costly somehow maneuvered the ball between the two Earthquakes defenders and fed a pass into the area for Davis. Cutting the ball from his left foot to his right, defender Burling clipped the Dynamo midfielder’s boot and he went sprawling to the turf. Unlike in the first half, the center official pointed to the spot and awarded Davis a penalty kick. Fortunately for the Quakes, Burling escaped any further punishment, but Davis evened the score at one goal apiece with a smartly placed kick that just eluded the diving Busch.

San Jose responded in the positive to relinquishing the lead through the work of Dawkins on the left side, and twice nearly restored their one goal advantage. In the 50th minute, the loanee from Tottenham dribbled into the Houston area, all the while keeping defender Andre Hainault back peddling, before squaring a nice ball across the top of the area for Stephenson. The Earthquakes forward elected to turn the ball away from goal instead of unleashing one of his patented right-footed blasts and laid the ball off for midfielder Cronin. Unable to keep the ball down, Cronin’s one-timed shot went well high and wide of the target.

In the 56th minute, the industrious work of Dawkins again created a good scoring opportunity for the Earthquakes, as he touched the ball to the left byline and pulled a pass back into the six-yard box for Wondolowski. Unfortunately for the Quakes’ leading scorer, the ball movement was in the opposite direction of his momentum, and the pass deflected harmlessly off his left foot for a goal kick.

The Earthquakes last great scoring opportunity of the evening came in the 71st minute following a defensive miscue from the Dynamo. After receiving the ball in midfield, Adam Moffat turned to fire the ball back to his goalkeeper Hall, but he failed to get much on the ball, and Stephenson raced forward in an attempt to intercept the pass. Defender Cameron was first to the ball, but he could only bounce it off Stephenson, and the Quakes forward collected the loose ball and carried it forward on his preferred right foot. With Cameron desperately tracking back to atone for his failed clearance, Stephenson fired a shot that went agonizingly wide of the target.

Houston completed their comeback on the night through the efforts of second half substitute Will Bruin. After a giveaway in the midfield, Luiz Camargo collected a pass near the right touchline, and turned to face the Earthquakes area. In a play reminiscent of Stephenson’s goal in the first half for San Jose, the Dynamo midfielder chipped a cross just inside the area, where a sprinting Bruin sealed off defender Beitashour and volleyed home a left footed effort back toward the near post. With his fifth goal of the season, the Dynamo rookie celebrated his well-taken match winner with teammates and the well-wishing fans at Robertson Stadium.

With two late game substitutions from the Earthquakes in the 83rd minute, forwards Matt Luzunaris and new loanee Maxwell Griffin did their best to bring a renewed energy to the San Jose attack, but could do little to challenge the Houston defense. A choppy foul-filled final 10 minutes mercifully came to an end, and the home team walked off the field with a 2-1 victory and all three points.