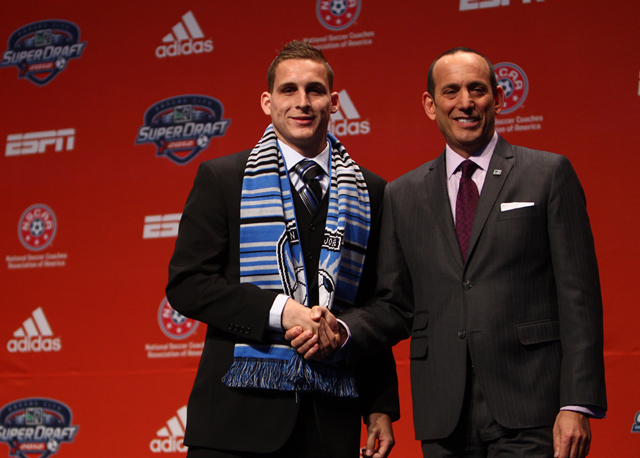 With the number six pick in the 2012 MLS SuperDraft, the San Jose Earthquakes selected forward Sam Garza. The speedy attacking player from Texas, who played his college soccer at UC Santa Barbara, signed a Generation Adidas contract with MLS back in December and will not have his salary count against the Earthquakes salary budget in the upcoming season. The 22 year old was caught a bit off guard at being selected at number six overall, but quickly settled in on what the task was at hand.

“My heart was racing and I was so excited to hear my name called,” shared Garza on the moment he heard MLS Commissioner announce his name. “I was kind of surprised, but it was definitely a thrill, and I can’t wait to get started with San Jose.”

Garza not only impressed with his speed at the MLS Combine, but also with his versatility on the ball. He was employed primarily as an outside forward with additional responsibilities to provide defensive coverage on the wings. Those qualities should translate well for the UCSB product in the Earthquakes system, where head coach Frank Yallop prefers midfielders that provide a good complement to the overlapping runs expected from their outside defenders.

“I think I bring a lot of athleticism, a lot of speed and creativity,” assessed Garza on his primary attributes. “I can open things up for my teammates and assist them on offense. I am comfortable on both sides of the ball. Hopefully I can score some goals and provide some good assists.”

Garza completed two seasons as a member of the UCSB Gauchos, where he scored 17 goals and registered 10 assists. To take full advantage of his speed, Garza often played from a wide position on the forward line, which gave him ample opportunity to provide service into the penalty area for his fellow offensive players. At the MLS level, Garza projects more as an outside winger then a true forward.

“I’ve played forward all my life,” said Garza when asked how he hopes to fit in with the Earthquakes, “and in the time since I went to the National Team and at Santa Barbara I’ve also played out wide. I can play on both wings, and I can play as a withdrawn forward. Hopefully I can combine with Wondo which I am really looking forward to.”

Garza was part of the U-20 U.S. Men’s National Team in 2009 and was projected to be part of the squad that participated in the 2010 FIFA U-20 World Cup before a serious ACL injury forced him out of the squad. The recovery process forced Garza to sit out the entire 2009 college season as well, but the Earthquakes newest player was quick to mention that the injury is well behind him.

“I feel I have worked hard and done what I needed to do to make a full recovery from where I was. It was kind of one of those freak things, but I have moved past that now and am only looking forward to starting preseason on Monday.”

Garza joins a growing group of players with Texas connections on the San Jose Earthquakes, especially in what is becoming a strongly flavored Lone Star midfield — Anthony Ampaipitakwong, last year’s second round selection out of Akron University, hails from Carrollton and Shea Salinas, returning to the team after stops in Philadelphia and Vancouver, was born in Lubbock. Garza spoke about making his return to California and getting a chance to meet up with his fellow Texans.

“It’s great to be going back to Cali,” said Garza with obvious excitement. “It’s perfect weather out there in San Jose and I can’t wait. I know Ampai a little bit, so it will be fun to see him again and play with him. And of course Shea as well, I just can’t wait to get started.”

Garza won’t have long to wait, as the Earthquakes open preseason training camp this Monday, January 16, for fitness testing. The season opener for San Jose is scheduled for March 10 against the visiting New England Revolution.

For a look at the strategy that went into the selection of Garza, coach Yallop explained the team's draft day decisions.