Ask any Earthquakes fan to name a ball player who was at the top of his game, who wore the number eight on his uniform and was an all-star with golden trophies, and they’d surely name their team’s star forward Chris Wondolowski.  Mention also that his father and younger brother both coached the game, that he was a local hero getting ready to play in a new stadium, and that in his down time he loved to hit the hardwood court for a little basketball, they’d reach for their wallet and place their bet confidently on Wondo.

Not so fast – with intentionally ambiguous grammar, I just shared the life and storied career of baseball hall of famer Cal Ripken Jr., an all-star infielder who played his entire career with the Baltimore Orioles.  All of the facts I listed above are true for both men.  Except that last one:  Cal was an Oriole for his entire career.  San Jose fans hope that all of these ‘Ripdolowski’ coincidences will mean Wondo will be a lifetime Quake, but in light of recent rumors, I’ve acquired a niggling unease that we might not see him in our blue and black for the rest of his career.  And yes, for the purposes of my argument, I have chosen to ignore (and forgive) Chris’s brief excursion to Houston.  The 2005 ‘team kidnapping’ doesn't count – technically he was temporarily a ‘zombie’ Quake. 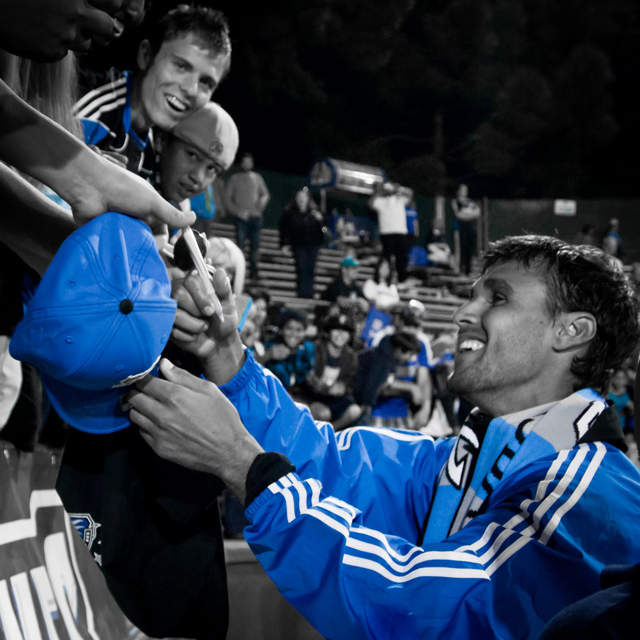 I learned all about Cal Ripken Jr. when I lived in Baltimore during the most productive seasons of his career.  Fresh off the plane at BWI airport  in 1990, I didn’t fully appreciate that I had arrived at such a pivotal moment in Charm City’s sporting history – ground had just been broken at Camden Yards, and the indefatigable Cal was in the midst of his record breaking consecutive game streak.  A couple of years later, the stadium opened on April 6, 1992, hot on the heels of Cal’s 1991 Gold Glove winning and MVP season.  Does that scenario sound familiar - golden trophy, new stadium?  Invariably covered in cinnamon sugar from Uncle Teddy’s pretzels, I witnessed Cal Ripken Jr. equal, and then surpass, Lou Gehrig’s 2131 consecutive game streak, as well as an All Star game and two AL pennant series.  When I moved to California in 1997, just as Cal took his number eight jersey from short to third base, I left my last game dabbing a tear from my eye and with a feeling that Camden Yards was The House That Cal Built; it’s a truly beautiful stadium.

Meanwhile, during that same summer of ‘97, a teenager from Danville was winning his own baseball championship. Fourteen year old Chris Wondolowski, himself an outstanding middle infielder, started at second base for the Danville Rockies baseball team that won the 1997 PONY League World Series.  This was the second similarity that I had noticed between the lives of Chris and Cal Ripken Jr. – first there was the coincidence of their number eight jerseys, then there were their World Series rings; Cal won his in his rookie year of 1983.

Cal Ripken Jr. acquired the number eight on his very first day as a major leaguer, when it was assigned by the club house manager.  Cal didn’t mind,“the number made no difference to me.  I just wanted a big league jersey with any number at all”.  Chris, on the other hand, always wanted the number eight since his U9 days.  In a recent conversation with CLS, Chris’s brother Steve said that family conversations always focused on whether number eight would be available for Chris, conversations that began so long ago he couldn’t really remember why.  Steve did say that Cal Ripken Jr. was one of Chris’s favorite baseball players growing up; it’s unclear if his number eight factored into Chris’s original choice, but as a fan of both players I’d like to believe so.

Chris’s longtime quest for the number eight jersey was stymied when he turned professional.  In Houston he had to play at number seven, coincidentally the number worn by Cal Ripken Sr., and then Cal’s brother Bill in Baltimore.  In 2009, when Chris was traded back to San Jose, number eight was already assigned, so he took his father’s college number, seventeen; John Wondolowski  played at ‘Cal’ (where else?).  Even though the digits one and seven add up to eight, the octo-mojo (to coin a phrase) didn’t fully take effect until number eight suddenly became available before the 2010 season.  That’s when Chris grabbed his favorite number back, and of course scored his way to the Golden Boot – it seems highly unlikely Chris would ever give up the number eight again.

When I started to dig a little deeper, I uncovered many more coincidences in the paths followed by the Ripken and Wondolowski families.  Cal’s younger brother Bill played second base for seven years while Cal played shortstop – Chris and Steve both played for the Houston Dynamo from 2007 to 2009.  Both family patriarchs handed down their coaching skills to their sons: Cal Ripken Sr. managed Cal Jr. and Bill as Orioles (still the only time a father has ever simultaneously managed two sons in MLB) – John Wondolowski coached son Chris from U9 to age 14 and is currently Head Assistant Coach for soccer at San Ramon Valley High School, where he is assisted by Steve.  Steve enthusiastically described how he and Chris have already coached together: a freshman team at SRVHS and a competitive girl’s team while they were in Houston.  Steve already has his foot in the coaching door with the Earthquakes and says of Chris “He’s been doing camps for years and years and I see him jumping right in with an academy”.  Bill Ripken, with Cal, is an established baseball instructor in their “Ripken Baseball” academy – if history repeats itself, then a Wondolowski Soccer academy will surely follow.  Deja vu all over again?

Here’s the final kicker (as it were) – and this is when I got a little freaked out by the sudden apparition of The Twilight Zone theme in my head – the Ripkens love soccer.  In Cal Jr’s autobiography The Only Way I Know, he described how Cal Senior actually knew more about him as a teenage soccer player than as a baseball player – “Soccer was the winter game for both of us”.  Cal Ripken Sr. loved the game and loved to coach the game “During the World Cup, especially, it [was] easy to get Senior to analyze the play of the midfielders with exactly the same precision and passion with which he analyze[d] center fielders”.

All of these similarities aside, Chris Wondolowski couldn’t have a better role model than Cal Ripken Jr. Cal was the franchise player when the Baltimore Orioles crossed town from a decrepit football (the throw-ball kind) stadium to the purpose-built brick edifice of Camden Yards.  Cal’s loyalty to his city and its team, and his community work after he retired has earned him such reverence from the club that his number eight jersey was retired – there’s a fair chance that if you call out ‘Hey Cal’ in Baltimore’s Inner Harbor, approximately twelve teenage boys, all sons of Ripken fans, will look up from their crab cake sandwiches.

It’s my opinion that the San Jose Earthquakes couldn’t have a finer candidate for their franchise player than Chris Wondolowski,  someone around whom the team can be built as we prepare to cross the Caltrain tracks to our own new stadium.  Chris has just had a stellar two seasons on the pitch, and off the field he already conducts himself with the same affable, unselfishness as Ripken.  He has a strong sense of community spirit, recognized last season with a nomination for MLS W.O.R.K.S Humanitarian of the Year for his work with Street Soccer USA.  After each home game, drenched in sweat, he jogs over to commune with the 1906 Ultras (almost as sweaty after a close game) – he then circles the pitch, patiently signing autographs for any fan that wants one.  The countless numbers of small hands thrusting last season’s Wondo bobble head, or their favorite picture through the rails for Chris to sign after the game show me that he also has the heart of the younger Quakes fans – just as Ripken had in Baltimore.

Will Wondo Stay in San Jose?

With the new stadium closer than ever, I’ve spent a lot of time this off-season wondering if I will be lucky enough to see another number eight inaugurate a new ball field.  I figure on some of my own octo-mojo when I pull out my Magic 8-ball, but it is disappointingly non-committal with its response to my question: “Reply hazy, try again”.  My heart hopes “it is decidedly so”, but when I read recently that Wondo was open to a move to Europe, and about the interest of a couple of Danish teams, some seeds of doubt were planted in my mind.  Wondo is in his prime as a forward and is coming off two MLS seasons as the league’s top scorer – he also made the MLS Best XI, he was Soccer America’s highest ranked striker and won the Castrol Index Player of 2011.  Now that he’s earned a second call up to the US Men’s National Team, his scoring prowess is surely getting noticed by other teams, at home and abroad.  It remains a distinct possibility that one day he could be lured away from San Jose.

Cal Ripken Jr. chose to stay in Baltimore for his entire career,  presumably declining lucrative offers from larger market teams.  In my vivid imagination, Quakes fans would enlist Cal Ripken Jr to help persuade Chris to stay with the Quakes. In what is probably the final coincidence, it turns out that both players gravitated towards basketball as their favorite sport outside their chosen profession – Wondo’s MLS biography states “If not playing soccer, he would play basketball because it has a lot of similarities to soccer”, while Cal plays basketball avidly enough to have built his own court beside his house.  So, I envisage Cal battling Chris during a little one on one on the court at Cal’s home.  During the Gatorade breaks, Cal would extol the values of family stability, loyal fan support, and opportunities to serve his own community – all valid reasons to remain with a home town team – they might even argue whose bobble head is more realistic.  Mind you, given the similarity of the two families’ histories, it’s equally possible they would have the same discussion at half-time of a Ripken versus Wondolowski five-a-side contest or between innings of a family softball game.  In my book, the Ripkens win the softball, the Wondos win the soccer – the basketball outcome, like our hope for Wondo’s future, is still up in the air.