Yet Another Offside Controversy

Share All sharing options for: Yet Another Offside Controversy

The offside rule: the gift that keeps on giving on the field of soccer controversy.  The two words ‘offside’ and ‘controversy’ are often found side by side, just as often as Robert Jonas and El Tonayense taco truck.  Nothing, but nothing, provokes an emotional response deep inside the soul of a soccer fan quite like a good, solid controversial offside call - especially when it’s called at just the right (or wrong) moment of a game.

Controversial offside calls are universal and have been whistled from rec league quagmires to the lush fields of the World Cup; every team in the history of soccer has been on the receiving end of an egregious call.  Officials, driven to distraction by vuvuzelas perhaps in the 2010 World Cup, allowed Carlos Tevez's first goal for Argentina against Mexico, despite being miles offside.  Quakes fans cheered when arch rivals LA Galaxy were denied a goal in the 2011 MLS Cup Final - I’m sure you have your own favorite example.

For the casual fan the offside rule is often misunderstood, and on more than one occasion I have found my British accent a cue for intense cross-examination by soccer moms and dads – the concept of scoring goals is obvious, but they believe it takes years of soccer watching to firmly grasp the offside rule. The official definition of offside is succinctly described by FIFA, with the offside position defined in eighty-one words and the offence in an additional fifty-seven words.  However, the offside rule is hard to explain convincingly, and so it’s often perceived as the benchmark of soccer knowledge (akin to the infield fly rule in baseball).

Both John Cleese and The Guardian have demonstrated that the average man on the street finds it surprisingly difficult to explain the offside rule, and appears dazed and confused without some kind of illustrative gadget.  In England, the concept is  easily explained in the greasy spoon over cup of tea and a chip butty using salt & pepper pots with the ketchup representing the goalie, or at the pub with empty glasses and beer mats.

Now, British fans have a new tool at their disposal – a recently designed fifty pence (about seventy-five cents) coin, minted to celebrate the sports of the 2012 Olympics in Great Britain.  The seven sided coin has captured the greatest talking point in soccer with an illustration depicting offside on the reverse.  The illustration was designed by Neil Wolfson, who used a stunningly simple representation of a midfielder (apparently Triangle FC) about to pass to one of two team-mates: one player is marked as offside, and the second, level with the defender (from Square United) is  not offside. 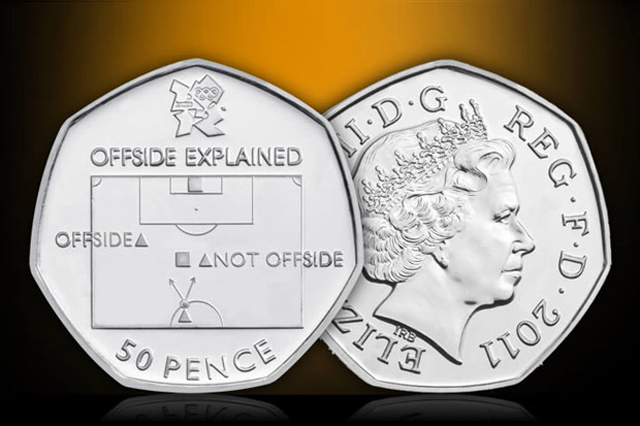 Ironically, the coin’s design itself has caused its own controversy – referees wrapped in wet blankets exploited immutable laws of physics and wielded the negative energy of controversy claiming that the design of the coin was  incorrect.  They put forward the argument that the diagram illustrates the offside law as it was until 1995, which has since been superseded by a revision that means any player in an offside position when the ball is played is no longer automatically penalised – whatever.

Designer Wolfson, a sports journalist, cheerfully countered the referees’ argument that the design was meant to demonstrate the offside position – not the offside offense.  "The coin simply states that the player is 'offside' – which is true, irrespective of whether or not an 'offside offence' results...so I simply don't agree with [referee] Mal Davies’s objection on the basis that he refers to the 'offside offence', despite the coin having no such reference.  I just hope Mal doesn't book me for showing dissent."  I guess we shouldn’t be surprised that referees would focus on the offence rather than the position, it’s just one more occasion that they’ve been witnessed controlling the puppet strings of controversy.

Of course, on the other side of the coin,  it’s this very controversy that animates the fans and, to many a publicans’ delight, fuels the heated and lengthy discussions in the pub after the game.  Restaurant profit margins are preserved as table condiments are no longer spilled in complicated reenactments – the new fifty-pence coin can be safely stowed in your back pocket as a compact visual aid to define the offside position should the need arise.

So, what about that other controversy currently on the minds of San Jose fans: Quakes in blue, or Quakes in black? Perhaps we should just flip a coin.