There are myriad ways to enter the Guinness Book of World Records - such as joining the attempt to surpass the number of attendees at a groundbreaking when the San Jose Earthquakes invite 6,000 participants to shovel dirt to kick off construction of their new stadium. 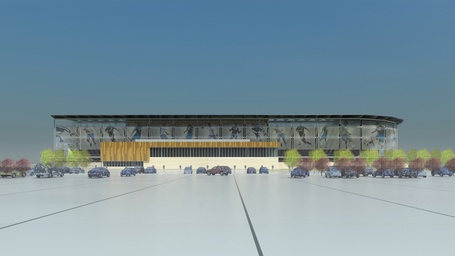 Who wants to be a world record holder? This week Felix Baumgartner joined that exclusive club as he completed the world’s highest parachute jump from 120,000 feet (or 23 miles). He downed a Red Bull, donned his pressure suit and exited what amounted to a giant tin can (he calls it a capsule) hoisted to the stratosphere by helium balloons. Then he plummeted towards earth. He becomes the first person to break the sound barrier in free fall, with nothing but a parachute and the state of New Mexico to break his fall. Groundbreaking stuff indeed; please, please do not try this at home.

If you’re looking to own a less life-threatening world record, then I suggest the groundbreaking ceremony for the new Earthquakes stadium on Coleman Avenue in San Jose. I've always imagined how cool it would be to hold a world record, and I'm looking forward to a much more relaxed attempt when I turn up with my family to join the San Jose Earthquakes organization, a stout representative from the Guinness Book of World Records, and Dave Kaval who wants to "shatter the [existing] 4,532 record"; he's ordered six thousand blue shovels - just to be sure.

The Guinness representative will surely not permit the inclusion of any animals that can dig: gophers, groundhogs, moles and Dutch shepherd dogs should be left at home to dig. Neither will illegal equipment such as back hoes, rocket propelled tunnel boring machines or dynamite be permitted - and hopefully any Bradley armored vehicle ammunition has already been removed from the former FMC site.

Fans will be provided with a shovel sporting the San Jose Earthquakes logo and a blade in Earthquakes blue for our Guinness-mandated two minutes of digging. Some fans have indicated on the Earthquakes Facebook page that they "won’t stop digging until the digging is done". Two minutes digging is enough for me, but what if we all kept digging for the 7,926 miles through to the opposite side of planet Earth? It turns out that we would end up adrift in the Indian Ocean about 1,000 miles southeast of Madagascar.

Random Fact #2: The current Malagasy soccer cup holders are Caisse Nationale de Prevoyance Sociale Sport of Miarinarivo, Madagascar - not a team name that easily lends itself to a supporters’ chant.

Meanwhile, who knew there were so many rules governing the etiquette surrounding groundbreaking ceremonies? The festivities are performed after construction funding is approved, the major participants are usually community leaders, there are speeches with the highest ranking official speaking last - after all this, the groundbreaking takes place using special shovels to commemorate the event. I have my own suggestions for polite and courteous behavior when the shovels are issued: please do not be tempted to play whack-a-mole with the Galaxy fans later in the day, and please do not throw dirt over your shoulder - it’s a hazard to your neighboring diggers, and you also run the risk of injury to yourself.

Random fact #3: 11,500 people a year are injured just shoveling snow - allowing for the extra weight of Coleman Avenue dirt, it's imperative to have good form to protect your back.

So, let’s be careful out there. We've all got a couple of weeks to get in shape, develop our core strength and practice our digging technique. Sturdy footwear is recommended when you turn up on October 21st - and if you haven’t already reserved your shovel you can do so on the San Jose Earthquakes web site here. Personally, I can’t wait - that day we’ll have the groundbreaking ceremony for the new stadium, followed by the last home game of the regular season against the LA Galaxy and 5,000 fans get Ramiro Corrales bobbleheads. October 21st is already shaping up into a great day for Earthquakes fans - and if Wondo scores a brace to tie Roy Lassiter’s season scoring record and the team clinches the Supporter’s Shield too, it will surely go down as one of the greatest days in the team’s history. In the meantime, I have a not entirely unexpected thirst for a pint of Guinness. Cheers.