San Jose Earthquakes live on the edge with comeback penchant

Share All sharing options for: San Jose Earthquakes live on the edge with comeback penchant 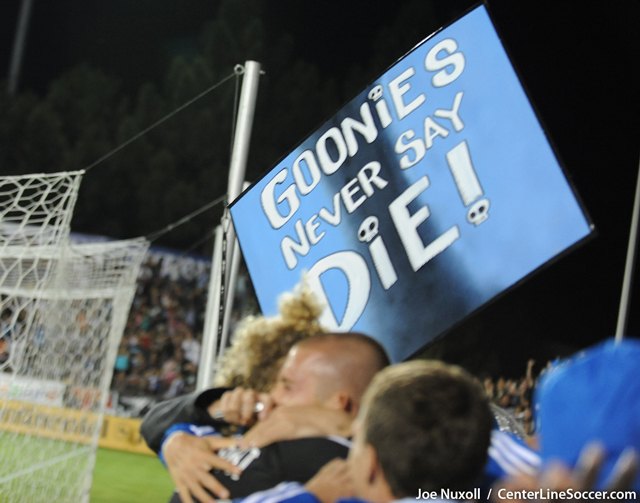 As Steven Lenhart slam-dunked a header over Daniel Hernandez to give the San Jose Earthquakes another stoppage time goal — their ninth of the season — and a 3-3 draw against visiting FC Dallas, the raucous Buck Shaw Stadium capacity crowd celebrated another thrilling comeback by the “never say die” Goonies. The season-long unbeaten streak at The Buck would last another evening, and the team would creep ever so close to a guaranteed top finish in the Western Conference. Supporters reveled in the euphoric atmosphere.

But a different message was being shared in the Earthquakes locker room. While fans in the stands had come to expect the improbable comebacks, the players knew they were living on a knife’s edge in terms of willing the results their way. Surprise had given way to belief that the comebacks continued, but disappointment was creeping in at the team’s inability to put teams away.

“It keeps happening,” said a disconsolate Jon Busch, “but we can’t keep putting ourselves in these holes. Eventually your luck runs out.”

While that luck — and pluck — in pulling out results has been the norm at Buck Shaw, the opportunity to secure a home win was lost against playoff-hungry FC Dallas. The postseason atmosphere was palpable, but if the Earthquakes fancy themselves an MLS Cup favorite, opponents like Dallas cannot be underestimated.

“As we get down late in the season, everyone needs as many points as possible,” said an irritated Chris Wondolowski. “We’re trying to chase the Supporters’ Shield, they’re trying to get into the playoffs, and that leads to battles and a bit of an open game. Sometimes a tie isn’t as good as you want, but sometimes you just have to take it. I’m a bit frustrated by it, but given the circumstances, we’ll take it.”

The Earthquakes offense continued to shine, and the franchise record for goals scored in a season was pushed three goals higher. However, the typical stingy home side defense that has been on display at The Buck all season, one that was averaging just a lone goal allowed per match, did not materialize on the night, and Busch was not happy about it.

“When we get three goals at home, we should be winning those games,” he explained. “Not to bring a negative into it, but we’ll definitely take the point because that could be huge at the end of it all. But, I don’t know how any more times we can go to the well.”

The way the team plays — going directly at the opponent and pressing high up the field — leaves the defense vulnerable to counterattacks, but that hasn’t been an open concern during their ascension to top of the Western Conference standings. Rather than play coy and defensively, the 2012 Earthquakes take their lumps and then outhit teams in the end. At home, that strategy has worked out so far, but on the road, San Jose has dropped some games when the offense wasn’t able to claw back into it. Tough losses at Sporting Kansas City, Portland, and Vancouver illustrated the team’s inability to always come back from late deficits. But Buck Shaw was different, or so it seemed. Now, with draws in their last two matches at home, are those tactics starting to show some frailty?

“If we are home or away, we go out there with the expectation of getting three points and the belief that we can get three points,” said Wondolowski. “We go out there and try to get wins, so I’m a little frustrated, but sometimes you can live with it. I still think we have the momentum, and it’s not one of those things where we are going to hang our heads.”

The Earthquakes are certainly not going to panic over a pair of lost opportunities to score home wins — after all, they still sit three points ahead of Sporting Kansas City in the race for the Supporters’ Shield. However, the team does realize that dropping points unnecessarily will not help their efforts to finish the season as the best team in the league.

“We were disappointed with the result against Portland,” said a confident Alan Gordon, “but the point kept us moving in the right direction. After that, we went into Seattle and got the win, so ties can mean a lot when to add them to wins. If we follow this up with a loss, it is disappointing and we are going to let it start slipping. We’ve got to give it our best effort and start rallying together and continue to do what we’ve been doing and go into other team’s stadiums and win.”

Whether on the road or at home, the Earthquakes proclivity for late game heroics might lead to pandemonium in the grandstands, but it does not provide a sense of security that positive results are an inevitability. With three games remaining in the regular season, San Jose needs to keep their concentration on both sides of the ball and string together three quality results. Do so, and the lingering doubts that their propensity for comebacks masks a more troubling issue of a lack of a killer instinct will dissipate.