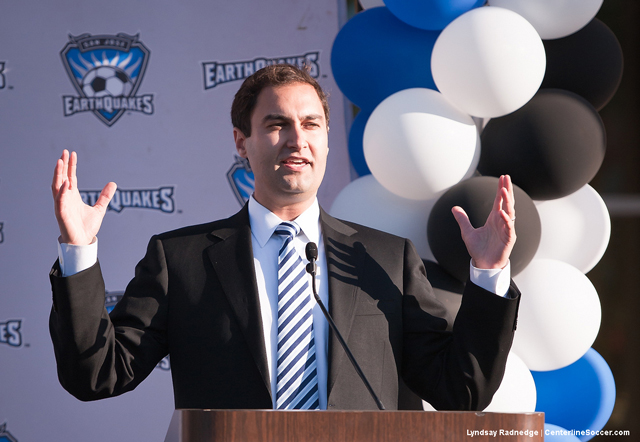 The San Jose Earthquakes organization has waited for a moment like this weekend to mark the revival of the franchise in the ever growing American soccer landscape. In its fifth year since returning to MLS in 2008 as an expansion side after the former team was relocated to Houston, the Earthquakes are finding unparalleled success on and off the field. On Sunday, the Quakes will start the day with a ceremony marking the groundbreaking of their new stadium and finish the day with a California Clasico match with rival LA Galaxy.

Leading the way for the Earthquakes, as he has since he joined the organization two years ago this month, is team president Dave Kaval. A former founder of the minor league baseball circuit the Golden Baseball League, Kaval has dedicated himself to “association football” and has grown into the role as one of the most influential young leaders in MLS.

A very hands-on front office executive, Kaval is a frequent observer of the team’s training sessions as well as other off the field functions. Earlier this week, standing just yards away from the site where the new Earthquakes stadium will rise and with jackhammers and wrecking balls working non-stop in the background, Kaval entertained a small collection of reporters whom had sought him out to address the groundbreaking and the prospect that the ceremony could set a new Guinness World Record. He was first asked if he was excited for the event.

“I’ve been excited since we announced it, and I’m still excited now,” said Kaval. “Obviously we are up over 5,500 people registered. All the blue shovels are accounted for, so if people still want to come they are more than welcome, but they need to bring their own shovels. I’ve been getting emails from folks that are throwing shovels in their trunks and looking forward to coming out on Sunday. Basically, going to church in the morning and coming out and being a part of our groundbreaking and then checking the game out. It’s going to be a really special day for the team and the community and we can’t wait.”

The team has had a number of symbolic moments along the path to getting the stadium to this point, but how does Sunday’s event compare?

“Well, this is the groundbreaking,” said Kaval. “This is the event. It sets the tone and puts us off on a whole other trajectory, both symbolically in terms of breaking the ground and starting the stadium, but also in terms of where our club is, and really an inflection point to take us from a quasi-minor league team to really the big leagues. And I think that is a really amazing accomplishment for our ownership group, our front office, and our team, everyone together that has been a part of this journey that started in 1974. It’s really a rewarding and exciting moment.”

The idea of shovels in the ground is often used as a metaphor for the shift from dream to reality for such stadium building projects. Is this purely a ceremonial start to construction, or will the stadium start to take form in the immediate time following Sunday’s ceremony?

“Things are going right now, as you can see,” explained Kaval. “The pre-work is already happening and we already have some of the permits in place to do that. Obviously, the design isn’t completely done, and we don’t have all the construction documents done, but that is going to happen over the next several months. We have a schedule that will open the stadium in 2014 for that season, our first season in the new stadium. That’s all on target, and that’s what we’re shooting for, and that’s what we work for every day.”

The construction of the new stadium is sure to be a huge undertaking, so has any consideration been made that the legion of blue shovels could be enlisted to come out after Sunday and help move the process along?

“Well, I’m going to tell you right now,” laughed Kaval, “I know we have the type of fan-base that would do it. So if they needed to, like building the pyramids, they would probably be there. But, no, we have a great plan, we have a great partnership with Devcon and 360, who are designing it, to get everything built on-time and done in the right way, so we are very excited about it.”

The announcement of the groundbreaking ceremony came back in late August, and the date chosen was clearly done to pair the event with the LA Galaxy match being played later that day. But did you in any way imagine when you were putting this day together, with the Galaxy now looking like a possible playoff opponent, how important a soccer day it would become?

“Oh, it is,” said Kaval. “Sometimes you plan for these types of things are you don’t know how they are going to turn out, and many times the Quakes have been on the bad end and had some bad luck. I think the soccer gods are out there, and they are making it right a little bit, because the team is obviously performing at a high level and we now have the ability to clinch the Supporters’ Shield on the same day we break ground on our new stadium is really just a momentous occasion, and one that is almost hard to describe how exciting that it.”

You were brought in to the organization two years ago to get this stadium going. Have you looked back at the journey to getting to this point, and have you been able to reflect on the accomplishment?

“I’ve been mostly focused just on getting things done, so it hasn’t been an introspective evaluation,” explained Kaval. “I wake up every day focused on making sure the team is going to compete at the highest level and we are going to get our stadium built and completed on time. So those are my missions, and they’ve been my missions since I started. We’ve had ups and downs and things that have been good and bad. But on the whole, I think we have had a successful run over the last two years to position the team as one of the most successful in the league on the pitch. And also finalizing the financing, getting the design done, getting the permitting done, dealing with all the hoops we had to jump through and all the issues we had with the appeal of the permit, and getting to point where we are breaking ground this week. It is very rewarding to think about where we have come from and where we are, but by the same token there is still a long way to go. I sometimes wake up in the middle of the night with things churning through my head to make sure we get things accomplished on a going forward basis. That is really my priority.”

You in no way can be labeled as a check off the boxes kind of guy, not with the flair for the spectacular you have displayed with your attempt to set a Guinness World Record for a groundbreaking ceremony this Sunday and holding Lenhart Wig Night earlier this season as examples. So where does that motivation to provide such a creative spectacle come from?

“I spent almost ten years running a professional minor league baseball organization,” shared Kaval, “and I will say, as part of that, to break through and in order to create publicity and kind of survive in these larger media markets, we had to be very creative. I think the time there, and having guys like Rickey Henderson and Jose Canseco, and giving away a funeral, and doing all sorts of crazy stuff was really a great learning experience for me personally to come up with some of these ideas and understand how to press those buttons and have that flair for the dramatic in a way that creates moments that people will remember their entire lives. Because that’s the kind of thing for this Sunday, this is one of those things where not only what happens on the field, but also all the pomp and circumstance, and being involved in participating in actually building the stadium and digging the ground. This is something people will tell their grandkids about. These are the types of events I like to be a part of because the are truly historic and they such an impact, not only for myself, the team, and the organization, but also for the entire community which is really why we do this and a big reason why we are successful.”

With nearly 6000 blue shovels to distribute to fans willing to come out and dig already accounted for, and nearby Lowe’s likely to sell-out of shovels due to extra demand, Sunday’s event is guaranteed to be interactive. What other dignitaries are expected in attendance and what should people be prepared to experience at the ceremony?

“Yes, we have invited the entire San Jose city council, and the mayor Chuck Reed is going to speak,” revealed Kaval. “Councilman Sam Liccardo, who has been instrumental in making sure this project has been a success, is also going to speak. The league commissioner Don Garber is flying in to participate in the festivities. Our owners will be there, I’ll be there, everyone will be there. It’s a celebration beyond even hard-core fans and supporters, it’s for everyone. We want to be very inclusive and have everyone there having a really fun time. When everyone is digging for two minutes, I want people to enjoy it. It’s a joyful occasion to celebrate this and to be able to participate and not just sit there and listen to a bunch of boring speeches and instead to get down and actually dig and be a part of it and get your shovel that you can take home is really all about the ethos of this team and what this team is to the community and to soccer in America.”

So much more than a camera opportunity, the San Jose Earthquakes new stadium groundbreaking event promises to be a significant moment in the history of soccer in San Jose, and fans are encouraged to arrive early and come prepared to dig their way to a new Guinness World Record.