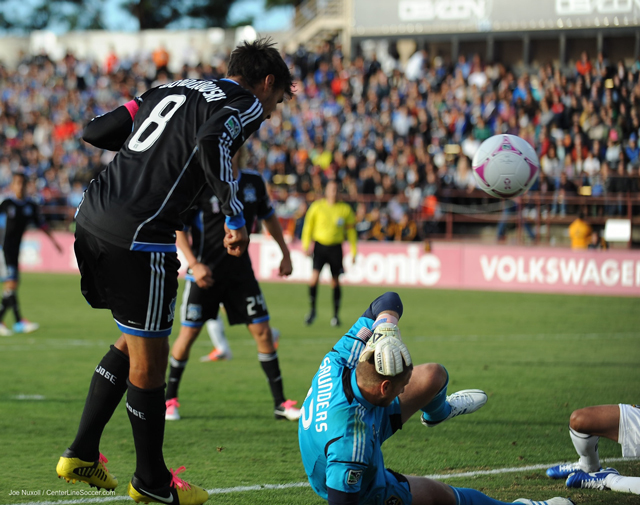 (Santa Clara) Chris Wondolowski inched closer to the MLS single season goal scoring record Sunday, heading home a Marvin Chavez corner kick late in the second half to lift his total for the year to 26, and give the San Jose Earthquakes a 2-2 tie with arch-rival Los Angeles.

With one game left in the regular season, Wondolowski is one shy of Roy Lassiter’s mark of 27, a record set back in the league’s inaugural season of 1996.

This was a Big Day, if not a big game, for San Jose. By kickoff, the Earthquakes had already won the 2012 Supporters Shield (thanks to KC’s tie at NY the night before) and broken a world record for most participants in a groundbreaking ceremony (as over 6,000 fans came out early Sunday to help get things started on the new stadium project). All there was left for San Jose to play for was Chris Wondolowski’s bid to set a new MLS single season scoring record.

“It was an emotional day for us,” coach Frank Yallop said. “We were a little flat in the first half, I don’t think we had a shot on goal. But we showed spirit to come back twice to tie the game, and we could’ve nicked it at the end.”

San Jose brought most of their usual starting 11, missing only Jason Hernandez, who was forced to sit out the match due to yellow card accumulation. Justin Morrow moved into the middle of the Earthquakes back line, with Ramiro Corrales stepping in at left back.

Landon Donovan missed the match for LA, nursing a knee bone bruise, and David Beckham was also given the day off by Bruce Arena. Still, the Galaxy created chances throughout the first half.

Centerline Soccer photo gallery from the match by Joe Nuxoll

Nine minutes in, Juninho slipped a pass through the Earthquakes back line to send Christian Wilhelmsson in alone on goal. Wilhelmsson was able to touch it past Jon Busch but his shot rolled inches wide of the right upright.

Robbie Keane set up Edson Buddle on a similar play in the 22nd minute, forcing Jon Busch to come off his line to snuff out the chance. Five minutes later, Buddle returned the favor, setting up Keane for an open shot from 10 yards out. Again Busch was up to the task, making a point blank save.

Wondolowski did not get a shot off during the opening half, but after intermission he came out firing. Within five minutes after the restart, Wondolowski twice pinged shots off the right upright, finding the woodwork with a 20 yard blast, then again with a header off a corner kick.

All the scoring came in a 15 minute span midway through the second half. LA started things off with a goal just before the hour mark, a play that began with Edson Buddle sending in a cross from the left wing that deflected off Christian Wilhelmsson. When Justin Morrow couldn’t handle the loose ball, Keane pounced, scoring from close range for his 16th goal of the year.

Marvin Chavez evened the score for San Jose just a couple minutes later, curling a 25 yard free kick over the defensive wall and inside the left post for his 3rd goal this season.

Wondolowski then had another golden opportunity in the 65th minute, as Steven Lenhart headed a pass that sent Wondolowski in alone on goal. Josh Saunders came out to meet him near the top of the penalty area, and denied Wondolowski’s left footed effort.

LA went back on top in the 69th minute. From the right sideline, Sean Franklin drove in a cross, and Edson Buddle rose above the defense to head it home from eight yards out.

But again the Earthquakes had a reply. Chris Wondolowski finally got his name on the score sheet in the 74th minute, making a near post run and fighting through a crowd to get on the end of a Marvin Chavez corner kick, heading in his 26th goal of the year.

In a champagne soaked locker room afterwards, Wondolowski said “It’s a season’s worth of celebration, in a day. We’ll have 24 hours of it, and then we have to get back to work, and really focus on our next goal, which is the playoffs and MLS Cup. The fact that we finished the best in the regular season says a lot about this team. It’s a hard thing to do. I’m proud of these guys.”

San Jose travels to Portland to play the Timbers next Saturday, and gives Chris Wondolowski one more chance at adding a scoring record to what has already been a dream season.