And that's why they play the games: a look back at the regular season

Share All sharing options for: And that's why they play the games: a look back at the regular season

Back in January, when the 2012 MLS schedule was released, back when the nights were dark and I couldn't decide if I wanted to drink a hot chocolate or the last of my eggnog, three soccer-starved writers at Center Line Soccer put their heads together and prepared an analysis of how the upcoming San Jose Earthquakes season might pan out. Our expectations were definitely exceeded.

Lisa Erickson, in Dickensian mood, envisioned the best of times and the worst of times. One of her best games was the home opener against the New England Revolution, and she correctly predicted a Quakes win; a 1-0 victory by virtue of Chris Wondolowski’s first goal of his 2012 season. Analyzing the opponents’ schedules prior to their match ups with San Jose, she also correctly predicted the defeats of the Rapids and Real Salt Lake, but the plastic grass of Vancouver stymied the analysis and the Whitecaps were able to defeat the Quakes 2-1.  Scrutinizing some magic seaweed she also wondered if cold weather in the locales of early season opponents might have an effect, but the Quakes shook off the cold temperatures winning three of four in March. The Earthquakes got hot quickly and were off to a terrific start; the new additions to the squad quickly settled in and were performing well. 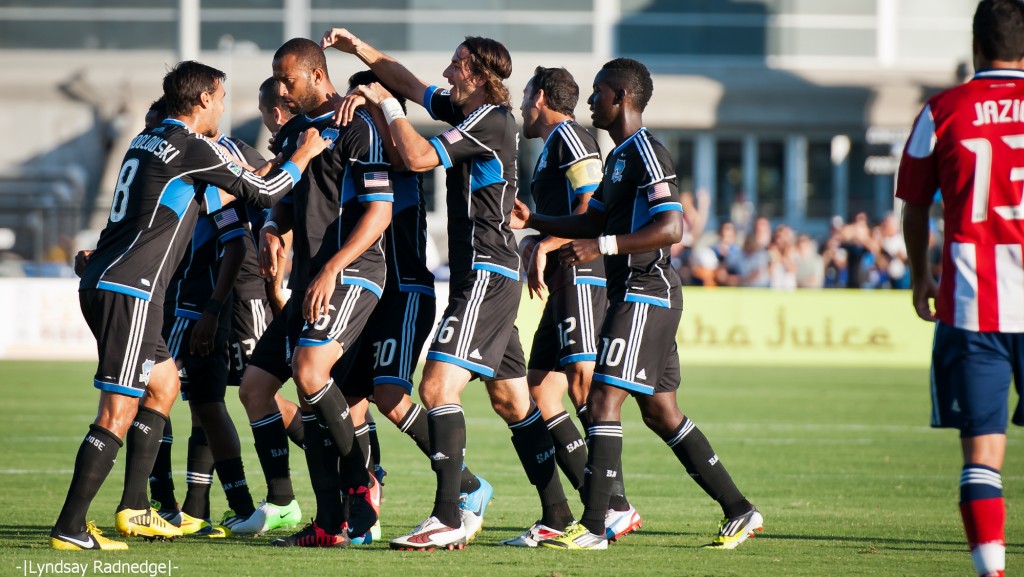 Robert Jonas focused his attention on the return to the unbalanced schedule in 2012 season. Four of the first seven home matches were against teams that did not qualify for the 2011 MLS postseason. For the most part these games were indeed fruitful with four wins and two ties, though the only loss at ‘home’ this season was the 1-0 PK winner at AT&T Park. Buck Shaw stadium became a fortress, and while its defenses were penetrated on occasion, attacks were met with counterattacks and the undefeated record remained intact the entire season. Robert, not going out on any limbs,  rightly predicted that the best game of the year would be the Stanford game, and the remarkable comeback from a 3-1 deficit in front of the packed house was the game that Quakes fans will reflect on with a smile in the off-season  The trip to Portland was his tip for one of the best road trips of the year for a fan – while the atmosphere lived up to expectations, and some Quakes fans covertly embedded in the Timbers Army (I could tell you who, but then I'd have to kill you), it turned out to be a disappointing loss for San Jose.  By the mid-point of the season, evidence of this year’s team camaraderie was building, augmented by the sell-out crowds at Buck Shaw. The Earthquakes were out-performing everyone’s expectations (except perhaps their own) and dispatched three players to the All-Star game against Chelsea – Wondo was John Terry’s nightmare and his run on Roy Lassiter’s single season scoring record was suddenly on everyone’s agenda. 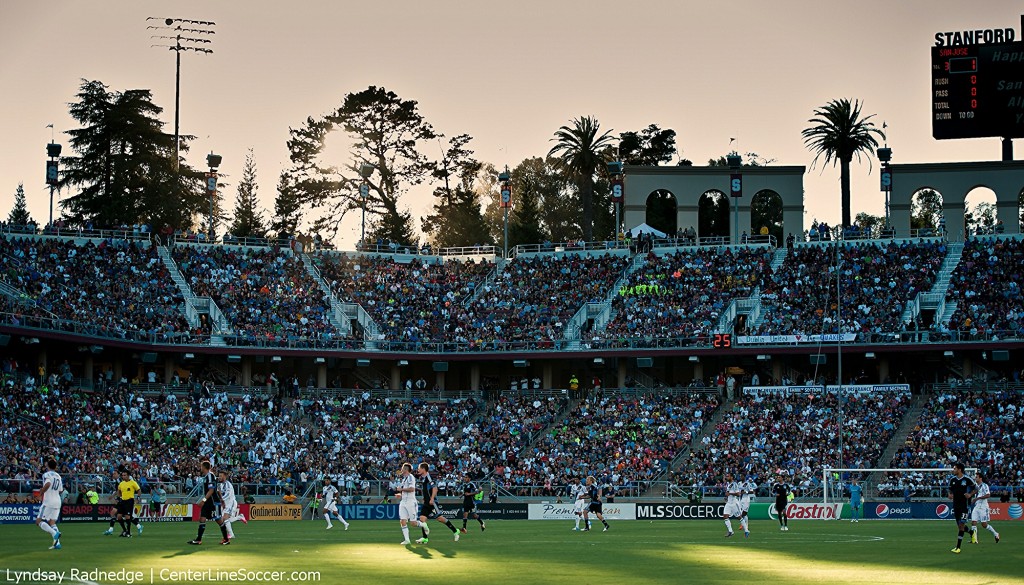 At the start of this season I was still looking for redemption against the LA Galaxy, after the embarrassing 2011 home defeat against the LA Galaxy – yes, that 0-0 tie against a ten man LA squad with Mike Magee in goal. Two wins and a tie against LA have earned redemption in 2012 – Alan Gordon’s last gasp goal at the Home Depot Center, the Stanford comeback and the Goonie-late equalizer at the last home game. At the start of the season I speculated whether the last home game, also against LA, might be the fans’ last at Buck Shaw. While we have to wait one more season on the bleachers, that day was historic anyway – the Quakes had just won the Supporters' Shield, 6,256 blue-shovel-wielding fans turned up for the Guinness world record groundbreaking for the new stadium, and Roy Lassiter was on hand to witness Wondo’s 26th goal of the season, just one goal shy of his own record set in 1996. In contrast, I believed back in January that the East Coast trips would be the hardest to win, but of the four I picked out, the Quakes won two (Toronto and Philadelphia), tied one (New York) and lost only one (Montreal). That defeat at Montreal in August turned out to be the last loss in the Earthquakes regular season – since then it’s been the never say die attitude we've all heard about this season. 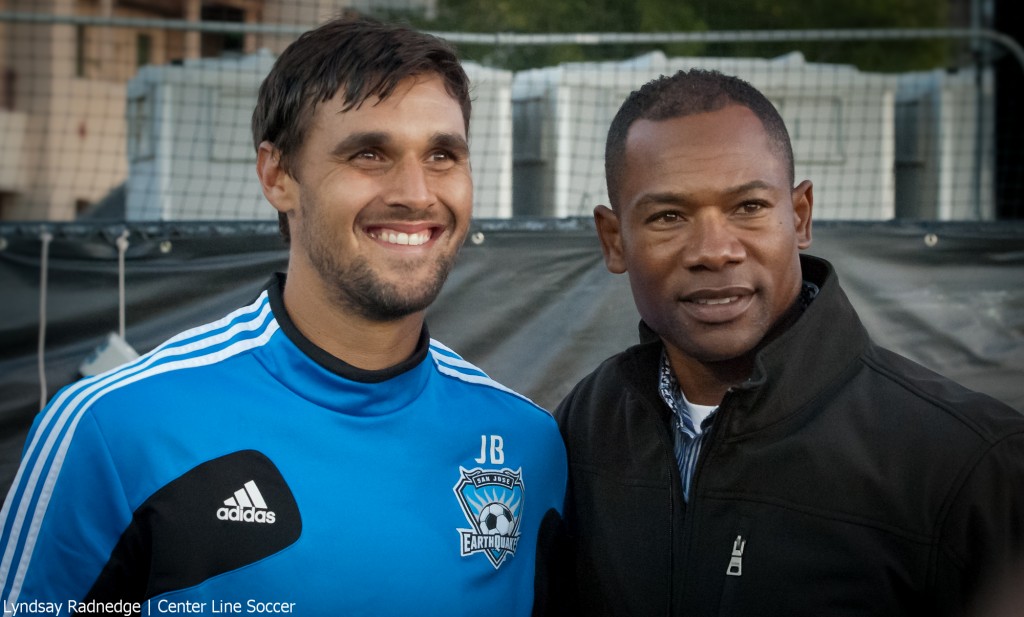 Of course, back in January, we had only a crystal soccer ball through which to view the brand new schedule – we didn't have all the facts that might have led to more accurate prognostications. The Quakes’ 5-0 demolition of Chivas in the preseason Portland Tournament was more prophetic than we realized about who would finish top and bottom in the Western Conference. The eventual return of Simon Dawkins to the Earthquakes squad in March was well received by the fans, and off season acquisitions included veteran defender Victor Bernardez and speedsters Marvin Chavez and Shea Salinas. Then there was the return of Alan Gordon and Steven Lenhart; it became apparent that the Goonie inspired camaraderie of this team was the strongest it’s ever been and undoubtedly crucial to the team’s successful 2012 season. Finally, while everyone hoped that Wondo would continue his prolific scoring rate of the previous two seasons, no-one predicted his record tying run and second golden boot in three seasons – his season’s tally outscored the aforementioned Chivas USA by five goals. CLS founder Jay Hipps tweeted just after the close of the San Jose Earthquakes regular season in Portland: “I imagine if you told Wondo in February that he'd score 27 goals and SJ would win the Supporters' Shield, he'd have been OK w/that” – I believe we’re all okay with that.

This season’s triumphs have made the fans more vocal, with standing ovations at each substitution. The Ultras have excelled at painstaking construction of tifo after inventive tifo. For me, it’s been satisfying to predict, capture and review this exhilarating 2012 San Jose Earthquakes season. Many of the criteria for a successful season have been met, and now we’re all looking forward to the last and, some would say, most significant task at hand: the MLS Cup. The San Jose Earthquakes are well-positioned going into the playoffs, with the Supporters’ Shield ensuring home field advantage through to the MLS Cup Final – will the hard work of the season earn one more piece of silverware? Watch this space and vote Wondo for MVP - the 1906 Ultras approve this message.