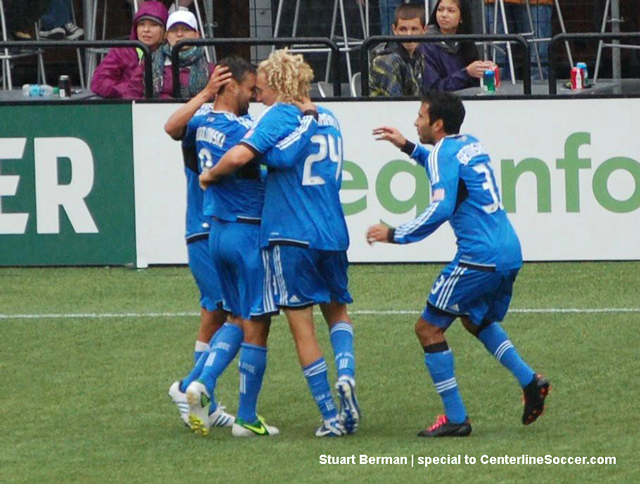 A Chris Wondolowski penalty kick goal was enough to help earn the San Jose Earthquakes a share of the spoils in a 1-1 draw against the Portland Timbers at JELD-WEN Field Saturday night.

Wondolowski finished the regular season with 27 goals, which was enough to match the single season MLS scoring record set by Roy Lassiter in the league’s inaugural season of 1996. The phenomenal season by Wondolowski also earned him his second MLS Golden Boot award as the league’s leading scorer for the second time in three years.

“Amazing,” described Earthquakes head coach Frank Yallop of Wondolowski’s season. “He had a great season from start to finish, scoring in our first game and working hard all year and scoring tonight to finish it off. He has just been phenomenal all year and everyone here is proud of him.”

Wondolowski’s goal raised the team total to 72 for the season, which stands as the third highest total in MLS history, and the most in one season since the LA Galaxy scored 85 goals in 1998. Together with striking partners Steven Lenhart and Alan Gordon, the Earthquakes forward trio amassed 50 goals for the most prolific offense in the league.

“I am happy that I was able to get a goal today and tie the record,” said Wondolowski. “I appreciate all the support from my teammates all year long. They have given me great passes and set up a lot of chances for me and all I have to do is put them away.”

That the goal Wondolowski scored to match Lassiter’s 16 year record came from a penalty kick did not distract from his accomplishment. With a hostile Timbers home crowd jeering him every minute of the way, the Quakes striker made easy work of the spot kick scoring opportunity.

“I had a big smile when I saw the referee point to the spot,” said Wondolowski. “I was ready for it. I picked a corner and just tried to hit it hard. It felt great to score it and be able to celebrate with my teammates.”

Portland Timbers forward Bright Dike was able to equalize for the home side later in the match, but the Earthquakes were pleased to pick up a point on the road in a very hostile stadium. Since an August 18th loss at the Montreal Impact, the Quakes completed their regular season with a 9 game unbeaten streak and the team heads into the MLS playoffs with momentum on its side.

“We had a great regular season and we feel confident going into the playoffs,” said Yallop, “but we know that every game in the playoffs will be tough. A tie was probably a fair result tonight and we played some good football, but we know that we have to keep getting better if we want to win the MLS Cup."

Wearing their all blue road kits, the Earthquakes kicked off the game as a light rain fell in the Rose City. From the opening whistle, it was clear that the San Jose offense was going to have Wondolowski as the focal point. In the first 20 minutes, the team seemed to be pressing to find Wondolowski in the attacking third, but the Portland defense was able to deny the Quakes striker any scoring opportunities.

The Earthquakes finally broke through courtesy of forward Lenhart’s effort on a long ball that forced Timbers goalkeeper Donovan Ricketts to foul the lanky forward inside the area. Referee Mark Geiger did not hesitate in calling a penalty on the ‘keeper, and Wondolowski was quick to retrieve the ball and set it up at the spot with a chance to make MLS history.

As the clock ticked into the 24th minute, Wondolowski calmly took a step toward the ball and sent a low right footed blast that punched into the back of the net. The Earthquakes team MVP celebrated his PK goal with the added enthusiasm of knowing that his 27th goal of the season pulled him level for the MLS single season record.

Wondolowski had a chance to double the Earthquakes lead in the 43rd minute when he found himself behind the defense after collecting a long pass from Justin Morrow. However, with the Quakes forward in the Timbers area, defender David Horst made a sliding tackle to prevent Wondolowski from unleashing a shot on target. The match entered halftime with San Jose holding a 1-0 lead over Portland.

The Timbers started the second stanza strong and kept the Earthquakes pinned in their own half for long stretches of time. The visitors had to rely on counterattacking tactics to advance the ball forward, but those forays into the Portland end were few and far between.

In the 65th minute, the Earthquakes finally had a break go their way, as Rafael Baca collected a ball near midfield and drove the ball ahead to Marvin Chavez near the top of the area. The Honduran winger directed the ball wide left to Wondolowski, and the striker shot low, but Ricketts deflected the ball wide of the far post. A minute later, with San Jose pressed forward, Shea Salinas chipped a crossing pass toward the far post for Wondolowski, but he headed just wide of the target.

Portland resumed their assault on the San Jose defense on the restart, and found an equalizer through Dike in the 67th minute. After Salinas mishandled a loose ball just inside the Earthquakes area, the Timbers collected the turnover and sent in Dike on goal against Jon Busch. The Quakes goalkeeper made a great save on the initial shot from Dike, but the Timbers forward pounced on the rebound and sent a low shot inside the far post to draw Portland level.

Wondolowski continued his pursuit to break Lassiter’s scoring record as the second half continued, but only a long distance effort in the 84th minute gave him a chance to do so. The Earthquakes, who have had a penchant all season for scoring late in games, were unable to break the stalemate. Scorers of 9 goals in stoppage time so far in 2012, the Timbers defense denied the Quakes their 10th such dramatic goal, and the match ended in a 1-1 draw.

San Jose will return home and await the result of the MLS Western Conference wildcard playoff match between the LA Galaxy and Vancouver Whitecaps this Thursday night. The Earthquakes will travel this coming weekend to face the team that wins the wildcard game in the first leg of the conference semifinals.