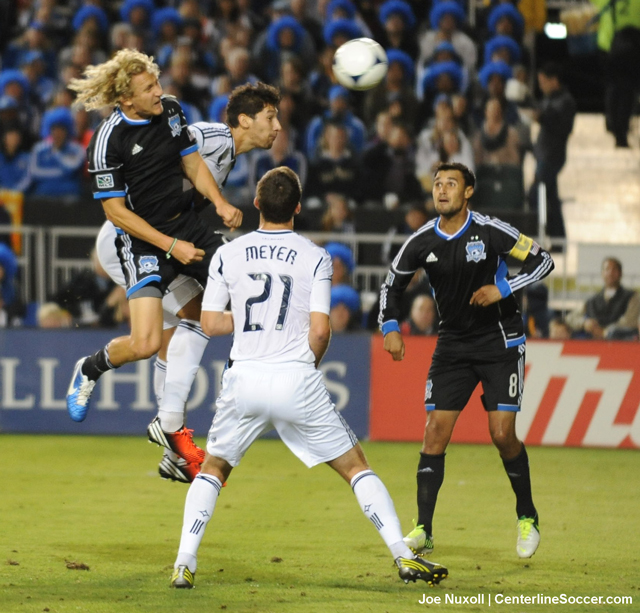 SANTA CLARA, Calif. — After digging themselves a 3-0 hole in the first half to the LA Galaxy, the San Jose Earthquakes did all they could to draw on their “Goonies never say die” attitude, but could only manage one goal in a furious comeback attempt and lost 3-1 on the night and 3-2 on aggregate to exit the MLS Cup playoffs.

“We played pretty well,” said head coach Frank Yallop, “but we were not at the top of our game.”

A brace from Robbie Keane and a series winning goal from Mike Magee were enough to overcome a late goal from Alan Gordon and send Los Angeles forward in their quest for a second consecutive MLS Cup.

“I thought the Galaxy played pretty well tonight offensively,” said Yallop, “but when you lose arguably your best defender, it’s pretty tough and you lose a little chemistry.”

The Earthquakes most important defensive player all season has been centerback Victor Bernardez. After getting banged up Sunday night in the Quakes 1-0 victory at The Home Depot Center, Bernardez ruled himself fit to play in the second leg, but needed to be substituted off in only the 12th minute of the match with a right knee strain.

The exit of Bernardez required an early appearance by third-year defender Ike Opara, and the Galaxy capitalized on the disruption to the defensive unit that had held Los Angeles scoreless in the first leg of the series to the tune of three first half goals.

“You have to be ready for anything,” said Opara. “Was it ideal? No, and it took me awhile to get involved. I got better throughout the game, but it’s tough being our last game of the year.”

The 2012 Supporters’ Shield winning Earthquakes could not capitalize on their season-long unbeaten streak at sold-out Buck Shaw Stadium — an unbeaten streak that stretched back 18 games to August of last season — and at the final whistle collapsed to the grass in defeat to their California Clasico rivals. For a team that has been able to come back on so many occasions this year, they came up short in the biggest game of the season.

“We gave everything we had and I’m proud of everybody,” said Gordon. “This was not something you wanted to happen, and we didn’t want to lose to them, but we’ll be back next year. This will give us a lot of motivation going forward.”

The Galaxy stormed out of the gates looking to put the Quakes defenders under early pressure, and in just the fourth minute Bernardez was forced to concede a free kick 30 yards from goal after earning a yellow card for elbowing Omar Gonzalez. Specialist David Beckham sent the ball well over the target, but was a minute later lining up a 20 yard attempt after another Bernardez foul. This time, the Englishman curled a trademark shot over the wall that forced goalkeeper Jon Busch into a spectacular diving save.

Bernardez was forced from the match in the 12th minute, and the Galaxy soon took advantage of the absence of the Earthquakes Defender of the Year. A miscue in the midfield in the 21st minute allowed Keane to dribble uncontested toward the top of the penalty area. Slow to close down the Ireland international, substitute centerback Opara was too late to prevent Keane from unleashing a strong shot that bounced in off the post to give the Galaxy a 1-0 lead.

Chris Wondolowski had a golden chance to equalize in the 26th minute as the Earthquakes seemed to come to life after conceding the goal to Keane. A low cross into the area was not cleared by Gonzalez, and the ball popped loose to 10 yards from goal. Wondolowski pounced on the opportunity but sent his one-timer skimming over the crossbar.

The Galaxy doubled their advantage in the 34th minute on a counterattack engineered by Landon Donovan. Carrying the ball unimpeded toward the top of the Quakes area, the former San Jose star threaded a ball past Opara and into the path of Keane. He rounded the ‘keeper and calmly slotted in his second goal of the night.

Donovan played provider on the Galaxy’s third goal as a smart give-and-go along the right sideline freed the U.S. international to cut back a cross into the Earthquakes penalty area. Magee, making a direct run from midfield, slotted the pass from Donovan past a helpless Busch to extend the Galaxy lead to 3-0 and stun the capacity Buck Shaw Stadium crowd into silence.

A flourish of scoring chances fell to the Earthquakes in the waning minutes of the first half, including a Marvin Chavez free kick that clanged off the post in the 41st minute, but the home side went into intermission licking their wounds at being down 3-1 on aggregate.

The second half started with San Jose showing more urgency in the attacking third, but the Galaxy back line settled into a solid rhythm of bend but don’t break defending. And even when the Earthquakes sent quality crosses into the area, goalkeeper Josh Saunders was there to secure the ball from danger.

Second half substitutions Shea Salinas and Gordon brought renewed energy to the Earthquakes offense, and the home side began to press forward in ever increasing numbers. In the 83rd minute, the pressure finally paid off, as a weakly cleared corner kick fell to Justin Morrow 30 yards from goal. The Quakes defender volleyed a shot toward goal that Gordon deflected past Saunders and into the goal to cut the Galaxy lead to 3-1.

The Earthquakes nearly scored in stoppage time, a goal that would have leveled the series at 3-3, but Opara skied an uncontested shot over the target with just over a minute left, and the Galaxy successfully ran out the clock to end the Quakes season.