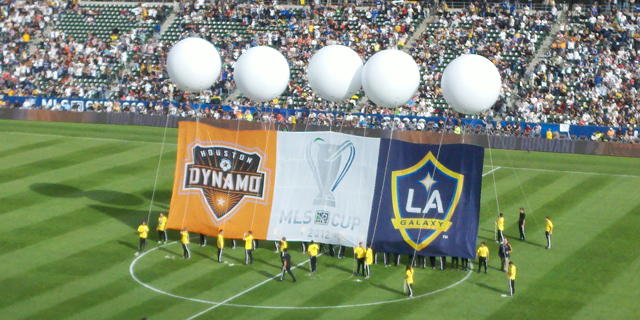 (Carson, CA) Make it two MLS titles in a row for David Beckham and the LA Galaxy, as for the second straight season, his team defeated the Houston Dynamo to capture the MLS Cup.

A first half goal from Dynamo forward Calen Carr was superseded by goals from Omar Gonzalez and Landon Donovan over a 5 minute span early in the second half to put LA 2-1 ahead. A stoppage time penalty kick conversion from Robbie Keane elevated the score to 3-1 and sealed the deal on the Galaxy’s fourth MLS Cup championship.

“It’s obviously fantastic,” said Keane. “It certainly means a lot more this year than it did last year. I felt like I’ve contributed a lot more than last season. I’m delighted. People wrote us off at the start of the season, but there are two halves to the season, and the second half was fantastic. We were the best team by far these last few months and I think we deserved to win it.”

Beckham playing his last game for the Galaxy was instrumental in the win, and when he was substituted off following the third LA goal, the capacity crowd at the Home Depot Center erupted with applause. Capping a six year career in MLS, Beckham celebrated his second championship with the Galaxy.

“I think today was always going to be an emotional day for myself, win or lose,” said Beckham. “Being here for six years, being a part of this team. Coming off was tough, but I enjoyed the win today.”

Despite falling behind a goal, the LA Galaxy defense was superb, and leading the pack was Gonzalez. For his efforts on both sides of the ball, the hulking center back was named the MLS Cup MVP.

“For me winning an MVP is great,” said Gonzalez. “I never thought I would be winning it, so it was pretty emotional for me after the game because at the beginning of the year I did not see myself getting back to this level. Today was very special for me because I know I can go even further now.”

Meanwhile, for the Dynamo it was a bitter pill to swallow, as again the Galaxy got in the way of the franchise winning their third championship. Houston certainly put up a much better fight in this edition compared to last year, but the result was still the same in the end.

“I don’t know if I want to cry or throw up, you know, one of the two,” said Dynamo head coach Dominic Kinnear. “We played well today and gave ourselves a chance to win the game, and that’s the tough part.”

Houston midfielder Brad Davis, who missed last year’s final due to injury, was also devastated by the loss. The MVP runner-up in 2011 arguably had a better year this season, but his team still fell short of the ultimate prize: winning the MLS Cup.

“You have to proud of what we have accomplished this year,” said Davis. “This league is not easy: it’s not easy to get to this game, it’s not easy to win a championship and for us to be back here for a second consecutive year and four times in seven years is a testament to the club, to the coaching staff, to the players that are in this group and you have to look back at the positives. Unfortunately things didn’t go our way this year.”

Both teams came out running from the opening whistle, a clear sign that this year’s final would not be the same as 2011’s one-sided affair. In the 13th minute, Donovan had a golden opportunity to put LA ahead, but his open shot from inside the area was pushed wide of the post. In the 26th minute, overlapping defender Kofi Sarkodie nearly put Houston on top, but his one-on-one with goalkeeper Josh Saunders was pawed over the crossbar. Chances for both sides, but it would be the visitors that struck first.

In the 44th minute, Dynamo defensive midfielder Adam Moffat collected a defensive clearance inside his half and engineered a Houston counterattack. With nearly 30 yards of open space in front on him, Moffat was able to spring Carr with an uncontested pass over the defensive line. The Houston forward raced in on goal with defender Tommy Meyer in hot pursuit, but Carr shook him off to roof a shot past Saunders and shock the Home Depot Center crowd into an uneasy silence.

The second half opened up with the home side Galaxy playing more like the defending MLS Cup champions. A well taken Keane goal was waved off for offside in the 49th minute, but that only served to fire up the Irishman and the rest of his Galaxy attackers.

“At halftime we were fine,” said Galaxy head coach Bruce Arena. “We were just catching our breath, getting a little bit reorganized and understanding that in the first 15 minutes of the second half we had to keep ourselves in the game. I told them at halftime that if we score the first goal, we would win the game and more goals would come.”

In the 60th minute, following a short clearance on a Beckham corner kick deliver, the English superstar hustled into position to keep the play alive and started a passing sequence that sent the ball to Juninho on the right side of the field. The Brazilian took his time to measure a cross and looped a pass to the far post. Gonzalez leapt high above his marker to head the ball back across the goal and past goalkeeper Tally Hall to equalize for LA.

With momentum clearly in their favor, and the capacity crowd roaring their approval, the Galaxy struck within five minutes to take their first lead of the match. A Beckham free kick above the top of the area was floated over the defensive live for the waiting Gonzalez. His header was off target, but a flurry of LA opportunities culminated with a hand ball charged to the Dynamo’s Ricardo Clark, and the Galaxy found themselves with a penalty kick. Donovan calmly slotted a shot past a wrong-footed Hall, and LA was on top of Houston 2-1.

“Sometimes momentum swings come in little increments,” said Kinnear. “They are a good team. We knew that going into the game, so you know they are going to have their moments. You just hope during those moments when they are on top of you that you withstand the pressure and you don’t get scored on. They made the most of their pressure and got some breaks and unfortunately we were off just enough not to get another goal.”

The Dynamo were forced to open up their game throughout the last 30 minutes of the game, but LA were vigilant in their attempts to salt away the game on the counterattack. With time running out and the game moving into stoppage time, the Houston comeback was halted as LA tacked on a third goal via a Keane penalty kick. The Dynamo conceded the game after that, and the Galaxy soon celebrated their second straight MLS Cup win over Houston.

“We made it easy last year because we were exceptional the whole year,” said Beckham. “This year was obviously different because we made it hard for ourselves and didn’t start well. But good teams and good character within teams come good at the right time, and I think we showed that this year. Being successful doesn’t come easy, and I think we proved that this year.”