A friend’s simple question sent Nerdy Gales down to the soccer archives to uncover the origin of the ‘classic number ten’.  Fuzzy math ensues and fuels speculation that two tens might be key to a successful starting eleven.

Geoff Lepper recently wrote that the Quakes have finally found their ‘first legitimate number ten’ with their new signing Colombian Tressor Moreno - let’s welcome Tressor. The San Jose Earthquakes spent their off season searching for a midfield replacement in the event that Simon Dawkins wouldn’t return to the squad in 2012. In actual fact, Dawkins, is returning to the Quakes, so if he keeps his jersey number (ten), there may be a conundrum when the Quakes will venture forth an ‘actual’ number ten and a ‘classic’ number ten (who’s actually wearing #27).

In the article, Frank Yallop was quoted as saying “Simon Dawkins is a good soccer player, but more of a forward. This guy [Moreno] looks to pass the ball. ... It’s the first time we’ve got [a player] who looks to do what number tens do”. His quote prompted a fellow season ticket holder to ask me about the origin of the phrase “classic number ten”. I knew, roughly, that it referred to a midfielder, probably of the attacking variety, but that was based on a distant (and therefore fuzzy) memory of old-fashioned shirt numbers. I grew up watching teams play with the original jersey numbering of one through eleven on the backs of  whichever players trotted out for each game; the goal keeper was number one, and the remaining numbers were designated from the back line, through the midfield to the forwards. Logically then, number ten would belong to someone who was positioned up near the front - that meager knowledge was all I could offer in response.

Obviously, it was time for me to settle down at my laptop with a mug of coffee and hit the Google-verse to fill in my memory gaps (aside: when will there be an MLS Google doodle?). It turns out that the original one through eleven number designation arose from English association football as far back as 1923. Back then, the standard formation from back to front was 2-3-5; I could warm to that offensively-minded formation. Although 2-3-5 seems staggeringly unbalanced, it was conservative compared to England’s 1-1-8 lineup in their first official game against Scotland who employed a more offensively parsimonious 1-2-7. Ironically, perhaps inevitably, that game finished 0-0 - but I digress. In the original 2-3-5 formation there was a squad full of esoteric positions: ‘backs’ and ‘inside’ and ‘outside’ forwards (what I used to call a ‘winger’), with each position numbered as follows: 1 - Goalkeeper, 2 - Right full back, 3 - Left full back, 4 - Right half back, 5 - Center half back, 6 - Left half back, 7 - Outside right, 8 - Inside right, 9 - Center forward, 10 - Inside left, 11 - Outside left.

Gradually, with the evolution of twentieth century soccer, new formations were intelligently designed from the 2-3-5 that involved moving specific positions to different areas of the field. As the formations changed and the players lined up in their new positions, their jersey numbers went with them. For example, the half back was pushed back to become a defender, and so central defenders wearing number five were remnants of the original 2-3-5 system. Historically, when the England national squad played the 4-4-2 formation, they typically lined up four defenders - #2, #5, #6, #3; four midfielders - #7, #4, #10, #11; two forwards - #8, #9. Comparing the two formations in the diagram below, you can see that the half backs, wingers (and the #10) were pulled back from the 2-3-5 to create the 4-4-2. Those attack-minded 19th century English and Scottish forwards would have been shocked and confused - perhaps even a little lonely. 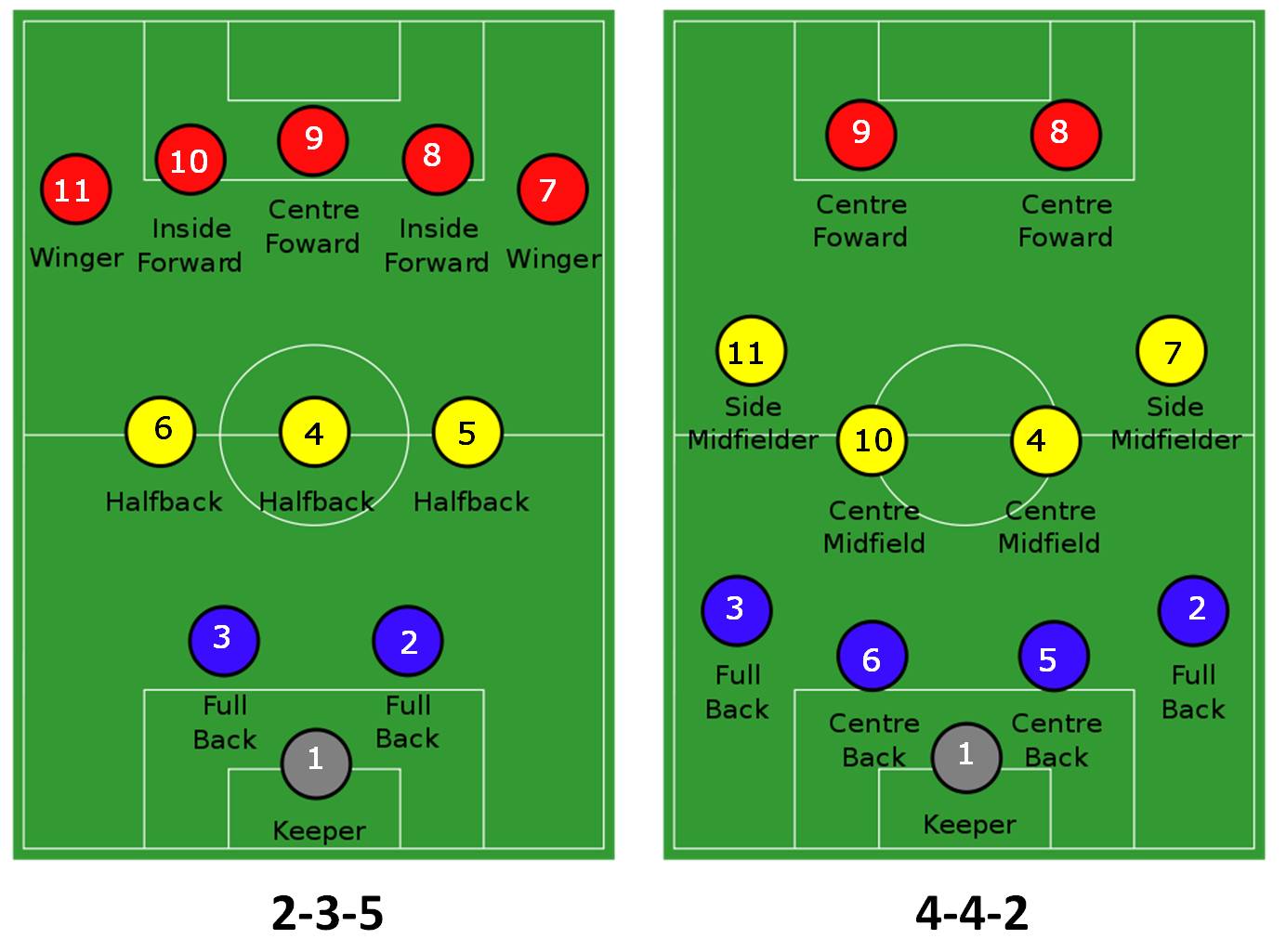 There are myriad other formations some of which are evocatively named: The Danubian Formation (a modified 2-3-5 popular in central Europe in the 1930s), the Christmas Tree formation (4-3-2-1; with its obvious shape), and the Magic Rectangle (4-2-2-2; used, to no avail, by Brazil in the 1998 World Cup final, and which has since been termed ‘suicidal’). The continued designation of  a player’s starting position by his jersey number appears to have gradually become redundant (or perhaps too difficult) with the increasingly esoteric soccer formations. Starting with the 1954 World Cup, each player in a country's 22-man squad wore a specific number for the duration of the tournament. Despite the early success of the approach at the international level, fixed squad numbers didn’t become standard in the FA Premier League until the 1993-94 season, and in the rest of Europe shortly thereafter. While the US Men’s National Team is still subject to this mandated squad numbering system in official tournament play, the new head coach, Jurgen Klinsmann has reverted to the original one through eleven numbering system in friendly games. His reasoning is that identifying each position by its number will inspire competition for starting places on the international squad.  What goes around comes around.

Getting back to that classic number ten - an attacking midfielder sometimes called a trequartista (Italian for three-quarters, denoting his field position), enganche (Spanish for “to hook’; intriguingly also a term used in tango dancing) , or playmaker. His role is to play just behind the forwards, or ‘in the hole’, and create goal scoring opportunities for his team’s strikers, or even himself. The playmaker came into his own with the popularity of 4-4-2, which peaked in the 1990s and early 2000s. All four semi-finalists in Euro 2000 played ‘classic’ number tens in the hole between the opposition defense and midfield: Zidane (France), Totti (Italy), Costa (Portugal) and Bergkamp (Holland); England and Germany did not and they perished early in the tournament. Lately however, the folks at Zonal Marking effectively argue that as the 4-4-2 becomes outdated in Europe, the days of the classic ten are numbered: “Lionel Messi started as a classic Argentine number ten in a central play making position, then became established as a wide forward, now occasionally plays up top.” Furthermore, they argue, as most players are required to become more versatile (playing as strikers, wingers or in the hole), their current role has become more difficult to define; perhaps eventually top players won’t even have favoured positions.

Fortunately for Quakes fans, Simon Dawkins will be playing soccer once again in the blue and black, and the 4-4-2 has not (yet) fallen out of favor. So, if Moreno is the ‘classic’ number ten, and Dawksy stays at the ‘actual’ number ten, I’m concerned about the ramifications for the space-time continuum within the 4-4-2. Will Frank Yallop need to roll out a novel formation to prevent the imminent collapse of the universe? How many (perhaps  all) of the players be out of position if he tries out an old-school, Scottish 1-2-7 (the “Graeme Souness Perm” or “Lenhart” formation - lots going on up top)? As my friend Nigel points out: Most teams only play one number ten, but where can you go from there? When you need that extra push to the playoffs, where is there to go? It looks like the Quakes have gone one better, and their best eleven might have two tens.

Suggested reading: For a straightforward introduction to footy formations check the Wikipedia entry and if that doesn’t satisfy your curiosity, I refer you to the mind-bendingly detailed and exquisitely illustrated match analyses at Zonal Marking.