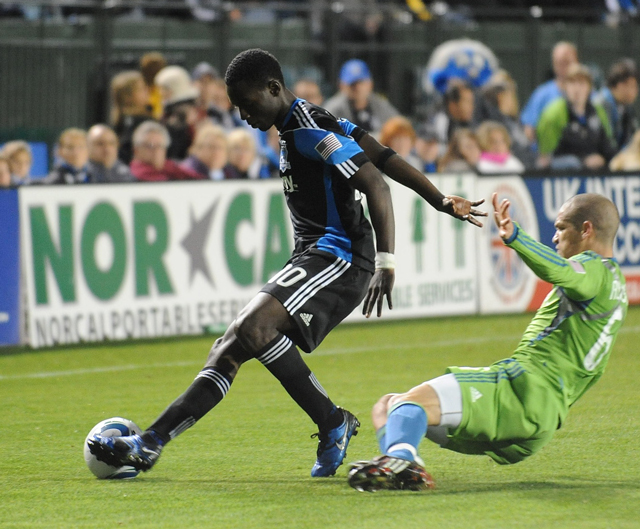 What had been whispered about for week in the South Bay finally became official on Wednesday as the San Jose Earthquakes announced the signing of Simon Dawkins on loan for the 2012 MLS season. Dawkins was a key member of the team last season, when he tallied 6 goals and 2 assists in 26 appearances, and comes back to a San Jose team that has undergone a significant rebuilding so far in the off-season.

The 24-year old is likely to fit in with the 2012 Earthquakes line-up either as a left-sided midfielder or a second forward — two places in the formation where the Tottenham product performed at his best in 2011. Head coach Frank Yallop has called Colombian midfielder Tressor Moreno his preferred starting attacking midfielder in comments earlier this month, but Dawkins could also fill that role if circumstances required a change. If coach Yallop elects to play “small ball” on offense — perhaps by moving big target Steven Lenhart to the bench — Dawkins becomes a logical choice to pair Chris Wondolowski as part of a two forward front line.

Prior to confirmation of Dawkins returning to San Jose, the Earthquakes preseason moves were already shaping up to be the best since the team rejoined MLS in 2008. Partly a result of the Earthquakes organization making a commitment to dramatically improving scouting resources over the current off-season and partly due to the pairing of coach Yallop and general manager John Doyle actively pursuing impact signing to the roster, the Earthquakes have arguably made enough moves to compete in an ever increasingly competitive MLS Western Conference.

Without the safety net afforded post season eligible teams in previous seasons of potentially moving out of conference for the MLS Cup playoffs, 2012 brings an unbalanced regular season schedule and a strict five teams per conference post season format. The Earthquakes will need to finish no lower than fifth in the West to make the playoffs, and will need to navigate a regular season schedule that is weighted with over 70% of their matches against conference foes.

The signing of Dawkins on loan adds tremendously to the Earthquakes depth on offense, but has the team done enough to ensure that the defensive corps is strong enough to fend off the improved offensive forces of their Western Conference opponents? In the center of the back line, San Jose welcomes back third year defender Ike Opara to full health following two difficult seasons for the Generation Adidas signing. Opara has shown no ill effects from the foot surgeries he underwent last summer, and has the potential to step right into the opening match starting XI. Incumbent center back Jason Hernandez is recovering nicely from off-season ankle surgery and will try to hold down his spot in the starting line-up. Finally Honduran international Victor Bernardez brings leadership and ability to the back line that could anchor the Earthquakes defense for 2012 and beyond.

Three quality center backs, but all with issues in the past with injuries that coach Yallop will hope do not present themselves again this season. If any two of the three become unavailable during the season, where does the coach look to on the bench? Young defender Nana Attakora still remains a target to earn a new MLS contract, but the Canadian international seems intent on looking at playing opportunities overseas. In recent preseason matches, coach Yallop has turned to left back Justin Morrow to play the center, and the third year player has shown well. Of the trialists and draft picks that have participated in the preseason so far, former LA Galaxy defender Kyle Davies remains the most talented option to be signed as a center back. Meanwhile, former Earthquakes defender Bobby Burling, who was selected by Montreal in last November’s Expansion Draft, remains in contract limbo as he has not come to an agreement with the Impact on a new deal and potentially could find his way back to San Jose via a trade. Whether the Earthquakes go with an existing member of the roster, or look elsewhere in MLS or beyond, building depth at center back remains as the last task for San Jose’s technical staff this off-season.

Bringing back Dawkins portends an entertaining 2012 Earthquakes season, but further shoring up of the back line will position San Jose to be a serious competitor in the Western Conference playoff chase.