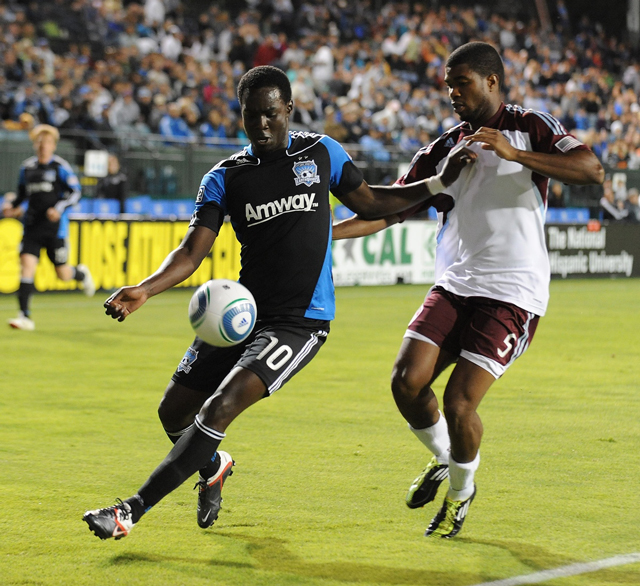 As the protracted “will he/won’t he” affair regarding a return to MLS by Tottenham Hotspur midfielder Simon Dawkins continues, the San Jose Earthquakes remain hopeful that a loan deal can be agreed for a second successive season. In 2011, Dawkins registered six goals and two assists in 26 appearances for the Earthquakes, and he quickly became a fan favorite for his technical skill on the ball and dangerous off-the-ball movement. Earlier today, in a move that puts him one step closer to playing first team soccer for Spurs, Dawkins was added to Tottenham’s 25-man squad list of eligible players for the remainder of the EPL season.

“There’s still a possibility of a loan deal going through, so we’ll continue to look at it and make sure it is the right deal,” said head coach Frank Yallop during a conference call this morning. “We remain hopeful of getting the deal done so Simon can join us.”

With the announcement earlier today that attacking midfielder Tressor Moreno had been signed by the Earthquakes, the focus shifts back onto whether Dawkins would make a return to San Jose. Coach Yallop talked about how Moreno was not a replacement for Dawkins, and that the two players had different roles to play for the Earthquakes.

“Simon Dawkins is a good soccer player, but he is more of a forward,” said Yallop. “Moreno looks to pass the ball. He looks to do the things a No. 10 is supposed to do.”

Dawkins was effective for San Jose as both a left and central midfielder during the 2011 season, but he is likely to play predominately on the wing this time around with Moreno captaining the center. Given the depth of the 2012 Earthquakes roster, the 24-year old Englishman could also act as a back-up to the central midfield starters and be used as a late-game substitute. Without question, securing the services of Dawkins for another season would take the Earthquakes one step closer to keeping up with their MLS Western Conference rivals.

“We have regrouped,” said Yallop. “We have moved players out that were costing us too much on the (salary) cap. I think we’ve used our money wisely and are making sure we address the things we lacked last year. If you look at our current squad, it is better than it has ever been. Other teams are getting better too, so we need to make sure we are moving in the right direction and I think we are.”

Last season, Dawkins joined the Earthquakes on the eve of their season opener against Real Salt Lake. The midfielder made a late-game substitute’s appearance in that wet and rainy contest and nearly paid dividends in narrowly missing out on rescuing a point in what eventually ended as a 1-0 defeat to RSL. Coach Yallop admitted that having Dawkins join the club in a more timely fashion in this preseason would be advantageous, and he outlined the current timeline for talks with Tottenham.

“We’re hoping to get some type of clarity on the situation in the next three, four, five days,” said Yallop. “We should know soon and I don’t think it will take that long to get Simon over here. He is already fit and in training and knowing Simon he’ll slot in with no problems.”

The Earthquakes have two remaining international player slots on their roster following the signing of Moreno, one of which is ostensibly being held for Dawkins. As for filling the last international slot should Dawkins be signed, coach Yallop indicated that out-of-contract defender Nana Attakora was still a possibility to be added to the roster, but that the team may instead elect to keep that slot open into the season.