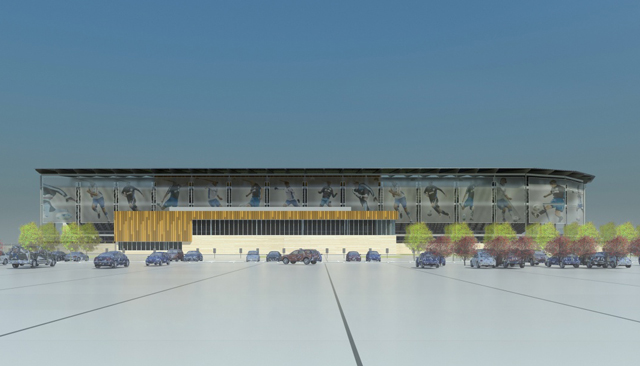 Never have the San Jose Earthquakes been this close to having a stadium they could call their own. As the eyes of soccer supporters across the region and the nation focused squarely on San Jose, the City of San Jose Planning Commission held a final public hearing to determine whether or not to uphold a neighborhood association appeal that would block the already approved planned development land-use permit.

With every seat in a crowded City of San Jose council chamber filled and countless people straining to catch of a glimpse of the proceedings from outside closed glass doors, the Planning Commission voted to reject the appeal, effectively removing the last roadblock in the path to building at long last a soccer specific stadium in San Jose. By a unanimous 6-0 decision, with one abstention, the panel of commissioners cited a lack of evidence brought forth by the Newhall Neighborhood Association to counter noise studies performed for the stadium project Environmental Impact Report.

What was repeatedly referred to by commissioners as “not a vote for soccer, but a vote supporting the EIR” ending a nearly three hour meeting in which numerous people spoke out in favor of denying the neighborhood’s early January appeal. Impassioned speeches by supporters, business owners, trade and commerce leaders, and others affected both emotionally and financially by having the San Jose Earthquakes in the community made up the bulk of the public hearing, but representatives from neighborhoods residing nearby to the proposed new stadium site also had their voices heard.

Given that the burden of proof in the appeal was on the shoulders of those against the stadium, their arguments never reached a level that convinced Planning Commission staffers that the EIR used in the permit should be revisited. In fact, numerous speakers pointed out that the Earthquakes had made numerous concessions during the planning process to appease the concerns of neighbors — including the controversial measure of eliminating the hosting of revenue generating concerts at the new facility.

As the public comments wound down, and closing comments were presented by both sides, Earthquakes owner Lew Wolff made his own plea to the commissioners that upholding the appeal and putting the stadium project back to square one of the planning stage might just be the straw to break the camel’s back for professional soccer in San Jose. His son Keith Wolff echoed his father’s comments and reiterated all the good faith efforts the Earthquakes had made to address the Newhall Neighborhood Association appeal.

While never a threat to quit the process altogether, Wolff intimated that he would not want to go through the process to earn a land-use permit again. “It’s a milestone because we can move ahead on the project. That’s a rarity these days.”

The commissioners’ decision in denying the appeal saved Wolff from having to travel that road, and moments after the large projection screens at the head of the room flashed the votes of the panel, the largely supportive crowd erupted in applause and chants of “Earthquakes!” For observers who have followed soccer in the South Bay since the founding of the NASL version of the Earthquakes in 1974, the announcement was a very long time in coming. After nearly 40 years of professional soccer history in San Jose, supporters were finally on the verge of having a stadium they could call their own.

Following the celebration, as supporters and San Jose Earthquakes officials streamed out of the council chamber, congratulatory hugs and handshakes were shared by all. Earthquakes president David Kaval had the broadest smile of the bunch, as he saw the intense efforts he made in the last year to get the planned development permit to this stage finally pay off.

“We’re obviously thrilled with the decision of the Planning Commission; we feel they had great insight to approve the PD permit and deny the appeal,” said Kaval as he stood among a throng of well-wishers. “We’re thrilled to move forward with the working drawings and get closer to a groundbreaking date this year.”

Kaval also acknowledged the huge show of support from supporters of the new stadium and even felt sorry for the nearly 100 or so people that could not be accommodated inside the chamber.

“We had a very successful night,” said Kaval. “I am thrilled with the turnout, it was unbelievable and I think it really carried the day. And you heard it from one of the planning commissioners, it made a difference. The people here and their passion for the Earthquakes and the community carried the day and that is something we are truly proud of as an organization.”

While Kaval could not specify when the proposed new stadium could be opened — detailed architectural drawings are still 4-5 months away from being completed — he remained hopeful that the team would play their first MLS match in the facility sometime in 2013. That optimism was tempered later on, as an Earthquakes spokesperson offered 2014 as a more realistic stadium opening date, but Kaval stressed that a timetable had not been set and that the organization will work to set a schedule that makes the most sense for fans and the team alike.

A look at some of the other accounts of the San Jose Earthquakes historic night:

MLSSoccer beat writer Geoff Lepper provides a complete synopsis of the evening, including a very funny plea from one impassioned supporter.

San Jose Mercury News writer Tracy Seipel, who wrote a fantastic story last weekend that detailed the events leading up to the Planning Commission meeting, checks in with an account that includes comments from the commission members.

Local radio got in on the action, as KCBS's Mike Colgan reports on the decision to deny the appeal.

And partner TV station CBS5 also gave notice that the Earthquakes were ready to "Build it Now!"