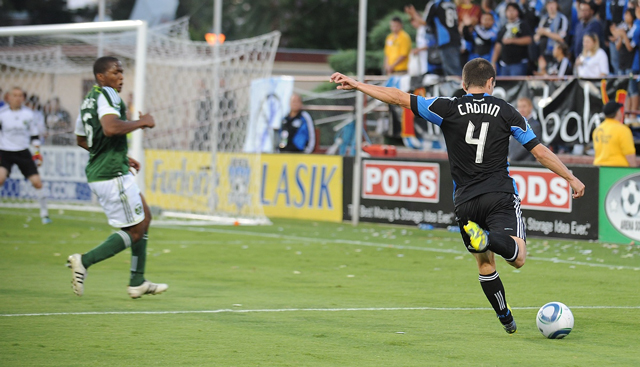 The San Jose Earthquakes started the last two weeks of their 2012 preseason with a 1-1 tie with the Portland Timbers. Unfortunately for the Quakes, both goals came off the boots of Timbers players.  San Jose kicked the game off on the clear and chilly night in Portland with about two thousand viewers online, and the Timbers Army in fine voice.

Scoring opened with a fabulously placed shot from Kalif Alhassan in the fifteenth minute, on a pass received from a short corner.  The strike hit the top right corner, with the ball just beyond the outstretched fingers of goalkeeper Jon Busch. It was Alhassan’s first goal as a Timber. The offensive breakthrough sparked the Timber’s attack, as Timber Joey’s chain saw fired up.  At this point the Earthquakes defense looked flat, and the Timbers players made the most of the defensive gaps.

The Earthquakes started to find their stride - a free kick at the 20’ mark was punched out by Troy Perkins; Shea Salinas follow up went wide left.  Salinas, back now on the right, earned the first of two corners - the first missed Rafael Baca, and a scrambling Chris Wondolowski kicked the follow up into the arms of the keeper; the second didn’t connect with an off-balance Wondo.  Steven Lenhart wrestled to the ground by Andrew Jean-Baptiste just outside the box, and in another squandered dead ball situation, Ramiro Corrales sent the free kick over the bar. For all their efforts, the Quakes did little to test the Timbers ‘keeper.

A half hour into the game and Jack Jewsbury and Sam Cronin started a pushing match, joined by Lenhart, with an ensuing melee. Wondo stepped in to smooths things over with the ref, then Jewsbury’s free kick was snared by Busch, again stretched for the deep shot. After the contretemps, Lenhart took it as his cue to ramp up the physicality of his own game, and Corrales was cautioned for a sliding tackle into James Marcelin.

Closing out the first half both teams had their chances: the Timbers pressed with Wondo dropping deeper; Steven Beitashour hooked up with Lenhart, but the Timbers ‘keeper snagged his fourth save. In the last minute of regulation, Lenhart was fouled in center circle - the free kick was lobbed by Victor Bernardez straight into the arms of Portland ‘keeper Perkins. Again the dead ball chances were squandered.

Both squads returned for the second half without any changes - save the Portland fans, who rumor has it, are now able to partake of the half time pie in the Axe stand.

The 57’ substitution of Tressor Moreno for Baca gave the Quakes fans their first chance to see Colombian playmaker, intended to sit behind Wondo. Wondo did indeed supply the Earthquakes only goal, when he sent in and inch-perfect pass to Timbers defender Hanyer Mosquera who deflected the pass - actually intended for Lenhart - neatly into the back of the net. The own-goal gifted the Earthquakes the equalizer, taking the score to 1-1.

With one hour of the match gone, the substitutions began in earnest - with peculiar preseason rules in play allowing for up to four changes.  Darlington Nagbe for Eric Alexander (60’) and Jean-Marc Alexandre for Sam Cronin (63). Soon, it was Beitashour demonstrated his defensive and offensive skills - first heading away Jewsbury’s 65’ free kick, then counterattacking deep into the Portland half.

Another period of chippiness ensued resulting in a caution awarded to Mosquera (71’) for climbing all over Lenhart, and almost immediately the yellow card wielded again by referee Drew Fisher when Beita pegged back a Portland player on the ensuing Timbers possession.

In the final twenty minutes, the game wound down with the remaining substitutions disrupting the cohesion (71’ Khari Stephenson for Lenhart for San Jose). The arrival of Bright Dike for Jorge Perlaza, with the Dee-Kay chant from the TA, had immediate impact - he made a nice break, nixed by one of several great tackles on the evening by Justin Morrow, and then a header off the crossbar.

One noticeably well executed play towards the end of the game was Salinas’ lofted ball to Wondo from distance - the pass was on target but Wondo didn’t quite control it - but it did earn a corner. A final free kick resulting from a handball in the final minutes was hit straight into the wall by Moreno. Another good chance for Portland in the 82nd minute - Jewsbury made the most noise for Portland - a shot from deep forcing a good save from Busch. Though both teams made a final substitution on the night - 78’ Lovel Palmer for Ryan Kawulok; 83’ Sercan Guvenisik for Wondo - neither squad threatened to break the 1-1 draw.

Next up for the Earthquakes is a game against Swedish premier league club AIK (Allmänna Idrottsklubben) at 5 PM Thursday March 1. The three match round robin tournament concludes on Sunday with a 7:30 PM kick-off against fellow MLS rivals Chivas USA.  Thanks to the efforts of Center Line Soccer’s own Lisa Erickson, and with Quakes president David Kaval greasing the wheels of the tricaster, all three Earthquakes games of the round robin tournament will be streamed for fans - stayed tuned to the SJ Earthquakes web site for all the preseason fun from Jeld-Wen Field.