The Retweet, Volume 7: A loss to SporKS and the addition of LennyBalls

Share All sharing options for: The Retweet, Volume 7: A loss to SporKS and the addition of LennyBalls

In The Retweet, Volume 7, Lisa Erickson takes a look at the comments and conversations going on over at Twitter as preseason training camp returns to the hallowed ground of the Nutrilite Training Facility -- do we still call it that? -- for the San Jose Earthquakes. Roster spots are at a premium, and the trialists and draft picks in camp are starting to feel the heat. Fortunately for them, Steven Lenhart is there to entertain them with his new Twitter account. Sometimes funny, sometimes poignant, sometimes informative — The Retweet promises to bring you the best tweets from in and around the San Jose Earthquakes and Center Line Soccer family.

@AnthonyAmpai being bad and getting a love it instead of a like it twitter.com/EMacMac25/stat…

The waves in arizona are really good. And by waves i mean cold stone.

If im soft, then what do u call a guy who packs a juicer in his carry on bag?? @lenny24balls @brad_evans3 #softserve twitter.com/J_Hernandez_21…

Bocce ball with the Quakes! twitpic.com/8h307o

2 a days anyone!! Hard work pays off. Enough said.

The man, the myth, the hair, the legend now on the twitterverse. Best hair in the league and best twitter pic I have ever seen @lenny24balls 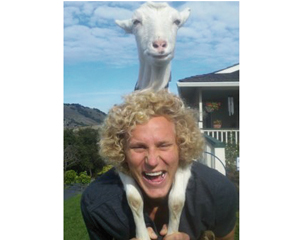 I can't tell what's more disturbing on @lenny24balls profile pic... His reaction to giving a goat a piggy-back ride or the goat's sly smirk

Very new to this rivalry but what a start! Rematch in Lawrence Feb 25th #cantwait

Good to be home!! twitter.com/AWEBS13/status…

Thank you San Jose.. My time here is done and my soccer career is headed else where.. On to the next one

SJ wanted to sign me but got word a home grown wanted tocome back.... So that's a free player for them.. Its the business

Is it bad that I enjoyed #TheVoice more than I did the superbowl? #canikeepmymancard

ATL fans, be sure to follow @lafemmeloca and welcome her as she will be joining @robertjonas as our @SJEarthquakes correspondents for 2012!

@ElliottAlmond Was told that Quakes controlled much of the first half, but SKC had run of play after Bernardez was sent off. They lost 2-1.

Center Line's @lafemmeloca guests on a Montreal MLS podcast. Tune in around minute 40 to avoid all the français: lesoccerplus.files.wordpress.com/2012/02/soccer…

Simon Dawkins travels to Anfield with Tottenham Hotspur, not in match day 18 against Liverpool. #SJEarthquakes sbn.to/ySfYnn

@robertjonas @nerdygales If the blue kits have been promoted, does that mean the white ones were relegated? #andtheysaiditwouldnthappeninMLS

The #SJEarthquakes join Columbus, Dallas, Kansas City, and Colorado as clubs without a shirt sponsor; Interestingly, all '96 #MLS originals.

@Farhadio Alright more research on SantosLaguna's site and Guzman is NOT listed as w/ club or in transfer to club; so I'm 99% think it's him

@MGQuakesFan @frankstranzl Agreed. I think this TV spot nails how @MLS teams should be selling themselves: youtube.com/watch?v=u-eah0…

Having a #SJEarthquakes supporters' soccer league is needed, similar to Sevilla FC supporters' league;support and PLAY the game.

I'm also curious as to how much of our marketing effort is in Spanish.Given Bay Area soccer demographics, should be very very high.

Read: Four from our public open tryout will compete for a spot with the first team on Monday sjearthquakes.com/news/2012/02/f…

Back to the Bay for a few days before the next adventure. 5 days until SLO...book me for a trip to Firestone's Grill 4sq.com/yQUhjL

Highlights from our match vs. #SportingKC on Saturday mlssoccer.com/video/2012/02/…

For the love of all things holy, people, it's not "the" MLS. That is all.

Antonijevic comes off after losing contact lens. PV: What do you want me to do, find it? #SportingKC