Milan, fashion capital of the world, is home to Armani, Versace and Dolce and Gabana.  Indeed, the city’s passion for fashion and soccer made for the perfect marriage when D&G created a glossy book of portraits of impeccably tailored AC Milan players in 2011.  I wonder if D&G would have been as quick to publish back in 1981, when the word ‘Pooh’ was emblazoned across the chest of each player’s kit.  Pooh - a jeans company with a name so odious that the club didn’t win a major trophy until they switched to the more mundanely named car manufacturer ‘Opel’ in the 1990s.

It strikes me that while the Quakes front office appreciated the financial input of the Amway global shirt sponsorship, the fans had a much tougher time embracing the corporate culture of what can euphemistically be called the ‘multi-level marketing’ of household products.  Amway written on the our chests might just as well have been ‘Pooh’ - as fans we were fed up of being picked on by friends at home, and by rival supporters on away trips.

My own experience came in The Pike brew pub, where after a rousing away victory for the Quakes, Seattle-ite patrons pointed, snickered and asked us what household cleaners or Nutrilite supplements we would be trying to sell them directly.  We remained good-natured guests, but we rolled our eyes and glanced sheepishly at each other; I usually have a snappy comeback, but on that occasion I quietly admitted that “I got nuthin’”.

The three year Amway sponsorship deal has not been renewed, and CLS’s own Lisa Erickson has already proposed possible solutions to resolve the revenue-free status of the bare-chested shirts of the 2012 San Jose Earthquakes.  In the meantime, fans can now spend their hard earned cash on sponsor-free jerseys: Quakes in black, Quakes in blue or Quakes in white; maybe all three.  A new sponsor will eventually be found, and optimistic fans believe that the next shirt sponsor will be a more acceptable one than Amway, one that we will be less reticent to defend.

But what if it’s not?  What if the next shirt sponsor makes us pine for the good old days of household cleaners, energy bars and health supplements?  What if the new sponsor provides an even less palatable alternative?  Hoping to nix any unsuitable contracts before they get signed, here’s my top ten list of undesirable shirt sponsors to be avoided: 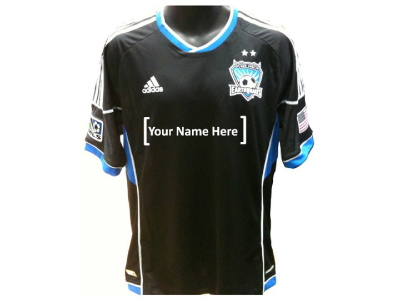 In the absence of a sponsor, the Colorado Rapids are rewarding their 2012 season ticket holders with their own signature on this season’s shirt.  Maybe the Earthquakes could sign up Sharpie so we can all sign one another’s new empty shirts with their cool silver-inked pens?   You’ll need to buy your unadorned 2012 San Jose Earthquakes shirts now, but if you feel the need to emblazon the blank canvas on your chest with an advertisement, use your own best judgement, and please avoid the sponsors listed above.

Who will you be wearing this year?