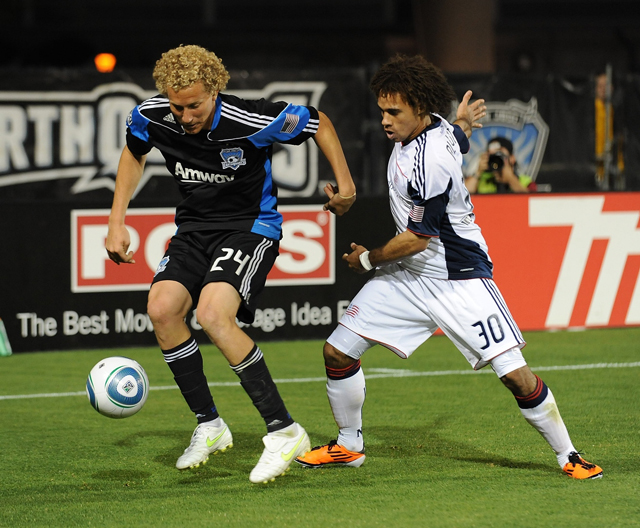 With MLS First Kick in full effect, every team in the league harbors thoughts and dreams of making into the postseason. After all, isn’t that what the preseason is all about — a clean slate of matches that can only be decided by the players and not the pundits? With that in mind, Center Line Soccer still feels compelled to take a look at some of the questions and issues surrounding the San Jose Earthquakes entering the 2012 season.

Chris Wondolowski has proven that his 2010 campaign was no one-hit-wonder by nearly earning a Goldon Boot double last season. However, with a refigured offensive unit in 2012, who will step up to ease the scoring load off the man they call Wondo?

Lots of candidates for this honor, but the leading man must be the blonde-haired instigator at the front of the formation Steven Lenhart. Making a return to the team after a family leave caused him to miss the last three months of the 2011 season, Lenny comes into camp full of vigor and energy to reward the Earthquakes for their loyalty to him during tough times. He opened the preseason camp winning the dreaded “beep test” fitness run and at times of the past two months has been asked to slow it down to prevent flaming out too quickly. Lenhart will be the yin to Wondo’s goal scoring yang on the Earthquakes forward line, and is sure to bang in a few goals of his own in that promising partnership.

Woe the defense. Following a less than stellar 2011 across the back line, including a horrendous record at holding a lead — second worst in MLS last year, the Earthquakes need to shore up the back or be forced into some wild contests this season. Has the San Jose brain trust done enough to keep the ball out of their own net?

Foremost, the Earthquakes did the right thing by securing the services of goalkeeper Jon Busch for another three year deal. Not only has the veteran ‘keeper proven that with age comes wisdom, his cat-like reflexes only seem to be getting sharper every season. If not for the late season heroics of Wondolowski on the offensive side of the ball, Buschy would have run away with (perhaps walked away with, ‘keepers are notoriously poor runners) the team MVP in 2011.

Hopefully in order to make Busch’s time in net a bit easier this season, the Earthquakes welcomed back from injury defender Ike Opara and signed Honduran defender Victor Bernardez to rule the area. The two will not start together against the Revolution in the opener — Justin Morrow will start in place of Opara, just rewards for his solid preseason efforts at the center back position — but are likely to command the Earthquakes back line before the spring is over. The only wildcard in all this is Opara’s impending call up to the U.S. Men’s National Team U-23s Olympic qualifying team. He’ll miss significant time for San Jose, but should be covered by Morrow and Earthquakes veteran Jason Hernandez in the mean time.

Counting Ramiro Corrales on the right side and up and coming Steven Beitashour on the left and the Earthquakes don’t look all that bad on defense. Given that Bernardez is expected to be a big upgrade over expansion drafted Bobby Burling in the middle, and San Jose might have done just enough to keep games close when needing a goal and in the lead when they are already ahead.

Logjam in the middle! One place the Earthquakes do not seem short on talent on the roster is at the midfield position. However, with so many players deserving a shot at the starting XI, who gets to make their mark and who gets familiar with the Buck Shaw Stadium benches?

With much fanfare, the Earthquakes signed Mexican league veteran and Colombian international Tressor Moreno early in the preseason. The attacking midfielder with the uncanny ability to connect passes from wing to wing is still not at full fitness, so he makes way for second year stud Rafael Baca in the season opening starting line-up. Moreno might rue that his lack of fitness has cost him a starting spot because Baca has shown the ability to lock down that position among the dozens of midfielders that seem to populate the daily Earthquakes training sessions. The young Mexican has developed into a reliable distributor of the ball in his short time in San Jose, and seems to have the trust of head coach Frank Yallop to play the #10 in his offensive scheme. If Baca can step up to that role early in the 2012 season, then Moreno may play more the cheerleader than the playmaker.

On the wings comes the difficult decision of what to do with three players — Marvin Chavez, Shea Salinas, and Simon Dawkins — all capable of giving the Earthquakes a big lift on offense. After a slow start for both Chavez and Salinas, the right and left wingers respectively have grown into their roles with aplomb and stand to earn the major starting minutes in the opening weeks of the MLS season. But Dawkins will not sit idly on the sidelines for long, and if he can be successful in the role of super-sub early on in 2012, he will find himself on the starting XI line-up card before the calendar turns to spring.

Are there more questions for the Earthquakes going into the season? You bet! And in the coming weeks, Center Line Soccer will address them against the results of the opening matches of the season. All in all, the pieces seem in place for a bounce back season in San Jose. Tonight’s season opener against the New England Revolution will be the first chance to see how they fit together.