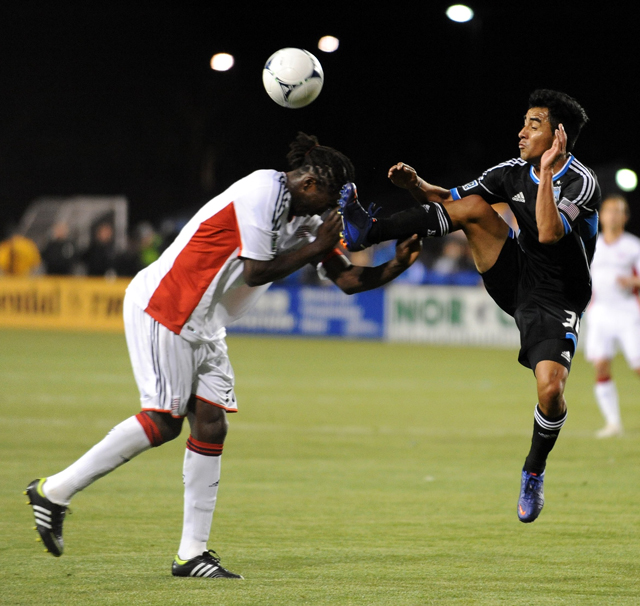 (Santa Clara, CA) For the first time since re-joining MLS in 2008 San Jose opened their season with a win, as Chris Wondolowski scored in the 15th minute to lift the Earthquakes past New England 1-0.

“It wasn’t our prettiest game,” Wondolowski said. “To a man we missed a couple passes we normally don’t miss. But last year, we’d end up losing a game like this, or tie 1-1, so it’s nice to grind it out and get a win.”

On a night where both teams struggled in the final third of the field, San Jose won most of the midfield battles, and took all three points by cashing in a scarce scoring chance.

The goal came when Shea Salinas stole a Shalrie Joseph pass near the midfield stripe and charged forward, slipping a pass through the center of New England’s high line to send Chris Wondolowski in alone on goal. Matt Reis came off his line to challenge the shot, but Wondo calmly fired a right footer from inside the arc, and beat the New England goalkeeper cleanly.

“I saw Shalrie didn’t have many options,” Salinas said, “so I jumped a little bit, intercepted it, gave the ball to Wondo and started celebrating. Right when I passed it to him, I knew he was going to score.”

“Shea (Salinas) was a man among boys tonight,” Wondolowski said. “He was everywhere, up and down the flanks. On the goal, he was in a great spot. With his speed, he was able to intercept that ball, timed it perfectly, and put it on a platter.”

It was the first time San Jose has scored in a season opener since the re-birth of the franchise in 2008.

It’s a new season, and there are a lot of new names to the San Jose lineup. Midfielder Tressor Moreno didn’t get off the bench, but the Earthquakes’ starting eleven included Victor Bernardez at center back, Marvin Chavez on right side of midfield and Shea Salinas on the left. In addition forward Steven Lenhart returned to action for the first time since last July 20, starting alongside Chris Wondolowski at forward.

It was Bernardez who made the biggest difference, anchoring the back line and keeping New England from doing much to bother goalkeeper Jon Busch. “Bernardez played well, very assured and solid, like he knew he’d be,” coach Frank Yallop said. “Victor’s presence and calming influence were needed tonight.”

The only save either goalkeeper made all night came when Jon Busch scooped up Benny Feilhaber’s 25 yard roller just before half time. New England’s only real threat at scoring came late in second half stoppage time, a blast from Feilhaber from the top of the arc that whistled just wide of the left post.

“It’s like a cup final to us,” Yallop said. “We won the cup final. Now we can build on it, get some confidence back in the guys, and get better in the final third.”