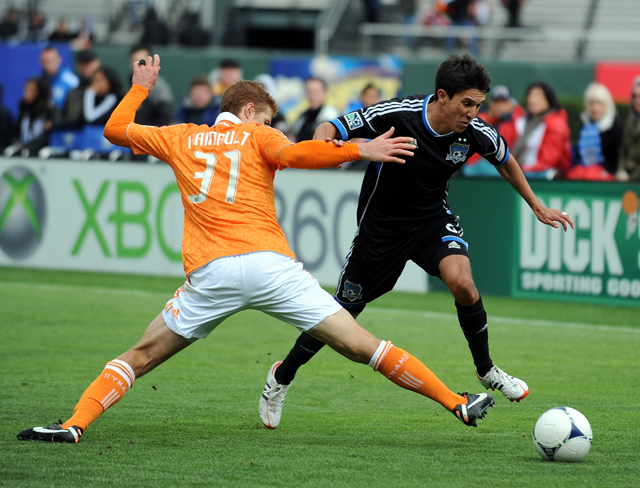 (San Francisco, CA) Game two of the 2012 season was the exact opposite of the season opener for the San Jose Earthquakes. Against New England last week, the San Jose offense struggled, creating just 5 attempts on goal, and only 1 that was on target, yet the Earthquakes prevailed 1-0. Saturday afternoon, San Jose was credited with 22 attempts on goal, including several quality scoring chances, but this time the ‘Quakes were on the losing side of a 1-0 decision.

On a wet and windy afternoon at AT&T Park, most of the fans filing in for the Mexico vs. Senegal exhibition that followed the MLS match missed the game’s lone goal. In the 14th minute, Adam Moffat lobbed a pass into the penalty area for Brian Ching, and when Jon Busch came off his line to challenge the pass, he ran into the Houston forward. Referee Chris Penso awarded the penalty, and Brad Davis banged it home to give Houston their second straight 1-0 win this season.

San Jose coach Frank Yallop didn’t agree with the referee’s decision. “The ball’s kind of going out of bounds, and it’s not a goal scoring opportunity, so I’m not sure why he called the penalty kick,” Yallop said. “I don’t think Brian Ching was going to score. He was in a bit of a tussle with Victor (Bernardez). Jon comes out and commits himself, which may not have been the best play, but you have to think about the consequence of giving the penalty.”

“And, we had a hand ball that clearly strikes the players hand on Wondo’s shot (in second half stoppage time) and he didn’t call it,” Yallop said. “Frustrating.”

On St. Patrick’s Day, the Earthquakes’ black jerseys sported green names and numbers on the back instead of white, and San Jose's lineup offered some other new looks as well. The Earthquakes made one change in the starting 11 that beat New England last week, with Khari Stephenson in midfield, pushing Rafael Baca to the left wing and Marvin Chavez to the bench. In the second half, Tressor Moreno and Sercan Guvenisik saw their first MLS action, as San Jose tried to find a game tying goal.

The game opened well for San Jose. The ‘Quakes came close to scoring in the eighth minute when Chris Wondolowski raced in front of goalkeeper Tally Hall to chase down a long throw in from Ramiro Corrales. Going away from goal, Wondolowski tried to flick the bouncing ball on target, but missed wide left.

After Houston took the lead through Davis’ penalty kick, Wondolowski had another chance just past the half hour mark. Steve Beithashour sent a long ball into the box for Steven Lenhart, who laid it off for Wondo at the top of the arc, but his shot sliced wide right.

As the rain came down, San Jose missed a couple more chances before halftime. A long diagonal ball from Ramiro Corrales was headed over the top of goal by Lenhart in the 38th minute. Seconds before intermission, Rafael Baca hooked in a cross from the left wing to an open Khari Stephenson, but Stephenson’s header was nowhere near goal.

Marvin Chavez replaced Baca to start the second half, and brought some spark on the right wing, drawing two Houston yellow cards in the next quarter hour as San Jose pressed forward. In the 61st minute, a long ball from Shea Salinas was flicked on by Lenhart to Wondolowski. Wondo fought off a pair of defenders and hit a left footer from 15 yards that was punched away by Houston’s Tally Hall.

Searching for the equalizer, San Jose replaced Stephenson with Tressor Moreno and had Sercan Guvenisik come on for Sam Cronin, but neither man could make the difference.

Moreno set up Shea Salinas for a shot from the left wing in the 81st minute, but Salinas missed wide, hitting the side netting.

In stoppage time, Wondolowski  was knocked down by Jermaine Taylor as he dribbled into the penalty area, and was awarded a free kick from just outside the box. Wondolowski’s shot hit the wall, and, he claimed, a Houston player’s arm, but the appeal for a hand ball and a penalty kick were denied.

“Other than the result, the team’s performance was good,” coach Frank Yallop said. “We didn’t given them much. But you’re not going to win games where you don’t score. And, we had good chances to score. It wasn’t like we weren’t creating anything.”

With a 1-1-0 record, the Earthquakes now travel north of the border to face Toronto FC next Saturday.