The first road trip of the San Jose Earthquakes 2012 season is upon us and Nerdy Gales highlights the obstacles for MLS fans and players alike that must be overcome with travel to away games - frequently  in distant states, sometimes in distant lands, and often with the symptoms of jet lag.

The first road trip of the 2012 San Jose Earthquakes season takes them across the border to the northern land of maple syrup, Mounties and metric cleats for their game in Toronto - their second comes close on its heels the following Saturday to Seattle to face the Sounders.  The former trip is a 2253 mile (or 3626 km if you set out from Toronto) round trip up north across three time zones and requires a passport to cross The International Boundary, an English-French dictionary, and enough Canadian dollars to buy chip butties at BMO Field.

Growing up in Britain, I had never fully grasped the vast expanse that is the USA .  Apparently, I was not alone amongst my compatriots - a friend called one afternoon when he had a six-hour layover in Cincinnati and wondered if I might like to help him pass the time by sinking a few beers.  Ordinarily I would be more than happy to oblige, but my apartment was in Baltimore - 510 miles and an eight hour drive way; no airport bar is worth that trip.  I guess the distance between the two cities looks much smaller in the map at the back of the  in-flight magazine, especially when you’ve grown up in England - a mere 50.3 thousand square miles (which would be 32nd largest state after Louisiana) compared to the USA at 3.8 million sq miles. 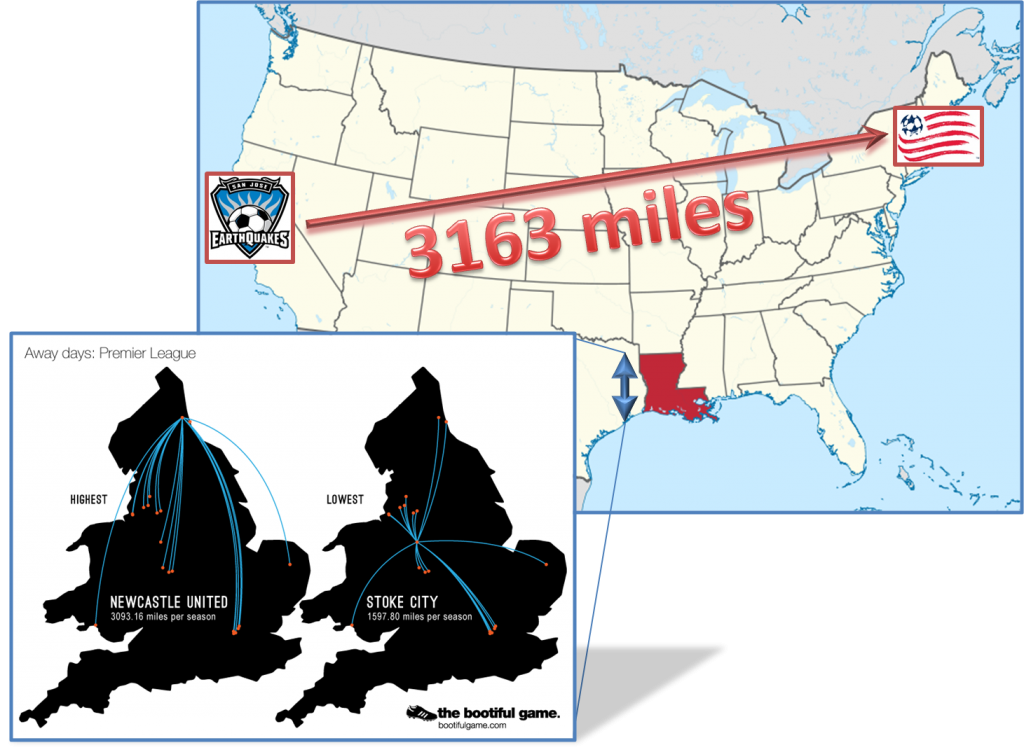 Compared with England, and using the Premier League as my frame of reference, the largest distance between two teams lies between St. James’ Park to Stamford Bridge - 287 miles driving distance from Newcastle United’s Alan Pardew to Chelsea’s latest  [insert manager-of-the-month's name].  In fact, within the season, Newcastle United is the most traveled EPL team, with an annual total of 3093 miles.  Transfer these distances to MLS, and The Magpies travel less distance in their entire season than the San Jose Earthquakes do in a round trip to nine of their eighteen rivals.  At the other end of the EPL spectrum, centrally located Stoke City travel a paltry 1597 miles in a season, which would get the Quakes as far as LIVESTRONG Sporting Park in Kansas City, but wouldn’t be far enough for them to find their way to BBVA Compass Stadium  in Houston.  If there's one benefit to the unbalanced 2012 schedule, it's the reduced burden of cross-US travel for fans and players of every team this season.

Clearly distances between teams are an order of magnitude larger in MLS than the EPL.  Just like Newcastle, San Jose lies on the periphery of its nation and the Earthquakes team has one of the largest total distances travelled throughout the season.  I was surprised to discover that the farthest distance between any two MLS teams is the 3163 miles the Quakes travel  when they visit the New England Revolution - that’s almost the same as from London, England to Portland, Maine.  Scanning the SportMapWorld.com MLS mileage chart, and making the assumption that five hours or approximately 350 miles to be the farthest distance a fan would consider driving, then only 40 of 342 (12%) possible match ups between the nineteen MLS teams fit my criteria - and three teams (Real Salt Lake, Sporting KC and the Colorado Rapids) have no drive-able rivals.  Supporters groups of the mid-Atlantic coast teams have most frequent access to away games with travel along I-95 between New York, Philadelphia, Washington and Boston.

At a certain point, the distances become large enough to warrant scouring the Internet for cheap flights to away games, and present two of the larger obstacles for the traveling MLS fan: expense and time (which, of course, is also money).   The road trips become expeditions, with a Quakes fan's journey from the east to west coast chewing up enough travel time and loss of time zones that it takes up an entire weekend, and maybe requiring a day off work for a Saturday game.  Despite these hurdles, there is evidence that in general road trips are becoming more common, and to the extent that the Independent Supporters Council (ISC) recently ratified a charter to create common standards for away fans in MLS.  The ISC has representatives from 16 of the 19 teams - including the Casbah of the Quakes - and aims to improve the experience for away travelers.  English football supporters' advocate Dave Boyle outlined the charter recently in The Guardian: “MLS has started to create standard practices and these can be improved further if the league communicates with supporter representatives from the ISC who can provide advice based on a wealth of shared travelling experience”.  He raised the interesting possibility that American supporters could have a larger influence over MLS than their EPL counterparts: with most MLS stadiums not filled to capacity the clubs have more incentive to fill seats, perhaps drawing on increasing numbers of away fans; such an incentive is missing in the EPL where matches are usually sold out.

So, after spending valuable time and money and coordinating your trip to the away stadium, perhaps with your supporters group, what can the travelling fans expect from the performance of their favorite players after going the distance across country?  Travelling from the west coast to the east coast is arduous, and Tweets from the players usually indicate who scored a window seat, and who got the chubby middle-seater – it’s obvious that these guys are not travelling in style; it’s economy all the way.

The huge travelling distances also present the phenomenon of circadian advantage – scientific research had previously shown the negative effect of coast to coast travel on the performance of baseball teams.  Teams with a three hour time-zone disadvantage to their home rival are likely to lose 60% of the time, compared to 50% of the time when they are equal.  The same research shows that for every time zone crossed, synchronization to that time zone requires one day.  Since the Quakes tend to leave northern California for their away games on Thursday afternoon for weekend games, the game scheduled for 1 PM Saturday afternoon (or 10 AM on the Californian biological clock) would mean they should only have been disadvantaged by one hour, which minimizes any advantage to Toronto FC to 51.7%.

Despite my concerns for the game's outcome being allayed by this level-playing-field statistic, it's well understood that disrupting circadian rhythms can cause such short-term effects as irritability, difficulty concentrating, fatigue, disorientation and gastrointestinal disturbances.  I know I can experience any four of these five symptoms just watching a close game - home or away.