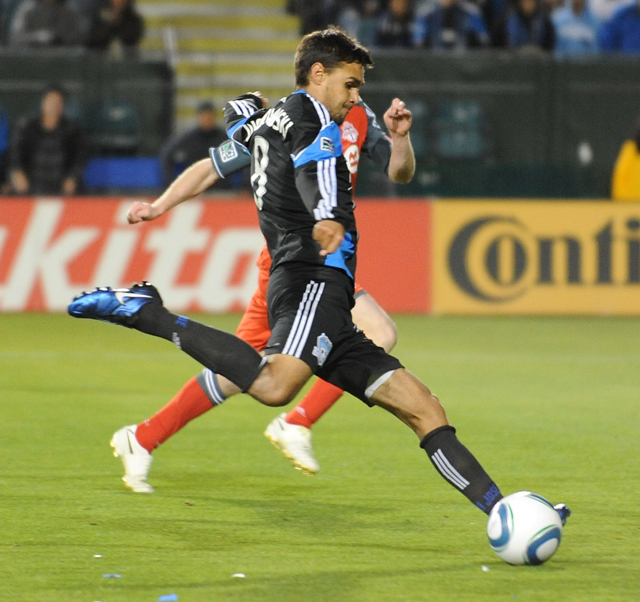 The Earthquakes got back to business this week at the team’s training facility, doing their best to put the difficult loss to Houston in the past and getting themselves ready for a long away trip to face Toronto FC in week three of the MLS season. While the defense again was stout — a second straight game without a goal scored from the run of play — the offense took a page from their rather forgettable 2011 playbook in failing to finish on a plethora of scoring opportunities.

Perhaps most glaring about the 1-0 loss to the Dynamo at AT&T Park last Saturday was how much the Earthquakes attacking corps was stymied by the Houston defense. The lessons learned from last season were forgotten in the preparation and execution of a strategy that seemed more reactive than proactive. Leaving speedster Marvin Chavez on the bench, and moving Rafael Baca to the wing in order to make room for Khari Stephenson was a gamble that did not pay off for head coach Frank Yallop.

“I just changed one player,” explained Yallop earlier this week after training. “I inserted Khari because of his height, which is the only reason I did it, and it wasn’t the reason we won or lost the game. I thought Khari had chances to score two goals — one header and one shot. He did a fine job on set plays which is not playing into anyone’s hands but to make sure we don’t get scored on which we didn’t. We did a terrific job of that, and we created eight chances to score. On another day we win 5-1 and it is the best move I’ve ever made.”

Given the state of Toronto FC’s defense, which will be without franchise player Torsten Frings for Saturday’s match against the Earthquakes (kickoff is scheduled for 10 a.m. PDT, so get up early and enjoy breakfast with the Quakes), coach Yallop is expected to return Stephenson to the bench and either slide Baca back to his more natural attacking midfielder role, or choose to start the game with Colombian playmaker Tressor Moreno. The 33-year old has made two appearances off the substitutes’ bench the last two weekends, but is rounding into playing shape while also getting better acquainted with the physical style of play that is an MLS trademark.

“Tressor is training well and moving great,” shared coach Yallop. “I think he now realizes we have a physical league. He had that calf injury that kept him out for three weeks, so he couldn’t train properly and he was hobbled by it, but now he’s fully fit and looks great. Whether he starts or not on the weekend, I think at this point he is ready to play. He has the ability to unlock defenses which is an uncanny knack that most players do not have. We’ll see what we do on the weekend, but he is ready to go, and he looks good right now.”

Moreno entered the match against Houston last Saturday in the 64th minute, and immediately had an impact on the Earthquakes attack. Playing centrally behind the forward partnership of Steven Lenhart and Chris Wondolowski, Moreno worked to distribute the ball side to side, but also kept the Dynamo defense honest with his head-forward play in the center third of the field. He slid a perfect through ball to Shea Salinas on the left wing in the 81st minute that the Earthquakes winger should have done more with, but Moreno also failed to capitalize on a later drive into the offensive third when he made an ill-advised cross-field pass that found empty space, but was too heavy for even the right winger Chavez to collect. For his 27 minutes of play in MLS week two, Moreno showed that he has the skills to make an impact for the Earthquakes.

“He opens the game up and sees it differently to a lot of the players we have, so I thought it was good,” assessed coach Yallop. “It took him awhile to get his rhythm and the length on his passes, but once he did I thought his pass to Shea was excellent when he played him in (shot into side netting). I think his general play was positive, so that was good.”

One player that did not see the field last week was Simon Dawkins. The Tottenham loanee was conspicuously rooted to the bench at AT&T Park, and was passed over for a substitute’s role by another new face for the team in forward Sercan Guvenisik. The German born Turkish striker did well in his 10 minutes of limited action, and would likely have opened his MLS scoring account if Salinas had pulled the ball back into the six-yard box on his ill-fated 81st minute shot attempt. With target forward Lenhart struggling at times with the match, coach Yallop has some decisions to make on what starting line-up he will present to Toronto FC on Saturday.

“I like the options,” said coach Yallop of all the healthy players he has at his selection disposal. “We may change it again for the game coming up because we feel a certain way that they play could play into our hands if we play certain players. It is not about chopping and changing the line-up; it is about using your squad and making the right decisions and I think we have some good players that want to play and are excited to play.”

If patterns are to be believed, expect some changes to the Earthquakes starting XI for Saturday’s match at BMO Field in Toronto. When the team is winning, the same starters tend to get the call, but when the team struggles, moves are often made and players reorganized into a new line-up. Will Moreno get his first start in MLS this Saturday? Will Dawkins and Guvenisik pace the team from the substitutes’ bench? Will Lenhart continue his partnership with Wondolowski on the forward line? Will the Earthquakes continue their unblemished record against Toronto FC north of the border? An early Saturday morning kick-off will reveal all those decisions, and the Earthquakes fortunes in week three of the MLS season will subsequently be determined.

“We’ll see what we do this weekend,” said a poker-faced coach Yallop earlier this week, “but I am excited about going into this game with a good game plan and trying to win it.”